Moving on to offshore bites 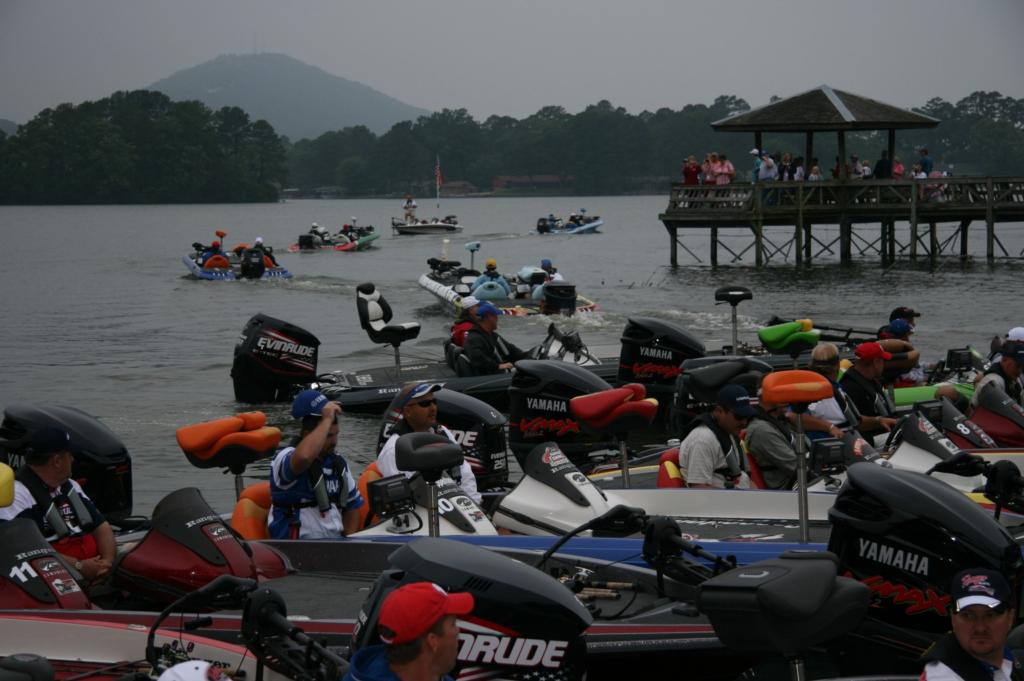 With Mount Riante peeking through morning haze, first-flight anglers head into Lake Hamilton for the start of the BFL All-American. Photo by David A. Brown.
May 29, 2008 • David A. Brown • Phoenix Bass Fishing League

HOT SPRINGS, Ark. – It’s a deep subject, but if anyone can figure out where the Lake Hamilton bass are holding, it’ll be the accomplished anglers manning 54 boats for the 25th annual Wal-Mart Bass Fishing League All-American presented by Chevy.

Two weeks before the tournament, Allan Cagle of Deltona, Fla., found a solid bite in shallow water, but 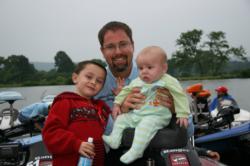 Wednesday’s official practice day told him that change was afoot. “I think there will be some fish caught shallow, but the offshore bite is picking up. These fish are in transition, so I’ll be hitting the shallow and deep bite.”

Some, like Benton, Ky., pro Chuck Rounds will probably focus on the deeper action, which seems to be the most dependable. Before heading to the launch site, Rounds was rigging up a 5/8-ounce football jig with a green-pumpkin tube. This, along with a 10-inch Berkley Power Worm, will comprise his deep arsenal. 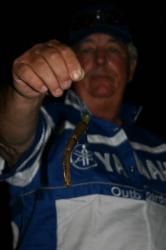 Rounds will stick with a slow presentation, but noted that the Lake Hamilton bass are not terribly picky. “They’ll bite just about anything. You just have to find them.”

Kim Carver of Milledgeville, Ga., hopes to sack five close to the shore and then head out deep. “I’m starting out shallow to hopefully get a limit on a topwater or spinnerbait, and then I’ll be out fishing deep the rest of the day.

“I’m going to throw a deep-diving crankbait, hoping that a bigger fish will hit it. I (want) to have a limit by the time I go out to crank.”

Targeting 10 to 15 feet, Carver will throw mainly a shad-colored crankbait, but he said dingy water from 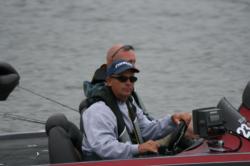 recent rains may require a color change. He’ll go to a chartreuse pattern in stained water.

Lake Hamilton is not known for producing monster bass or huge stringers, so Carver said he’s setting realistic goals for himself. He’d like to catch a couple of 2 1/2-pounders and end up with about 10 pounds a day.

“Ten pounds is a good average on this lake,” he said. “If you can do that, you’ll put yourself in contention to win.” 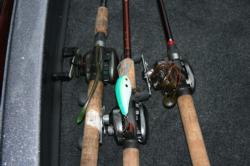 Although Carver said he has reliable spots identified at the north end of Hamilton, he doesn’t expect to make the run. “I’ve been told by a friend who live out here that the biggest fish in the lake live around the boat ramp, so I probably won’t leave sight of the boat ramp today. (In practice) I burned an eighth of a tank of gas.” 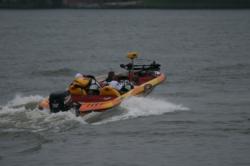 also advance to the $2 million Forrest Wood Cup in Columbia, S.C., Aug. 14-17, where the boater will compete with top anglers from the Wal-Mart FLW Tour, Wal-Mart FLW Series, Stren Series and The Bass Federation for as much as $1 million – the sport’s biggest award.

The entire field competes Thursday and Friday for an accumulated two-day weight. The top 10 boaters and 10 co-anglers advance to Saturday, and the winners are determined by the heaviest three-day weight.