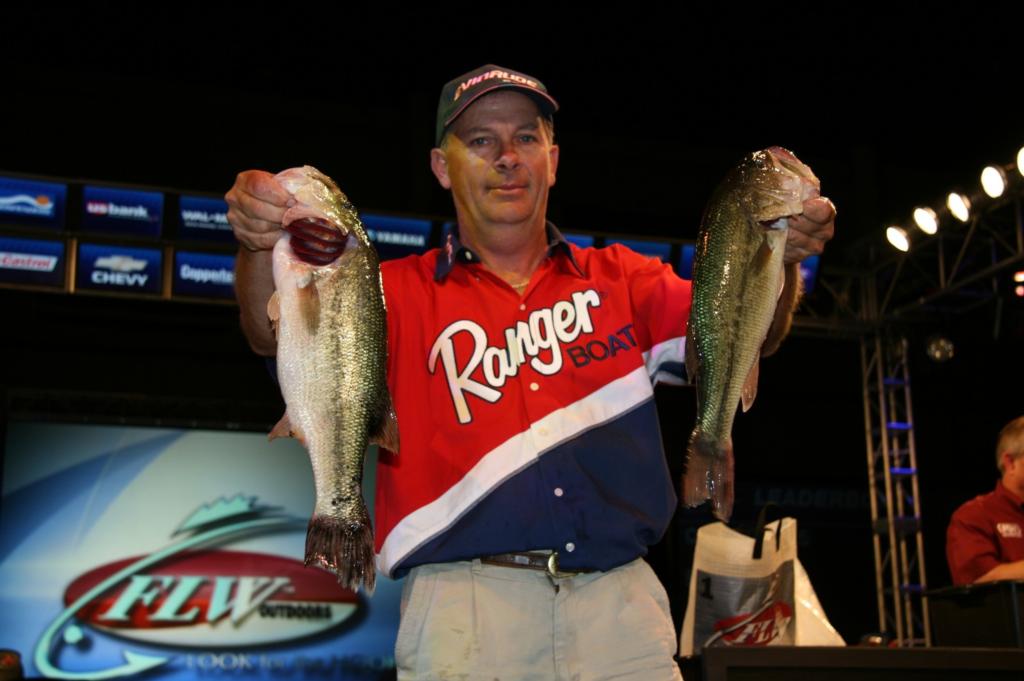 HOT SPRINGS, Ark. – Some folks celebrate their birthdays by treating themselves to a new outfit; others go for jewelry, while still others splurge on high-end electronics, art or imported chocolates. For top boater Kim Carver, another Wal-Mart BFL All-American win – this time at the Lake Hamilton event presented by Chevy – would make a fine gift.

Carver bagged his first All-American title on May 27, 1998, in La Crosse, Wis. That victory on the Mississippi River came three days before his 43rd birthday. Presently leading with 11 pounds, 6 ounces, Carver welcomes birthday No. 53 on day two.

On the potential for replicating his feat of a decade prior, the Milledgeville, Ga., resident said: “I gave myself a nice birthday 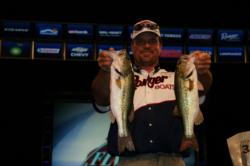 Posting the only double-digit bag of day one, Carver said he entered the tournament confident in his ability to catch a solid limit. However, two fish over 3 pounds – including a 3-13 – pleasantly surprised him.

“The two big fish are the biggest I’ve ever caught out of this lake,” he said. “As soon as my partner netted both of those fish, the hook fell right out of their mouths and into the net. I was very fortunate.” 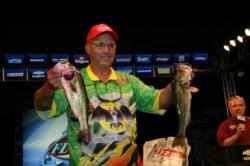 Carver started his day intending to fish shallow until he secured a limit and then head to deep water, where he would throw a deep-diving crankbait for larger fish. As it turned out, the shallow water produced all of his fish. Most hit a shad-colored Zara Spook, but he also caught one of his weight fish on a spinnerbait.

“I caught all of my fish before 12 o’clock today, and they all came of the shoreline,” Carver said “It worked out 100 percent opposite (of what I expected). And that’s why we call it fishing – we never know what’s going to happen.”

Overcast skies that lasted nearly until the end of day-one fishing presented good topwater conditions. Carver said that he looked for a certain shoreline scenario, but ended up catching fish in a variety of habitat. 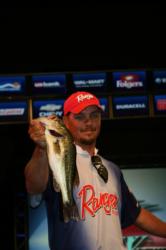 dock. You’ll catch one out of a patch of grass. There is no rhyme or reason where the next one is coming from.”

The day-two forecast calls for sunny conditions, so an extended topwater bite will probably not occur. Nevertheless, Carver is ready to defend his lead and enjoy his birthday on the water.

“I’d rather have it cloudy, but I’ll take whatever the good Lord gives us, and we’ll go fishing.” 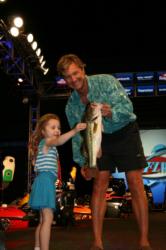 Rounding out the top 10 boaters at the BFL All-American: 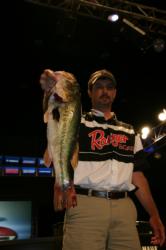 In third place, Blake Wilson of Prattsville, Ark., has 8-3, while Kenneth Hunnicutt of Jacksonville, Fla., took fourth with 6-8, and Tim Austin of Williston, Vt., placed fifth with 6-6.

Rounding out the top 10 co-angler leaders at the Stren Series Clear Lake event:

Praise from a pro

At the weigh-in’s opening, Wal-Mart FLW Tour pro Dion Hibdon opened the show with complimentary words for the Bass Fishing League. Hailing the BFL anglers as the toughest competitors around, Hibdon lauded the organization’s efforts to promote bass fishing at the grassroots level.

“The BFL has always been a starting point for fishermen to get into tournament competition,” the Chevy pro said. “You really do care about the future of this sport, and my hat’s off to you. You really work hard at this.”