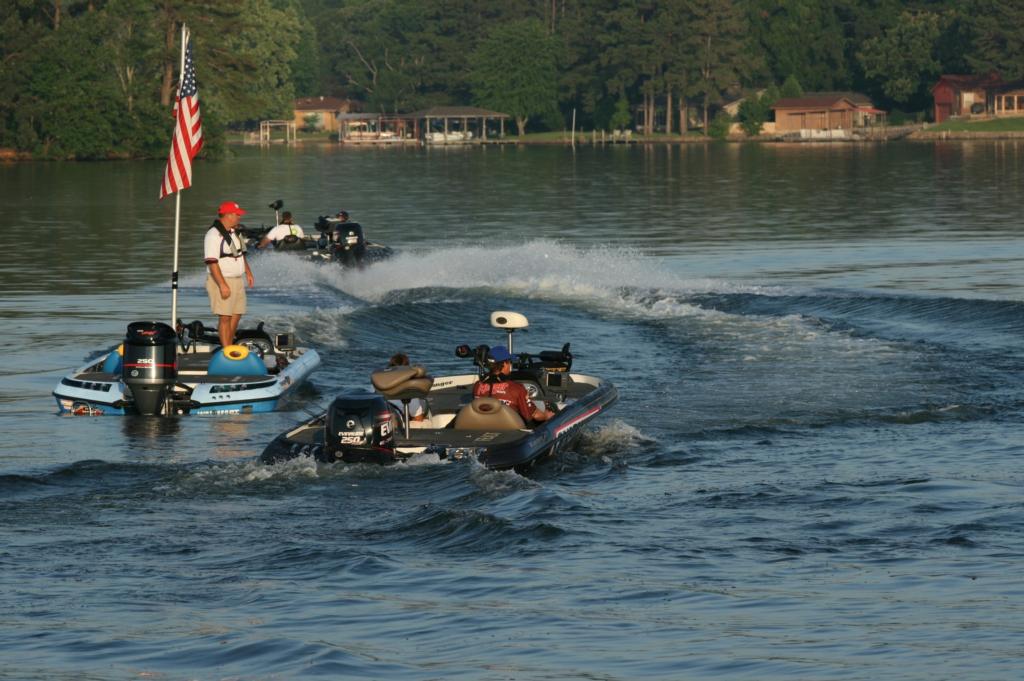 The first and second-place boats take off as the final round of BFL All-American action started with sunny skies and light wind. Photo by David A. Brown.
May 31, 2008 • David A. Brown • Phoenix Bass Fishing League

HOT SPRINGS, Ark. – A gaggle of Canada geese searched for breakfast in the dew-dampened grass on a hill overlooking Fish Hatchery Ramp. Feeding one bug at a time, their diligent foraging mirrored the task of boater and co-angler finalists fishing Lake Hamilton in the 25th annual Wal-Mart Bass Fishing League All-American presented by Chevy.

After two days of thorough pickings by a full field, the finalists will have to look hard for productive 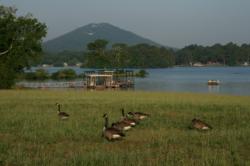 waters as weekend boat traffic guarantees plenty of company. For all competitors, success or failure will hinge on time management and bite optimization. Those who make the right decisions and catch everything they hook will fare well.

Day three brings mostly sunny skies and light breezes; somewhat of a synthesis between the calm, overcast conditions of day one and the bright, windy weather of day two. A morning topwater bite could offer make-it-it-break-it potential, but once the sun hangs high and fish head for depth or cover, the real hunt begins.

Leading the boater field since day one, Kim Carver of Milledgeville, Ga. caught the event’s only double-digit stringer (11-6) on day one, but struggled on day two with just 5-7. Seeking his second BFL All- 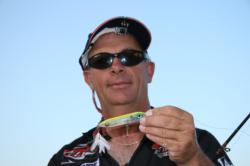 American win (his first: 1988 in La Crosse, Wis.), Carver said he’ll start with a surface bait and work deeper as the day warms.

“I have to go throw my topwater plug this morning and hope for one bite – two would be fantastic,” he said. “I got one yesterday (on topwater), but it wasn’t as big as I wanted. I could go over (to my spot) and catch another big one, which on this lake, a 2 1/2- to 3-pounder is a big fish. One fish like that would put me on the edge of locking in the victory.”

Less than a pound back at 16-1, second-place boater Shayne Berlo of Vienna, Va. hopes he can make 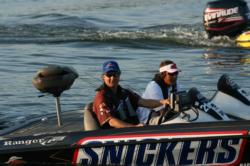 it three consecutive days of finding the kicker fish. On day one, his 4-pound, 1-ounce fish took Snickers Big Bass honors and one nearly 3 pounds on day two helped move him up from fifth place.

“My success has been predicated on finding one big fish per day,” Berlo said. “I have to get another big fish today, or multiple big fish would be nice.”

Both of Berlo’s big fish bit jigs, but as a self-described “junk fisherman,” he’ll try a variety of baits to try and identify consistent patterns. His big-fish jig will definitely get wet today. 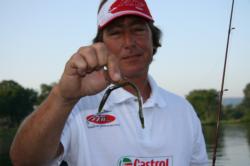 the Big Bass award by one ounce, but it anchored the day’s heaviest stringer in both divisions – 9 pounds, 2 ounces – and moved Roy up 27 spots. Roy caught most of his fish on a wacky-rigged watermelon Zoom trick worm. He hooks the worm Texas style for a go-anywhere weedless presentation.

Third place boater, Terry McWilliams of Greenfield, Ind. maintained his position from day one, despite a small limit. He caught 9-14 on day one and followed with 5-5. He’ll rely mostly on his trademark “Stupid Tube” – a 1/8- or 3/16-ounce jig with the head positioned inside a green pumpkin tube.

McWilliams said the day’s bright conditions should favor his preferred bait. “When it’s sunny, that pushes the fish back under docks and cover, and this bait works very well in (these scenarios).”

The BFL event, which runs May 29-30, assembles 108 anglers from 26 states and offers a top boater 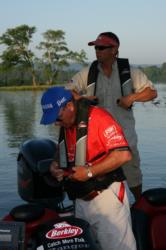 award of $140,000 and a top co-angler award of $70,000. The boater and co-angler champions will also advance to the $2 million Forrest Wood Cup in Columbia, S.C., Aug. 14-17, where the boater will compete with top anglers from the Wal-Mart FLW Tour, Wal-Mart FLW Series, Stren Series and The Bass Federation for as much as $1 million – the sport’s biggest award.

The entire field competes Thursday and Friday for an accumulated two-day weight. The top-10 boaters and co-anglers advance to Saturday, and the winners are determined by the heaviest three-day weight.