Drama to the very end 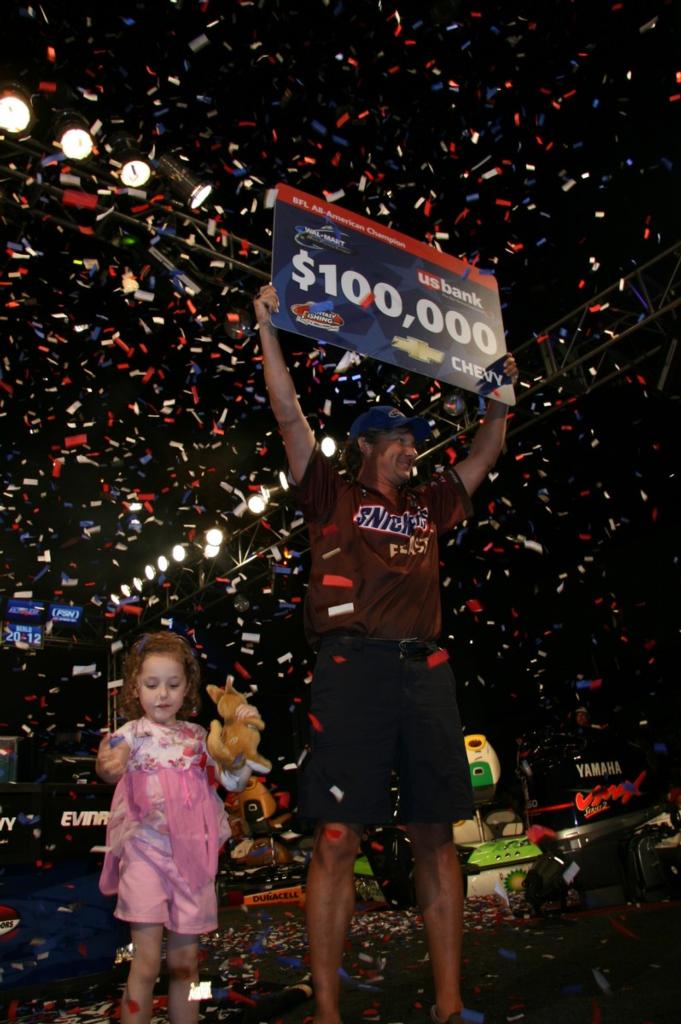 HOT SPRINGS, Ark. – Kim Carver made his mark on the final weigh-ins of the 25th annual Wal-Mart Bass Fishing League All-American presented by Chevy, and it wasn’t for a victory. It was the way he passed the torch, so to speak, to top boater Shayne Berlo.

One of the endearing tendrils of tournament fishing is the sportsmanship shared among competitors. Carver – a past All-American winner and this event’s top boater for days one and two on Lake Hamilton – capped a truly dramatic weigh-in with the kind of showmanship you just can’t script.

Here’s the scene: Berlo had just squeaked past second-place boater Kevin Snider by 3 ounces, so 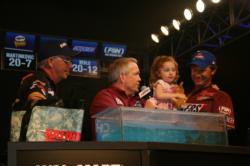 when cool-hand Carver walks his bag to the scale with a classic poker face, Berlo’s thinking his short time in the hot seat is about to end.

Carver pulls out three small fish that totaled 3 pounds. He needed only another pound, and Berlo looked like he needed a glass of cold water.

At this point, Carver suggested that Berlo’s 5-year-old daughter Alana join her dad on the stage. That’s when Carver drilled in the drama by joking with tournament host and FLW President and CEO Charlie Evans, who a day earlier stated that Carver would need more on the final day to win than he had just weighed.

“Remember what you told me yesterday?” Carver queried. “You said I’d need more than I caught yesterday. That’s what I went fishing for.” 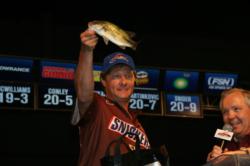 Well, it turned out that fishing and catching would not coincide this day. Carver reached in his bag, paused and asked: “Do you know what I have to say?”

Evans, Berlo and pretty much everyone in the Summit Arena held their breath until the cagey veteran pulled out an empty hand, which he extended to his competitor and said, “Congratulations!”

Alana seemed preoccupied with the confetti that suddenly filled the air, but someday she’ll hear this story and understand how Carver enhanced her daddy’s victory with one classy performance.

Hailing from Vienna, Va., Berlo caught a final-round limit of 4-11, which gave him a tournament total of 20-12 and earned a $100,000 top prize. He caught his fish on a 3/8-ounce root-beer/pumpkin-pepper jig with a Berkley craw trailer of the same color. Berlo helped design the jig for Hunter Creek Baits, so he had plenty of confidence in the bait.

“I really believe in this bait,” Berlo said. “I caught fish on it in practice, on day one of the tournament and day two of the tournament, so I knew I needed that bait in my hand on the last day, no matter what.”

Berlo fished pockets and coves in the midlake area, near the Route 70 Bridge. Targeting docks, willow grass lines and bluff banks, he ended up swimming the jig on day three. Pitching his jig deep under cover and working it out proved highly effective.

Snider swings up to second

Kevin Snider of Elizabethtown, Ky., caught a final-round limit weighing 6 pounds, 11 ounces and finished just 3 ounces out of first place with 20-9. He caught most of his fish on a 3/16-ounce 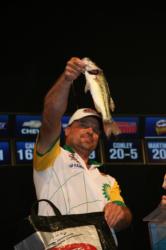 Snider caught a few fish out of brush piles, but fared best by targeting the drop-off edges of points in 14 to 22 feet of water.

“The key for me was fishing deep,” he said. “I didn’t fish shallow at all.”

Low weights and mostly small fish was the common story throughout the tournament field, but Snider managed to pull a 2 1/2-pound kicker on day three. He got off to a good start on day one with a limit weighing 9-15, but the wheels came off the wagon on day two when he caught just two fish for 3-15.

“I was surprised how the fish got lockjaw, because the first day I really stroked them good and caught multiple fish everywhere,” he said. “I thought for sure I was going to do well the second day, but that was my worst day. I lost a big one with eight minutes (left to fish). I was horsing him in because we had to go, and that ended up costing me the entire tournament.” 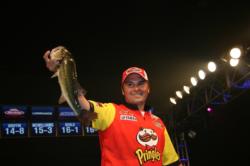 Chris Martinkovic of Liberty Township, Ohio, caught a limit, but he caught one of them so good that it cost him an 8-ounce penalty. Add half a pound to his 20-pound, 7-ounce total and he would have eclipsed Berlo by 3 ounces.

“One of my fish was deep-hooked, and he didn’t make it,” Martinkovic said. “That penalty cost me the tournament.”

Even with the penalty, his 6-11 was the heaviest sack of the final round. His day began with a kicker on a topwater. He also caught fish on shaky-head worms and Carolina rigs. All of his action came from docks.

It was a rough start for Greg Rikard, but nothing unfamiliar for the Leesville, S.C., boater: “I had a 3- 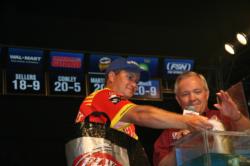 pound bass jump off my buzzbait first thing this morning. I’ve lost a big fish every day this week, so I’ve had some missed opportunities.”

His four-bass stringer included a kicker, but the fifth keeper eluded him. Rikard improved from sixth place on day two with a 20-6 total. 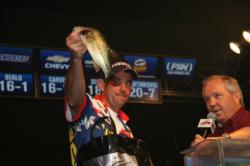 Michael Conley of Bainbridge, Ga., caught a limit weighing 6 pounds, 11 ounces to tally a three-day total of 20-5. Conley improved from the eighth-place spot on day two.

Rounding out the top 10 boaters at the BFL All-American event: