All-American champion lined it up 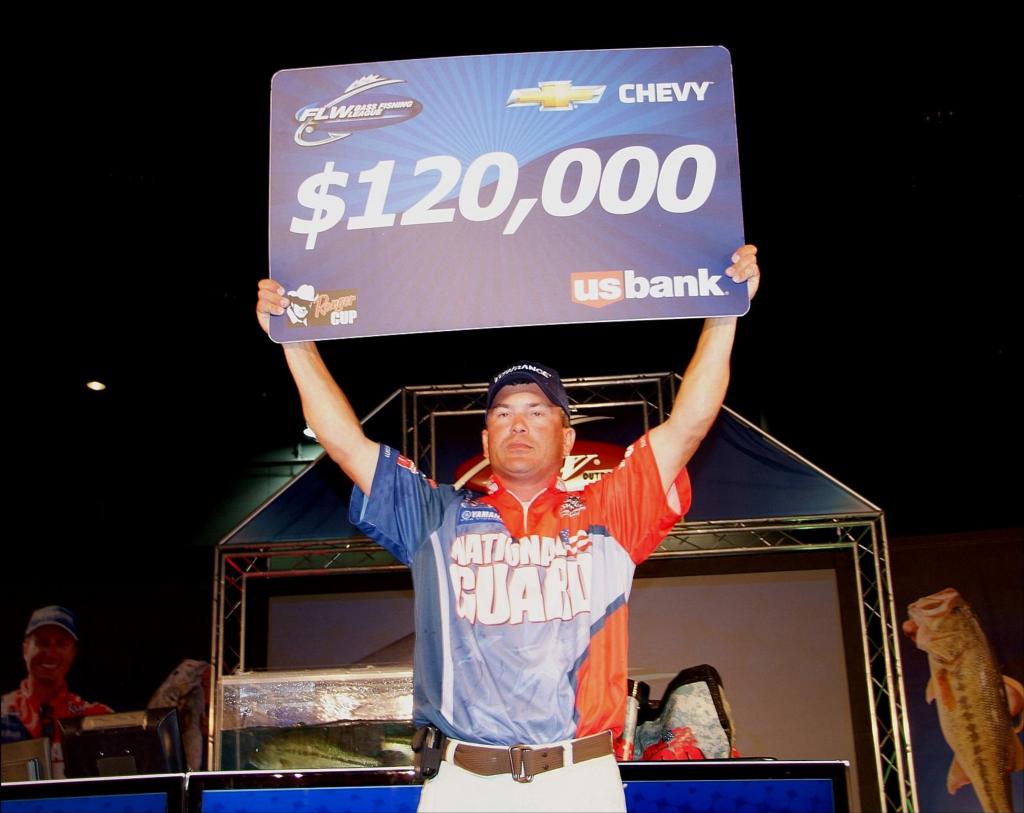 HOT SPRINGS, Ark. – Sometimes practice really does make perfect. Just ask boater Troy Morrow, who ran away with the 2010 All-American title with more than 8 pounds to spare by sticking to the successful patterns he found before the BFL championship began this week on DeGray Lake.

Morrow left his home in Toccoa, Ga., in time to allow himself seven practice days on central Arkansas’ DeGray Lake leading up to May 17, the start of the off-limits period ahead of the All-American. After just four and a half days, he had 92 waypoints plugged into his Lowrance GPS unit and enough confidence in both the shallow and deep patterns he had developed that he decided to go home.

“This lake fit me to a T,” he said. “Early in my practice, I could go down the shorelines and get 20 pounds easy – almost for the fun of it.”

Morrow said he loves fishing jigs, but figured by the time the tournament kicked off May 27, it would be a contest won deep. He quickly switched it up and started honing in on a pattern that he applies on his home water of Lake Hartwell, another fishery with blueback herring as a primary baitfish.

“I practiced ahead of what the fish were doing,” he said. “I fished out deeper to find a different pattern.” 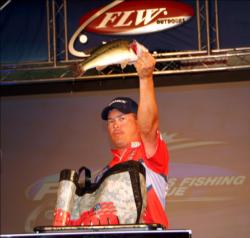 water in the midlake area of DeGray. That way he could catch them with a fluke-style topwater bait over the brush in the mornings, and then transition to deeper fishing with crankbaits (Spro Little John DD), which landed most of his kicker fish, or plastic worms (NetBait T-MAC).

“I like to fish jigs, but I could never get them to bite,” he said. “But I love to fish deep, so it all worked out.”

Morrow proved these methods Wednesday during the official practice day and went to work from there. He caught five-bass limits over the first two days of the tournament for 13 pounds, 12 ounces and then 16-6, and he finished up the event Saturday with four bass for 8-11, giving him a three-day total of 38-13, worth the first-place prize of $100,000 plus a $20,000 Ranger bonus.

Morrow – who said he works in construction, tree removal “or whatever it takes to get me to the next tournament” – doesn’t lack confidence, a trait that served him well at the 2010 All-American and his him looking ahead.

“Needless to say, I won’t be working for a while … I just happen to live 35 miles from Lake Lanier (site of the Aug. 5-8 Forrest Wood Cup, for which he qualified via his All-American win),” he said, revealing the widest smile he’d shown onstage all week. 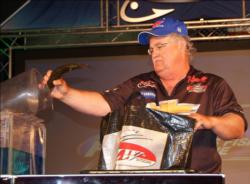 As the end of the weigh-in approached, the only boater left among the top 10 who had a chance of catching Morrow was veteran bass pro Tee Watkins of East Point, Ky. But after a second-day surge, he couldn’t repeat his success Saturday, weighing only three fish for 5-6, giving him a three-day total of 30-12 and a runner-up check for $20,000 plus a $10,000 Ranger bonus.

“I stayed shallow and managed to get a good bite some of the days,” he said, adding that he fell victim to the fickle nature of the bass he’d patterned today. “I had the fish to win it, and I just missed a few – especially that big one on day one.”

Watkins’ primary pattern was swimming a 3/8-ounce black/blue Pro Cast jig made by Cumberland Pro Lures with a black/blue Berkley Critter Chunk on points along a six-mile stretch in the midlake area. 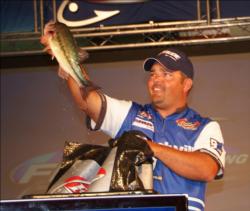 Keith Green of Arkadelphia, Ark., is a DeGray Lake veteran, and he used his local knowledge to put four bass in the boat today for 9-4, giving him a three-day total of 30 1/2 pounds worth $16,000. Like many anglers this week, Green had trouble keeping his bass buttoned.

“I did have the opportunity, but they rolled on my bait today,” said Green, who pushed his FLW Outdoors career earnings to over $180,000 today. “I was fishing a topwater most of the week, but that’s what happens – it’s fishing.” 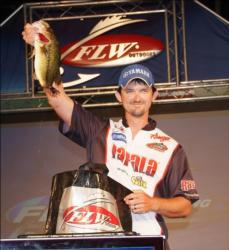 Another local favorite with a strong cheering section, boater Chris Darby of Mount Ida, Ark., add three bass to his tourney tally Saturday for a three-day total weight of 29-6 worth $14,000 plus $7,000 in Ranger Cup earnings.

Darby told a familiar tale: “I had two big ones pull off. I was fishing a (Carolina) rig, and the bite was so alive, they just came off.” (Seventh-place boater Brandon Palaniuk would later describe DeGray’s bass as a combination of Evel Knievel and Harry Houdini because “they are daring enough to bite anything, but somehow they all get loose magically.”)

Fifth place and $13,000 went to Jason Threadgill of Norwood, N.C., the only boater to manage a five-bass limit on the final day that bolstered his three-day weight of 29 pounds.

“I made a few bad decisions, but all in all is was a great week,” he said. “The first two days were kind 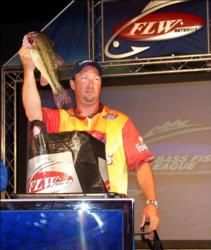 of stressful, but today I just went out and fished. I got five; I couldn’t ask for more.

“I had some deep fish (that he caught on brush piles), and when that bite died out, I’d go to the bank and flip bushes.”

Rounding out the top 10 boaters to finish the All-American presented by Chevy on DeGray Lake: