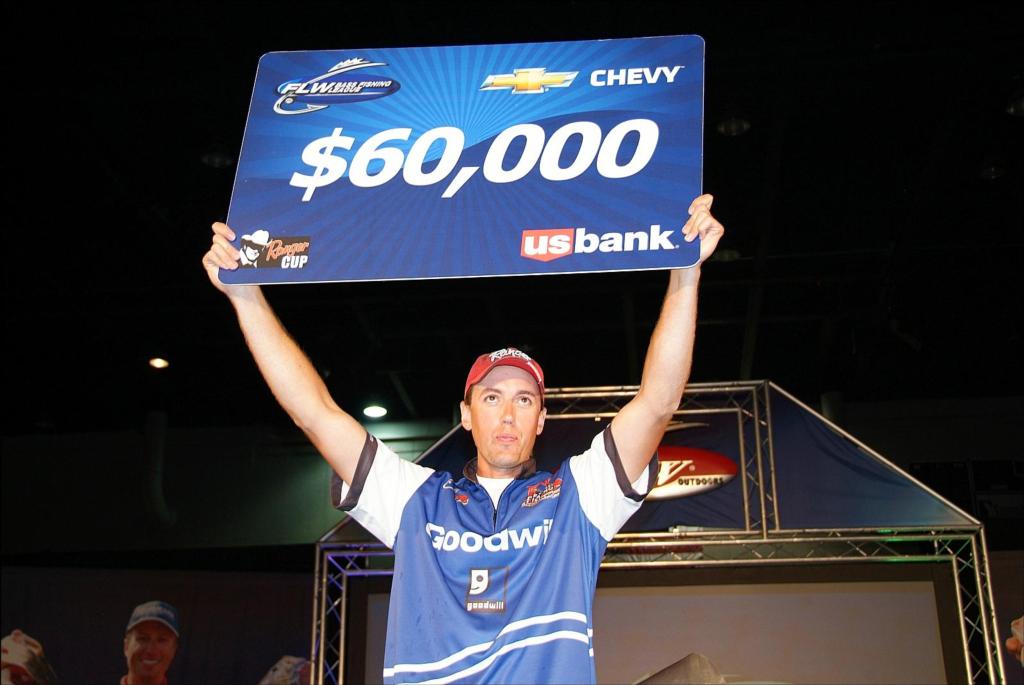 HOT SPRINGS, Ark. – Brett Rudy of Burlington, Iowa, jumped into the co-angler lead in the BFL All-American championship on day two, then got paired with bullet-proof Troy Morrow, the ultimate boater champion, on Saturday for a wild final day of fishing. The 25-year-old picked up two more today for a convincing championship win and a $50,000 cash prize plus a $10,000 Ranger bonus.

But it wasn’t nearly as easy as it sounds. Rudy caught his fish the first two days Carolina-rigging and was sure he’d do the same today – until he got on the water.

“I switched to crankbaits,” said Rudy, who works as a firefighter and paramedic. “(Morrow) was moving so fast, I couldn’t drag that Carolina rig. We were flying … we burned out the trolling-motor batteries, we were moving so fast.”

Despite the fast and furious pace of his final day, Rudy was able to settle into a crankbait groove, fishing a Bomber Fat Free Shad, a Norman DD 22 and a Bandit 700 Series lure, all in shad-imitating colors.

“I didn’t catch that big one until about 10 (this morning) on a deep-diving crankbait that I have never thrown before … but I’ve had for about 10 years,” he said. 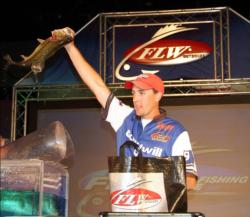 Rudy looked stunned when accepting his winner’s check onstage and hearing that his win has qualified him to fish the 2010 Forrest Wood Cup.

Though he said he thinks about trying to go pro, Rudy is in no rush. He said he’s “not at that level yet,” but allowed as how his job would allow for the time off if he ever decides to step to the front of the boat.

Rudy fished with Eric Guimond on day one for a weight of 3 pounds, 6 ounces, with Jay Keith on day two for 12 pounds and finally Morrow today for 5-14 more, giving him a three-day total weight of 21-4.

Co-angler Jeremy Rasnick of Point Lookout, Mo., climbed five slots to finish the tournament as runner-up with a three-day total weight of 18-7 worth $15,000 plus a $2,000 Ranger bonus. He sacked one of the few co-angler limits of the week today, but got drilled with 2 1/2 pounds’ worth of dead-fish penalties 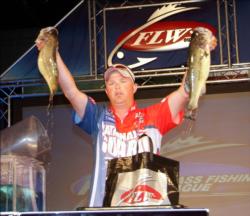 leaving his official daily tally at 8-12.

“We were fishing really deep water,” he said. “I was fortunate enough to fish with local favorite Chris Darby. We ended up practicing together (on the official practice day Wednesday), and I knew we were going to get along.”

Rasnick, a 27-year-old U.S. Army Corps of Engineers park ranger, said he caught his bass on a Carolina rig with a Brush Hog in watermelon color, mostly at depths of 25 to 35 feet. They fished offshore structure in the midlake area.

Rounding out the top 10 co-anglers finishing the BFL All-American presented by Chevy on DeGray Lake: