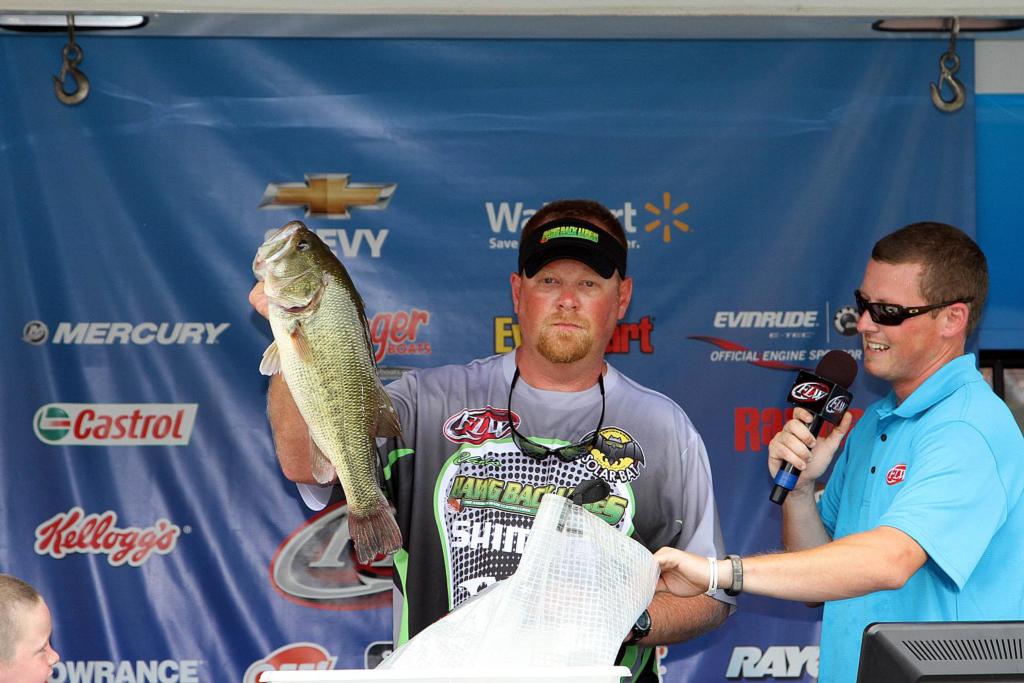 CHATTANOOGA, Tenn. – He exceeded his target weight, found a new spot that’ll play for the final round and held onto his lead. So, despite an overall tougher bite, things worked out okay for Indiana boater Chris Wilkinson in the Wal-Mart BFL All-American on Nickajack Lake.

Yesterday, Wilkinson took the top spot with a 20-pound, 10-ounce limit – the only bag to break 20 and thus far, the tournament’s heaviest catch. Wilkinson carried a 1-pound, 14-ounce lead into day two and expanded that margin to 2-5 by catching 18-15 and tallying a two-day total of 39-9.

“I had to work for them a little more today, but toward the end I found a spot that was loaded up pretty good,” he said. “I was shooting for around 15-16 pounds and I knew I had 17-18 so I backed off. I quit fishing about an hour early.”

On day one, Wilkinson threw a Paycheck Baits Repo Man topwater early and then flipped Hawgback 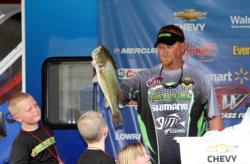 Day-one dawned with dark clouds looming across Nickajack and it wasn’t long until scattered storms dropped rain on much of the area. Cloud cover remained until midday, with mostly sunny skies prevailing for the day’s latter third. By contrast, today saw a bright sunrise and only thin, hazy clouds, so day two was much brighter. 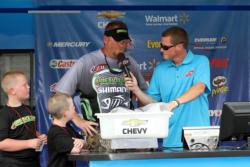 “I did not get a bite on topwater today,” Wilkinson said. “My situation today changed completely. I caught all my fish today flipping soft plastics and that was the only way I could get them to bite. I didn’t even get a little fish to come up and eat a topwater. The sun was the big thing. Unless you’re fishing matted grass, the sun’s not good for topwaters.”

On the other hand, Wilkinson noted that sunny conditions helped his flipping game. He basically mixed up the baits to maintain a fresh presentation but trusted his instinct on when to throw either one.

Wilkinson said he got his better bites later in the day. This, he surmises, was probably due to the fact that the high, sunny conditions locked the fish closer to cover. When that happens, it becomes easier to make targeted presentations.

“That made them easier to find,” Wilkinson said. 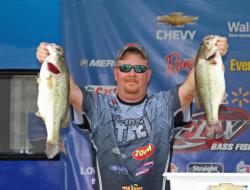 Essential to his success, Milner said, was a total commitment to the right spot. In doing so, he corrected a day-one mistake and the results were undeniable.

“I stayed at the spot I should have stayed at yesterday all day today,” he said. “Yesterday, I got (nervous) and ran around the lake some. Today, I ran to one spot and never started my motor until it was time to come in. I got fortunate today and caught a limit the first hour.”

Milner ran upriver and fished a 100-yard stretch in the Chickamauga dam tailrace. Milner was one of only a few boats that headed upriver at the morning takeoff, but this was a well-planned strategy.

“In practice, I found some schools of fish downriver, but that’s where everybody was fishing,” he said. “All the good spots were getting hit by too many people. I have a good current seam I’m fishing below the dam and I’m confident it will keep loading with fish.

“The fish that live there are strong, healthy fish. They’re thick from the tail up. They’re fighting that current all the time, so they (grow heavy).”

Milner caught his bass in 13-15 feet in areas with scattered rock. He fished a homemade football head with a Zoom Fat Albert Twin Tail and a Texas-rigged Zoom Brush Hog.

Bradley moves up to third 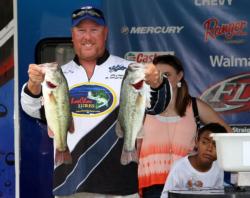 Local boater Corey Bradley, of McDonald, Tenn., demonstrated the benefit of local knowledge by essentially wrapping up his day before 8 a.m. Fishing about 30 minutes from the take-off site at Ross’ Landing, Bradley said that once he got setup on his spot, that action started immediately. By day’s end, he had caught a limit weighing 17-1 and raised his total to 35-2.

“I made 15 casts this morning, had 16 pounds and left,” Bradley said. “I had my weight five minutes after I got there. After that, I just looked around, checked out some other spots and looked for more fish (day three). I went back to my spot about an hour later for the (TV camera crew) and caught a 4-pounder and culled one more time.”

“I was stroking the jig really hard today because they were suspended about 4 feet off the bottom,” Bradley said. “They were hitting it pretty good today.”

Shawn Gordon gave up two spots from his second-place performance on day one, but the boater 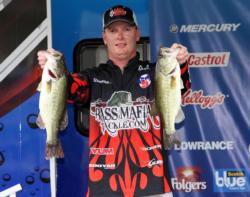 Returning to his day-one game plan, Gordon threw a Bomber Fat Free Shad crankbait to secure his limit with plans of upgrading later with a jig.

“It took me until 10 o’clock today to get a limit cranking and then I went and culled all of them out,” he said. “So tomorrow, I think I’ll go flipping all day and see if I can make up some ground.”

Gordon caught all of his better fish on laydowns. Flipping his baits on the upcurrent side and allowing them to naturally wash back under the cover was the most effective presentation. 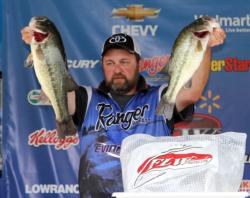 “I went to the areas where I caught my limits yesterday and they completely dried up; I didn’t even catch a fish off of them,” Williams said. “I went and ran new water the rest of the day and the first fish I caught was about 6 pounds. That was about 8:30 and then by about 9:45 I had a limit.

“After that I just ran new water. That’s the way river fishing is – you see something that looks good and you stop and fish it. The problem now is that the water is down so you’re limited on the banks that are good. Some of them have more water than others so you have to find those.”

Nick Angiulo, of Hainesport, N.J., faced a completely different scenario than what he experienced on 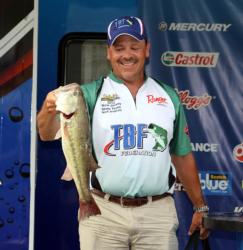 day one, but on the back of the boat, it’s all about adaptability. Taking this to heart, Angiulo shifted gears and sacked up an even 14 pounds that boosted his total to 25-13 and moved him up five spots to first place in the co-angler division.

“We fished 100-percent different than I did yesterday,” Angiulo said. “Yesterday, I was fishing a dropshot in shallow water and today I was basically dragging a Texas-rigged Zoom Baby Brush Hog with a heavy weight in deeper water.”

“This weight is very sensitive and it really helped me determine what was a rock and what was a bite,” he said. 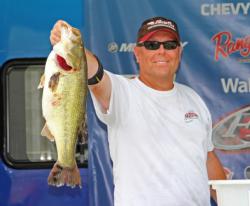