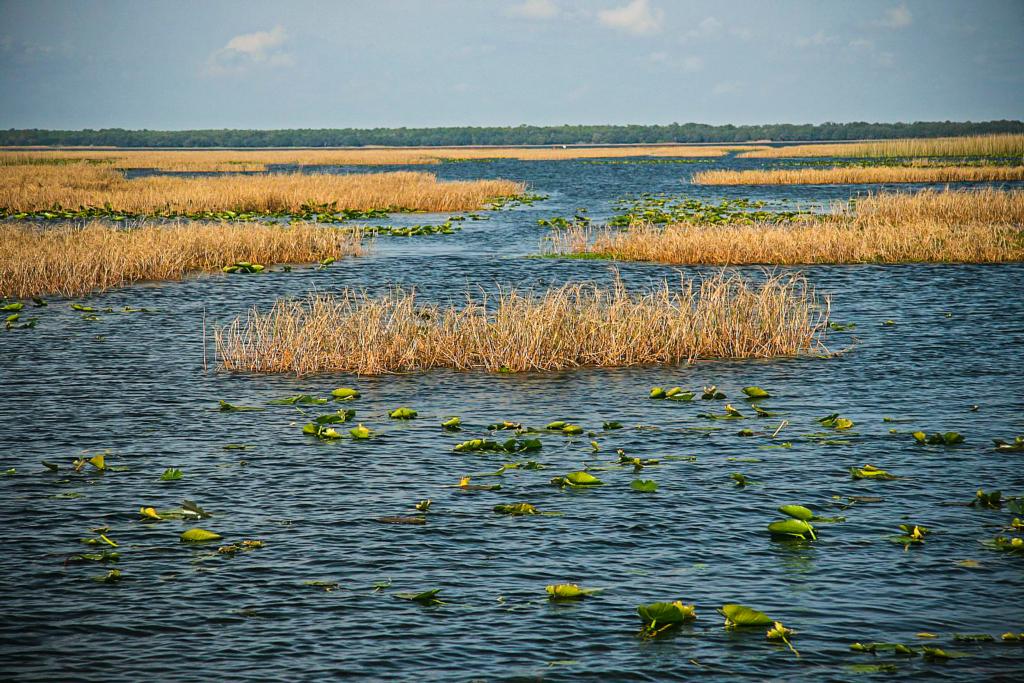 Poetic as it may sound, the death of water hyacinth literally breathed life into Robert Crosnoe’s efforts at the Walmart Bass Fishing League Regional on the St. Johns River Oct. 2-4. By targeting mats of dead hyacinth that were sprayed sometime between the cutoff period and the event’s official practice, the boater from Inverness, Fla., won the event with 47 pounds, 6 ounces.

For his efforts, Crosnoe won a Ranger Z518C with a 200-hp outboard and a brand-new Chevy 1500 Silverado pick-up.

Crosnoe found his bites in small patches of dead hyacinth that had blown into the knotted tangles of alligator vine common to the St. Johns. As he discovered, hundreds of crawfish and blue crabs were clinging to the undersides of these mats, so bass were drawn to the ample food source.

On day three, he also spent a few hours fishing a gator vine mat mixed with pennywort, which had a patch of live hyacinth on the tip of a point in the mat. Abundant bream cued him in on this spot, which yielded two final-day keepers.

Crosnoe caught his fish by pitching a Reaction Innovations Kinky Beaver in hematoma color on a 3/0 Gamakatsu superline hook with a 1 1/2-ounce tungsten weight. Crosnoe notes that a stout 7-foot, 8-inch rod, an 8:1 retrieve-ratio reel, and 65-pound-test braid were essential for separating bass from cover – as was snelling his hook.

“When the weight goes down on the eye of the hook, that always makes the hook point come straight up,” he says of the snell knot. “That point pokes out first, so you have a better chance of hooking the fish.”

Catching an 8-pounder in practice helped second-place finisher Wes Logan dial in on the bait and habitat that would lead him to a second-place finish with 46 pounds, 8 ounces. Hailing from Springville, Ala., Logan caught all of his on a Zoom Baby Brush Hog in watermelon red.

He fished his bait on a 7-foot, 6-inch Coosa Tackle Company rod with 65-pound-test PowerPro braid. Logan rigged his Baby Brush Hog on a 5/0 Trokar flipping hook, and he used a 3/8-ounce Strike King tungsten weight.

“I think that big hook made the difference,” Logan says. “The first day, I had my biggest bag of the tournament [24 pounds, 3 ounces], with a 9-14 and an 8-pounder. You have to have a big hook to penetrate the tough mouths of those big fish.”

In practice Logan found his fish on the backside of a Crescent Lake island lined with flooded cypress trees and laydowns. Although both held fish in practice, the laydowns with big knots of weeds blown into their branches proved most productive.

“On that first day I could almost call my shots,” Logan recalls. “In practice fish hit the bait after it had settled. But on the first day, the fish were biting more aggressively, and that continued through the event.

“Every fish I caught was on the drop,” he continues. “A lot of times, I’d see the fish flash before it hit.”

“Most of the early bites came right off the outside of the pads,” says Ragan, of North Miami Beach, Fla. “Burning them fast was important, and also I needed a touch of wind to make it perfect. I ran around quite a bit trying to find that perfect light ripple on the surface.”

If he went an hour with no swimbait bites, Ragan would shift gears and alternate between a 5 1/2-inch unweighted junebug Venom Lures Salty Sling worm on a 3/0 Trokar worm hook and a homemade 3/8-ounce black jig with half ofa black Zoom Magnum Trick Worm as a trailer.

“Again, I would look for the perfect light ripple on the surface, but I worked the jig on the outside of the pads in the eelgrass,” he says. “I got my best bites when I swam the jig over the grass, dropped it down in the grass and then bounced it over the top again. They hit mostly on top of the grass.”

Ragan says that when the jig bite tapered off, he’d work the Salty Sling slowly through the pads and drop it in the holes.