The grass is coming back strong at Rayburn as boats once again have to navigate trails through the matted hydrilla. Photo by Rob Newell.
October 24, 2014 • David A. Brown • Phoenix Bass Fishing League 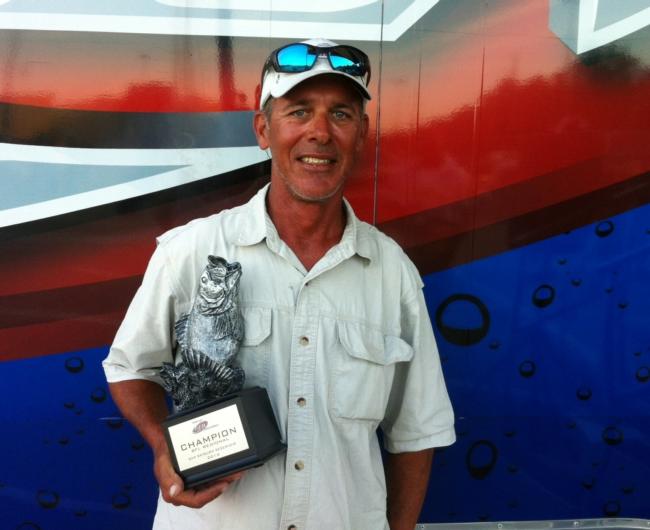 Everyone likes a lush, green lawn, but Buzz Gallo was particularly impressed with some of the grass he found on Sam Rayburn Reservoir – the site of his BFL Regional victory Oct. 16-18.

Topping boaters from the Arkie, Mississippi, Okie and Ozark divisions, the boater from Moselle, Miss., tallied a three-day total of 40 pounds, 9 ounces and won a Ranger Z518C with a 200-hp outboard and a Chevy 1500 Silverado.

In what was his first Rayburn event, Gallo says a windy practice limited his looking, but he found a sizeable grass line on the leeward side of a large island in the lake’s Attoyac River arm that would carry him through the event. Nearby timber and a channel swing complemented the cover, but Gallo says the key was finding rounded “domes” of compacted grass.

“The big ones seemed to like a tight mat of grass,” he explains. “And it had to be the darker green grass, not the lime-colored grass.”

Gallo caught his fish on a Zoom Fluke rigged on a 4/0 wide-gap hook, a 1/2-ounce SPRO Aruku Shad, a 1/2-ounce War Eagle spinnerbait and a Strike King Sexy Dawg topwater.

Short casts and burning retrieves through lanes and pockets amid the grass worked best with the spinnerbait and crankbait, while the Fluke handled close-range work. Gallo threw the topwater on day three when the wind finally died. The surface bite yielded several of his largest fish.

He may have come up short on total weight, but Jeff Johnston of Marion, Ark., clearly succeeded in his goal of consistency. En route to amassing his second-place total of 36 pounds, 7 ounces, Johnston was the only angler to catch a limit each day of the tournament.

Fishing Ayish Bayou about 15 miles north of Sam Rayburn Dam, Johnston targeted grass – but not just any grass. He had a plan, and it demanded discernment.

“My strategy was to fish very specific stuff,” Johnston says. “I was only fishing isolated hydrilla clumps near points with deeper water nearby. I wasn’t catching a lot of fish, but when I found an isolated clump in 2 to 4 feet of water, there was always a good fish on it. The shad were starting to move back into the creeks and bayous, and these grass clumps were textbook gathering points for the shad.”

Johnston started the tournament with a dozen spots and narrowed that down to three by the final day. The best spots reloaded several times a day, thanks to the proximity of a large grass mat.

Johnston began each day with a brown SPRO frog. When the topwater bite slowed, he switched to an alternating attack with a 1/2-ounce white ChatterBait with a white grub trailer and a clear-colored War Eagle spinnerbait. He started with a 1/4-ounce spinnerbait but switched to a 1/2-ouncer on day three to weed out smaller fish.

He knew the fish were getting ready to make their fall move, but third-place boater Matthew Salyer of Owasso, Okla., wasn’t convinced the change had occurred. That’s why he stayed out deeper and targeted grass-covered humps in 8 to 12 feet of water in the area of the 147 bridge.

“I had been watching the weather trends, and there had not been any really bad cold fronts, so I knew the fish would still be in more of a late-summer pattern than a fall pattern,” explains Salyer, who caught a three-day total of 29 pounds, 14 ounces.

“I was fishing spots with isolated clumps of hydrilla,” he continues. “These were transitional spots where they were trying to move on back to the creeks, but they hadn’t made it yet. I was targeting areas where they would stop and post up before heading into their fall spots.”

As Salyer explained, not every hump in the series he fished had grass. Locating the right spots took a lot of time idling and watching the Lowrance DownScan, but it was time well spent. No grass meant no fish.

Salyer caught his fish on Texas-rigged worms. He started with a 6 1/2-inch Strike King KVD Perfect Plastic Finesse Worm in green pumpkin and red bug then went to a 5-inch green pumpkin YUM Dinger for variety. Salyer used Strike King tungsten weights – 1/4 ounce for the tops of the humps and 3/8 for the deeper drop-offs.