A whole pile of updates from the water 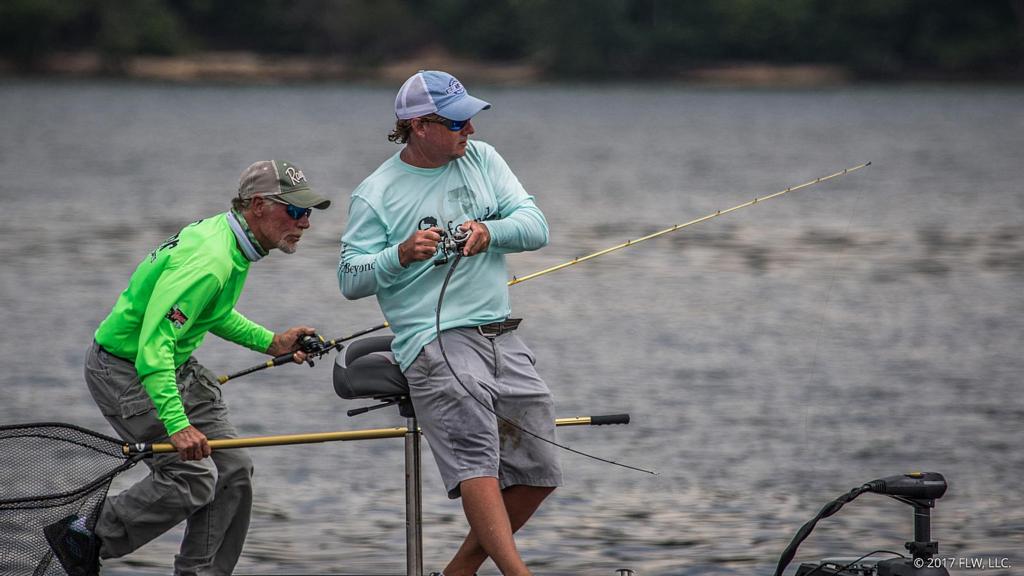 This story will be updated throughout the day with more from day two of the T-H Marine BFL All-American on Pickwick Lake.

It looks like Dylan Duncan has the honor of being the last update of the day. He’s having a tough one – after a good start on day one, Duncan has just one keeper in the boat late in the day. Fishing behind Duncan, co-angler Jimmy Terry has two keepers.

There’s a storm brewing to the south of the lake now, and though it doesn’t look too bad some of the anglers might get a bit wet on the ride back to the ramp. Other than that, it looks like another good day on Pickwick – weigh-in starts at 3:30 p.m. CT and should be a fun one! 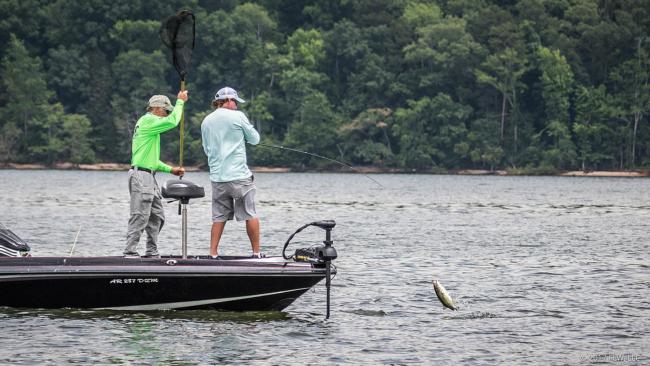 Brent Anderson says he’s got 17 pounds and is tossing back 3-pounders with nary a second glance. Despite some mechanical difficulties, his day has gone well – he says the deep bite is much better today than it was on day one.

Derrick Snavely is having a good day too, and reports about 14 pounds in the ‘well. Melvin Dunn says he has about 15 pounds as well, but his bite has been dead since the morning. Conrad Bolt has three keepers, and co-angler David Lansford has a limit. 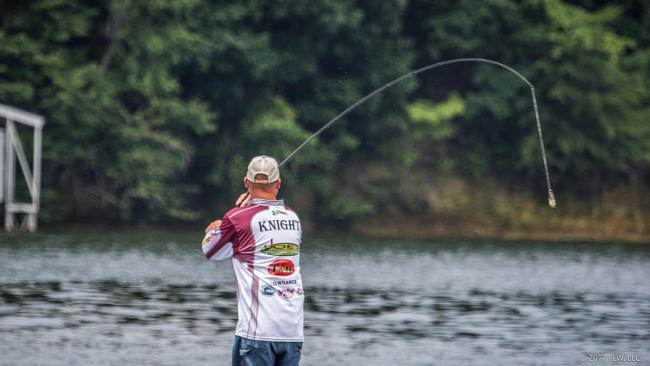 Jeff Knight looks to be on the way to another good bag – he’s got a 6-pounder, a 4-pounder and a trio of keepers in the boat now and is fishing well off the bank on the main river ledge. He’s likely done enough to make the cut, but one more good fish could put him in serious contention for the lead.

Brad Fowler is fishing above the Natchez Trace, and he’s got a solid limit for 15 pounds. Ryan Davidson has culled some more, and now reports over 15 pounds. Finally, Brad Leifermann had three keepers in the boat about an hour ago. 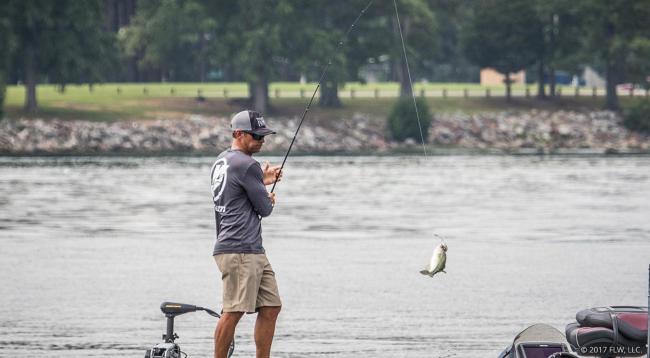 11:15 – A whole pile of updates
Mike Brueggen’s tough day has continued – last we heard he was still stuck on two fish for about 5 pounds. Justin Atkins has culled with a 3-pounder, and has about 15 pounds now. Ryan Davidson has caught a pile of fish and one good one today – he thinks he’s got about 13 pounds, but it sounds like he may have more.

Lloyd Pickett is doing decent again today – he says he’s got about 14 pounds. Mike Keyso had one small keeper when we found him, and Richard Phillips is in the same boat.

Robbie Crosnoe has the big bag of the day so far – he says his first spot was on fire and that he’s got about 19 pounds. Co-angler Justin Newell has two small ones. 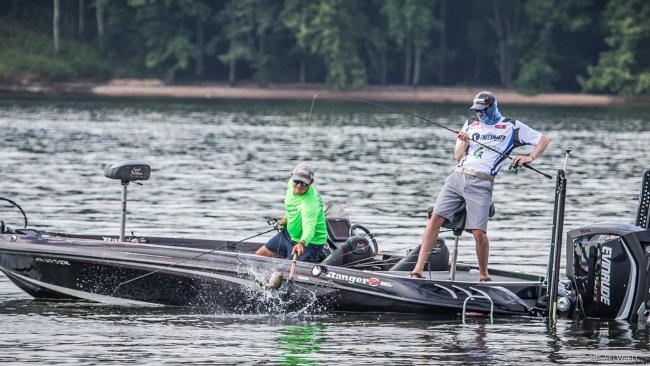 Justin Atkins is off to a solid start – so far he’s got four decent keepers and one 5-pounder in the boat. His co-angler, Greg Ravitsky, just finished out his limit with a decent keeper and looks to be on track to make day three.

Marshall Deakins is still cooking along – he’s stayed on basically the same spot all morning and just culled up past 15 pounds.

Dustin Huggins and co-angler Tim Gilliland each have one keeper. Otherwise, it’s been a bit of a slow morning on Pickwick, but the current is picking up now and the fishing should go hand in hand with that. 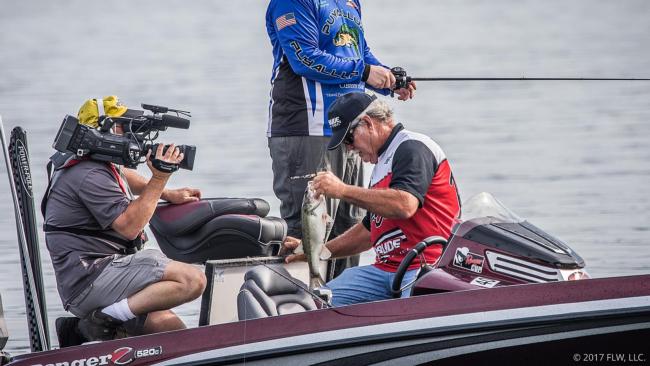 Marshall Deakins has started off well, and just made his first cull of the morning. We think he’s got about 14 pounds in the livewell. Down the lake, Mike Brueggen is on his fourth spot and has lost one keeper and boxed up a decent 2-pounder to start his day. Brent Anderson has three fish now for a total of about 7 pounds.

Elsewhere, Matt Stanley has started his morning with two small keepers. As for the weather, the clouds are clearing and the sun is beginning to blaze in earnest – it sure feels like it’s going to get hot.

Mike Brueggen is on to his second spot now, after landing one short on his first place. Co-angler Damon Duncan has one keeper, and lost another that looked to be a decent fish. Brandon Gray is off to a good start with a 3-pounder, but he also lost one just like it. Brent Anderson has two in the ‘well, but they’re both quite small.

It’s fairly cloudy out now, and there are signs of a big mayfly hatch that must have happened overnight. 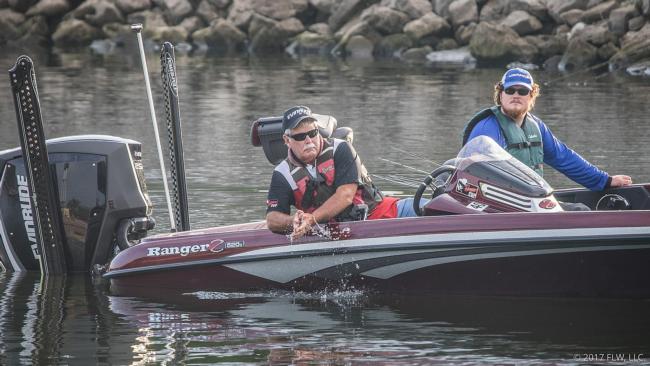 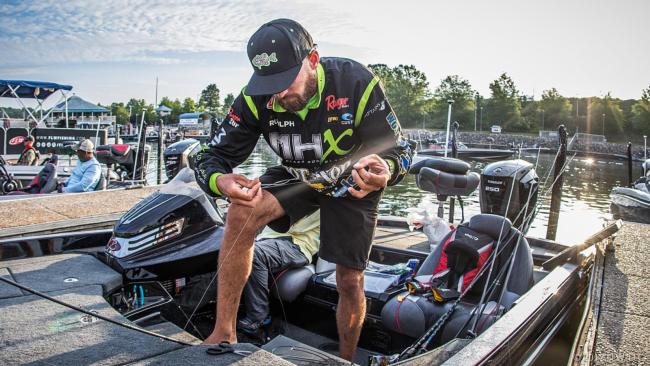 Day two of the T-H Marine BFL All-American looks to be another beauty. It’s supposed to be just a little bit hotter and a little bit breezier today, but otherwise it’s another gem of a day for fishing. Marshall Deakins sacked up 24-6 on day one for the early lead on the boater side and he says he has more in the tank. Nevertheless, Pickwick is a lake with big comeback potential that can also be tough on the leaders. Only the top 10 boaters and co-anglers will move on to tomorrow’s final day, and the weights are tight enough throughout that taking a homerun-cut isn’t a bad move.

Most of the action on day one went down on the ledges, and we expect that to continue today. That said, the competitors have been plying a wide range of ledges so far this week, from main-river breaks to shallower bars. It’s not for sure which type of structure is the best, and with the offshore bite a little more fragmented than usual it’s not surprising that a variety of strategies are paying off.

We’ll do our best to keep tabs on the leaders today, but we’ll be doing some roaming as well. So stay tuned, it’s cut day at the All-American.