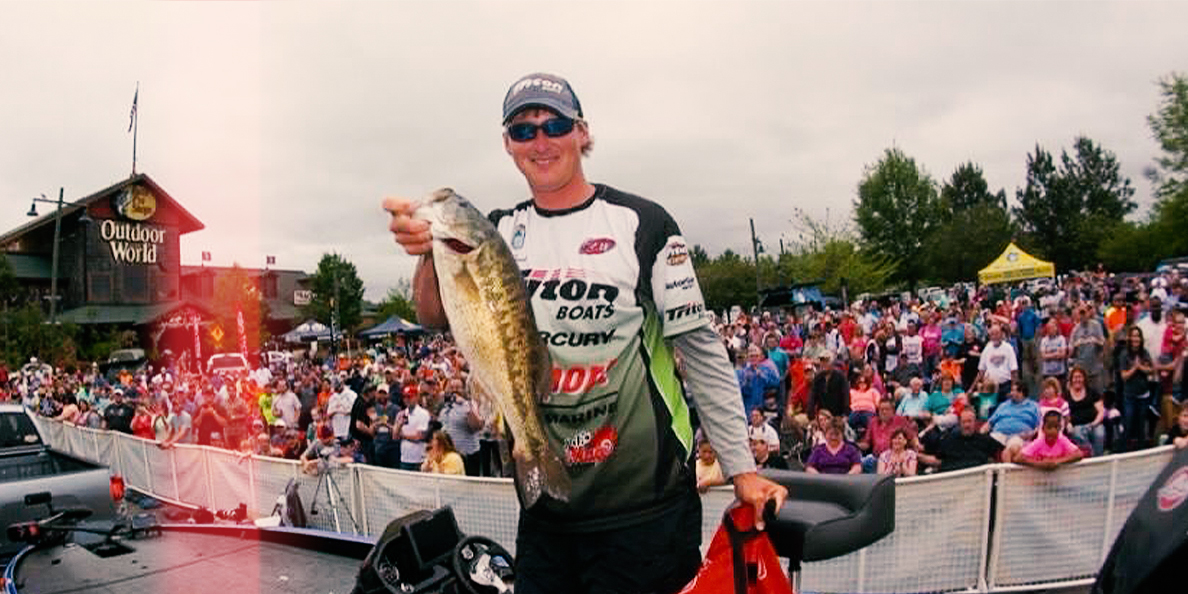 At 22, Dustin Connell seemingly had it all: a college graduate fishing as a full-time local angler and on the path to potentially becoming a pro angler.

“I’d been fishing as a full-time angler for an entire year, giving my all to my dream, but it just wasn’t enough,” Connell reminisced. “At 22 years old, my whole life was planned out and I was on the path to become a professional angler, but suddenly, I was broke. Broker than broke. I honestly don’t know how much more destitute you could be.”

Graduating in 2012 with a marketing degree from the University of Alabama, Connell had meticulously assembled a plan that would prepare him for the life and business aspect of being a professional angler. He started the process of fishing full-time and came out of the 2013 season doing well.

“Fishing was my job, but I was coming home from tournaments with basically no money,” Connell said. “At a certain point, I could no longer pay entry fees. Without entry fees there were no more tournaments to fish and no opportunities to even make a living. It was a difficult time.”

“When fishing is your only paycheck and you aren’t being paid, things get dire really quick, especially when you’re first starting out,” Connell said. “I eventually got to the point that my brother had to step in to help me pay my bills, which is when I knew I had to make a change.”

But the harder Connell tried to turn things around, the worse his situation became.

“I was in a bad place,” Connell admitted. “I was out looking for work, had a college degree and still couldn’t find a job. A close family friend, Danny Stevens, knew I needed some help, so he offered me a job in construction and I knew I needed to take it.”

“During that time, I began to lose hope in myself and in my ability to push past this point,” he said. “I worried I might have to throw in the towel on following my heart and pursuing my dream.

“I was really down in the dumps. Don’t get me wrong, I was thankful for the job and there’s nothing wrong with working in construction, but I had planned my whole life and my college degree around fishing professionally. Yet here I was out on a job site in a hard hat every day. It’s crazy how things change.”

The Road to Being a Pro

Connell’s love and drive for fishing began at a very young age. He watched and learned from his older brother James and followed him to ponds and lakes to fish every chance he could.

“I loved fishing in general, but bass fishing was always my favorite,” he said. “My mom used to take me fishing at Lay Lake in Alabama, where I’d launch our canoe on the side of the bank and fish for hours while she read a book.”

After fun-fishing for many years, he fished his first bass tournament with his brother when he was only 12 years old.

“We ended up in second place and he handed me $100. At 12 years old, that is a lot of money. It’s still a lot of money to me today,” Connell laughed. “But that wasn’t the only thing that got my attention. The thrill of the hunt, the competition, the paycheck – every part of that first event got me hooked on tournament fishing.”

Connell fished tournaments with his brother for several years and had high hopes and a dream of one day fishing professionally; but that proved to be a difficult task without access to a boat.

“I got a job when I turned 15,” Connell recalled. “My mom drove me to the metal fabrication shop in Clanton, Alabama where I worked making $7 an hour. My parents gave my brother and me everything they could, but we had to work for the things we wanted, especially ‘luxury’ items like a boat.

“Most kids can’t wait until they’re 16 to get their hands on the wheel of a car or truck and have something to drive around with their friends, but not me – I wanted a boat.”

Connell saved his money in anticipation of buying his “luxury item” and drove his mom’s 1995 F-150 as a loaner truck.

“At 16 years old, I bought a little 16-foot boat from my brother for $4,000 in credit, which I paid off with tournament winnings,” said Connell. “It wasn’t anything fancy, but it certainly got me out on the water.”

Connell fished tournaments for the next several years while going to school and playing baseball, eventually graduating from Chilton County High School in 2008. He had a couple of opportunities to play college baseball but instead chose to continue pursuing his dream. Connell studied marketing at the University of Alabama, a degree program to help him work with sponsors as a pro angler.

Then a few short years after graduating, he found himself working long, hard hours on a construction site to pay the bills instead of tournament fishing. Many close to Connell believed his professional fishing career had ended. He would have to give up fishing for this “real job.”

“But I never completely lost hope. I always kept the faith that it would happen,” Connell said. “Eventually, if I just kept my head down and kept fighting for it, I knew that I would make it.”

And fight he did. After saving some money, Connell quit the construction job in 2015 to fully pursue his passion once again.

“People thought I was being ridiculous,” Connell said. “Everyone told me I was crazy.”

“People thought I was being ridiculous,” Connell said. “Everyone told me I was crazy. I just knew if I could get my feet back under me, I could make it. I pressed the reset button and started fishing local tournaments again and practicing as much as I could.”

With his renewed determination, Connell set out on his boat and worked three times harder than he had before his financial setback.

“I’d experienced what it was like not doing what I love every single day and I didn’t want to ever relive that again,” Connell said. “Fishermen often have high hopes and expectations about being a pro angler, but somewhere along the road they hit some bumps and never take the jump to follow their heart. I didn’t want to be stuck in that place on my journey.”

Connell walked away from his first tournament back with a $20,000 check in his pocket, quickly followed by a $50,000 payout at his third tournament and several other big tournament wins throughout 2015.

“That was a huge confidence booster and definitely got me back on my feet to financially fund my dream,” Connell said. “I finally had enough money to enter the (B.A.S.S.) Opens and then qualified to fish as a professional. I won $100,000 during my first year on tour and things have just taken off from there.”

His success continued into 2017, when he claimed an Elite Series win (and $100,000 paycheck) and was named B.A.S.S. Rookie of the Year. He maintained that momentum through 2018, when he earned an invitation to join MLF on the Bass Pro Tour. Connell finished the 2019 Bass Pro Tour season in 8th place and sits in 16th place after the first three Stages of the 2020 season.

Now 30 years old, sponsored by Favorite Fishing and driving around in his own 21-foot Triton boat, Connell has earned over $400,000 in career winnings and is officially living his dream with his wife, Victoria.

Connell believes tough times set you up for opportunity. He would not have learned to truly appreciate the good times if he had not gone through a darker time.

“I honestly think God has a plan and if you stick to it, go with your gut and never give up, you can do anything you set your mind to,” encouraged Connell. “I’m now fishing professionally, living my dream and I’m still striving to be better every day.”

Especially during this time of economic crisis as a result of the coronavirus pandemic, Connell feels for those who find themselves at a low point financially. Those who have lost jobs and find themselves unable to follow their dreams, perhaps believing they can’t overcome this. But he offers his story because he believes that with effort and determination, anything is possible.

“I’m grateful for that difficult time in my life and what the struggle taught me,” said Connell. “Not only did it make me a better fisherman, but it made me work much harder and I try to never take anything for granted. I could have become hopeless and given up, but I believe there’s always light at the end of the tunnel, and I refused to quit until I found it.”