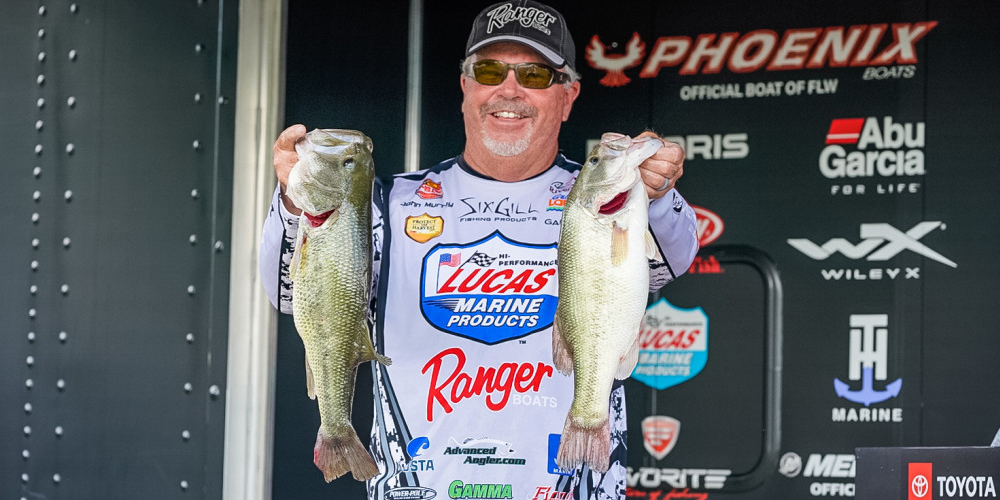 John Murray moved to the lead on Day 2 of the Toyota Series Central Division tournament on Pickwick Lake. Photo by Jacob Fine

FLORENCE, Ala. – When West Coast native John Murray made the decision in 2015 to pull up roots and move to East Tennessee from Arizona, one of his primary goals was “to really learn the TVA lakes.” After five years of roaming Watts Bar Reservoir out of his new home in Spring City, Tennessee, it looks like Murray has reached his goal.

Murray weighed in 22 pounds, 10 ounces Friday on Day 2 of the Toyota Series Central Division tournament on Pickwick Lake in Florence, Alabama, the heaviest five-fish limit of the day. Murray’s two-day total of 38-14 puts him in first place heading into today’s championship, just 1 ounce ahead of fellow MLF pro Jacob Wheeler (20-11 on Day 2 for 38-13 total).

“I’m just so much more comfortable on the Tennessee River now than I was five years ago,” Murray admitted after Friday’s weigh-in. “When you’re not on the TVA lakes, or even around them a lot, they can be pretty overwhelming. They’re big and flat, and they have these big ups and downs that are really hard to get used to if you’re not fishing them a lot.”

Murray started Friday morning with a trio of 5-pounders, and had 20 pounds in his live well 30 minutes into the day; he leaned heavily on a big jig and worm that he fished on bars in the 7- to 10-foot depth range. He capped off his day with one more big fish in the final hour to cull up 2 more pounds.

The Mercury pro finished Day 1 in 14th place with 16-4, but had been around the right fish all day long: his co-angler that day caught over 15 pounds.

“When you put some time in on the Tennessee River, you realize that you have to find groups – you can’t just go down a bank, thinking you’ll catch five good ones every day,” Murray said. “And you can’t go out in that 25- to 30-foot zone like you can on the West Coast. It’s that 5- to 20-foot zone where everything is on these lakes, and it’s not a zone that I’ve really liked to fish in the past. I’ve just never been very consistent in those middle depths, and you have to learn those depths here.”

Today’s 10-angler championship should be a battle: eight of the final 10 are within 3 1/2 pounds of each other, and Pickwick’s largemouth are grouping up more by the hour.

“The fishing here is a little behind, and I knew that from fishing on Watts Bar,” Murray admitted. “It really helped me, knowing what was happening on this chain. I came in here with a good idea of what stage these fish would be in.”

The final 10 anglers take off from McCarland Park in Florence at 6 a.m. CT. Weigh-in begins at 2 p.m. CT. Follow the action at www.flwfishing.com