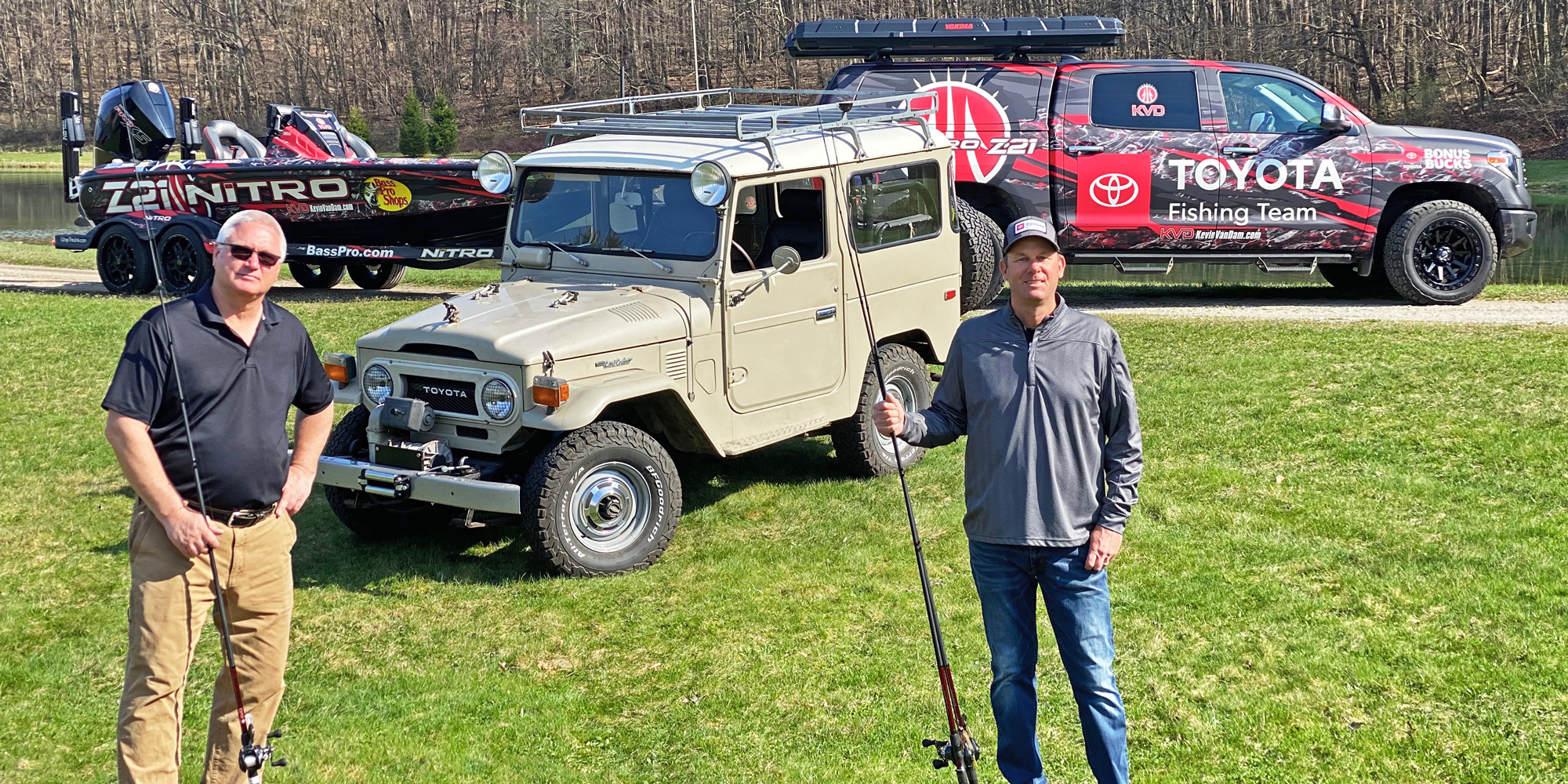 Kevin VanDam and his uncle, Henry Kalkman, stand with their beloved Toyotas. Photo by Alan McGuckin

Kevin VanDam is not only the most accomplished professional bass angler in history, but he’s also intensely adamant that his Toyota Tundra is the safest, most powerful truck he’s ever towed a boat with. In fact, he swears its oversized brakes helped save his life when chaos occurred in front of him while towing through a Chattanooga, Tennessee construction zone a few years ago.

But when he’s not pulling his 21-foot Nitro all over America, and it’s time to chill out with family and grab a pizza from Fricano’s in his beloved hometown of Kalamazoo, KVD usually convinces his neighbor and uncle by marriage, Henry Kalkman, to take the Land Cruiser.

Not just any Land Cruiser – an iconic 1975 FJ40 with less than 30,000 miles on it that Kalkman’s wife swears gets more looks amid a short hop around town than if they were driving a high-end muscle car.

VanDam certainly agrees with her.

“I just think it’s super cool,” VanDam grins. “I know its history, and there’s a nostalgia that surrounds it. Heck, I couldn’t wait to drive it last night to go pick up pizza.”

Born during WWII, Land Cruisers are actually Toyota’s longest-running series of vehicles. By the 1950s, both American and Japanese soldiers drove Land Cruisers in the Korean War. And since mass production of the iconic vehicle began, more than 5,000,000 have been manufactured and driven around the world. There’s even a Land Cruiser museum in Salt Lake City.

“My FJ40 is just a raw powerful vehicle that’s much the opposite of the creature comforts and technology in Kevin’s Tundra, but I think the rawness is also what he gets a kick out of,” says Kalkman, who owns a successful injection-mold-making facility that provides molds for the auto and medical industry, and escapes to Key West for an annual fishing trip with legendary guide RT Trosset.

Since taking ownership of the FJ40 two years ago, Kalkman has done little to alter its appearance of 45 years ago. In fact, he even added to its rugged authentic looks by adding an original bumper and steel wheel rims.

“I’ve seen old Land Cruisers just like it on TV in African safaris. And honestly, the fact it’s a 4-speed manual stick shift reminds me of the very first truck I drove as a teenager, so it’s definitely kind of nostalgic,” reflects VanDam.

He’s right, because of their reliability, Land Cruisers are hugely popular around the world including the vastly remote Outback of Australia, Africa, and wherever global adventure takes place – including trips to an Italian eatery in Kalamazoo, to pick up pizza for the people pro bass fishing’s most decorated angler loves most.