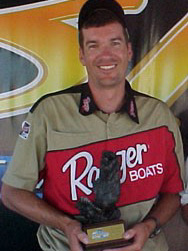 Kettelkamp, who also earned a $1,000 bonus from Ranger Boats as the highest finishing participant in the Ranger Cup incentive program, edged out Ronald Hill of Portville, N.Y., by 1 pound, 4 ounces in the one-day event that set out from French Creek Marina. Hill finished with a five-bass catch weighing 19 pounds, 2 ounces to win $2,690. Kettelkamp caught his limit using a combination of jigs and jerkbaits.

Bud Schosger of Painted Post, N.Y., won the boater Big Bass Award and collected $855 with a 5-pound, 13-ounce bass that he caught on a green worm.

Fred Whittier of Addison, N.Y., won the co-angler Big Bass Award of $425 with a 4-pound, 13-ounce bass that he caught on a grape-colored worm.

The Wal-Mart BFL will visit Lake Cayuga Aug. 25 for the fourth of five events in the Northeast Division. The boater with the most points after the division’s season finale, a two-day Super Tournament Sept. 22-23 on Lake Champlain, will be declared the Divisional Points Champion and awarded $1,000. The co-angler amassing the most points by the end of the season will receive $500.

The top 30 boaters and top 30 co-anglers in the Northeast Division will advance to regional competition Oct. 9-13 on Chautauqua Lake near Jamestown, N.Y., where they will go up against top competitors from the Buckeye, Piedmont and Michigan divisions for a shot at qualifying for the $250,000 All-American. The top two boaters and co-anglers may also qualify for the Ranger M1 tournament in Mobile, Ala., Feb. 27-March 2, 2002, where they can win up to $1 million in the world’s richest freshwater tournament.