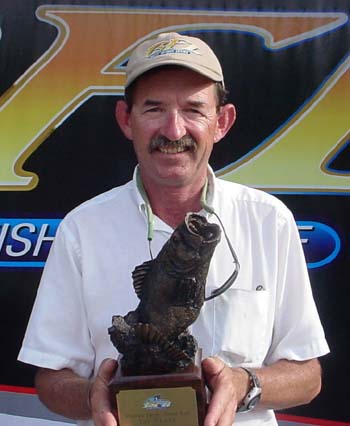 After qualifying for the final round of the two-day Super Tournament in 16th place with an opening-day catch of five bass weighing 10 pounds, 2 ounces, Ring out-fished runner-up Wayne Jennings of Prince George, Va., by 9 ounces to take the win. Ring caught his limit on day two using a worm.

Jennings qualified for the final round in 28th place with three bass weighing 9 pounds and finished up with a five-bass catch weighing 15 pounds, 4 ounces to win $3,823.

Kyle Hoffman of Harpers Ferry, W.Va., took boater big-bass honors and $1,420 for a 5-pound, 10-ounce bass he caught on a spinner bait. Bo Grosvenor of Goode, Va., earned a $500 bonus as the highest-finishing participant in the Ranger Cup incentive program.

David Ludwig of New Castle, Del., and Vandyke tied for the co-angler big-bass award. Each took home $355 for a 3-pound, 15-ounce bass.

The top 30 boaters and top 30 co-anglers in the Shenandoah Division will advance to regional competition presented by BC Powder Oct. 29-Nov. 2 on Wheeler Lake near Rogersville, Ala., where they will go up against top competitors from the Bulldog, LBL and Music City divisions for a shot at qualifying for the BFL All-American, one of the most lucrative postseason tournaments in competitive angling.