Newberry No. 1 boater at BFL Super Tournament on Sam Rayburn 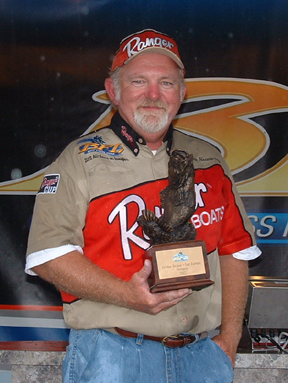 Newberry caught five bass Saturday weighing 12 pounds, 14 ounces to finish 15th on day one and followed that up Sunday with another five bass weighing 20 pounds, 9 ounces to earn the win. As the highest-finishing participant in the Ranger Cup incentive program, Newberry also claimed a $1,000 bonus from Ranger Boats, and he earned another $1,000 from Garmin for using a fixed-mount Garmin Fishfinder or combination GPS/sounder.

Clint Bridges of Round Rock led 158 Co-angler Division competitors on day two to claim $4,102 as the Super Tournament co-angler winner. He caught four bass Saturday weighing 13 pounds, 15 ounces to finish second and followed that up Sunday with another five bass weighing 14 pounds, 14 ounces to earn the win. Bridges also took co-angler big-bass honors and $790 with a 7-pound, 13-ounce bass.

The top 30 boaters and top 30 co-anglers in the Cowboy Division will advance to regional competition Oct. 21-25 on the Red River near Natchitoches, La., where they will go up against top competitors from the Arkie, Bama and Gulf Coast divisions for a shot at qualifying for the BFL All-American, one of the most lucrative postseason tournaments in competitive angling.