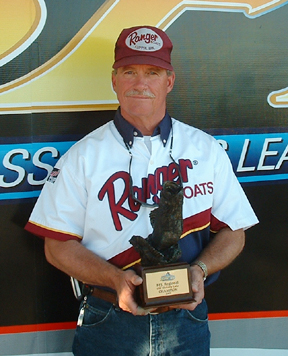 GALLATIN, Tenn. – Darryl Stewart of Slocomb, Ala., bested 118 Boater Division competitors this weekend at the Wal-Mart Bass Fishing League Regional on Old Hickory Lake to win a new Chevy truck and an Evinrude- or Yamaha-powered Ranger 519VS Comanche bass boat. The postseason victory also earned him a slot in the 2004 Wal-Mart Bass Fishing League All-American, where he will compete for a top boater award of $100,000 cash.

Stewart advanced to the regional by finishing the regular season ranked 30th in BFL Bulldog Division points standings. The top 30 boaters and co-anglers in the Bulldog Division competed against the top 30 Carolina, Hoosier and Illini division anglers for one of six slots in next year’s All-American. They will join the top six from five other regionals plus the Chevy Trucks Wild Card for an All-American field of 42 boaters and 42 co-anglers. The All-American, scheduled for April 14-17 on Lake Hamilton near Hot Springs, Ark., remains one of the most prestigious championship events in all of bass fishing.

Stewart caught two bass Thursday weighing 4 pounds, 14 ounces to finish 29th, and he followed that up Friday with 11 pounds, 3 ounces to sit in the No. 5 spot after day two’s competition with a two-day total of 16 pounds, 1 ounce. The top six finishers after day two competed a third day for position and prize money based on their total three-day weight, and Stewart led the field with a three-day total of 27 pounds, 9 ounces. All six automatically earned a berth to the All-American.

Stewart also earned a $1,000 bonus from Ranger Boats as the highest-finishing participant in the Ranger Cup incentive program.

Ray Arning Jr. of Walnut Hill, Ill., won an Evinrude- or Yamaha-powered Ranger boat as the Co-angler Division winner thanks to his three-day total of 17 pounds, 5 ounces. Arning caught two bass weighing 6 pounds, 8 ounces on day one to finish first, and he finished third after day two thanks to another 4 pounds, 2 ounces that set his two-day total at 10 pounds, 10 ounces. Arning will compete for a top co-angler award of $50,000 at the 2004 All-American.

Nationwide, the BFL is divided into 24 divisions – each featuring four one-day qualifying tournaments and a two-day Super Tournament. Under the BFL’s boater and co-angler format, boaters supply the boats, fish from the front deck and control boat movement throughout the competition. Co-anglers fish from the back deck and are competing against other co-anglers. Two hundred points are awarded to tournament winners, 199 points are presented for second, and so on except for the Super Tournament, where the winners earn 300 points, 299 points are given for second place, and so on. These points determine angler standings.