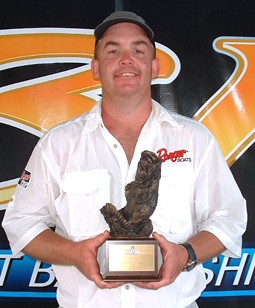 TICONDEROGA, N.Y. – Boater James Fleming of Lockport earned $5,011 Saturday as winner of the Wal-Mart Bass Fishing League Northeast Division event on Lake Champlain. The tournament was the second of five regular-season Northeast Division events and featured 199 boaters vying for the win, which earned Fleming 200 points in the Boater Division.

Fleming’s winning catch of five bass weighed 21 pounds, 2 ounces, and he caught them on a flipping tube along an outside weed edge. He also earned a $1,000 bonus from Ranger Boats as the highest-finishing participant in the Ranger Cup incentive program. He brought to the scales a 6-pound, 2-ounce bass that earned Boater Division big-bass honors; he claimed $995 for the big bass.

Donald Fontaine of Upper Marlboro, Md., bested 199 Co-angler Division competitors to earn $2,505 as the co-angler winner, thanks to five bass weighing 17 pounds, 12 ounces that he caught on a plastic in the grass.

Randy Izer of Hadley, Mass., earned $498 as the co-angler big-bass award winner with a 5-pound, 7-ounce bass he caught on a Scum Frog on braided line around weeds and milfoil.