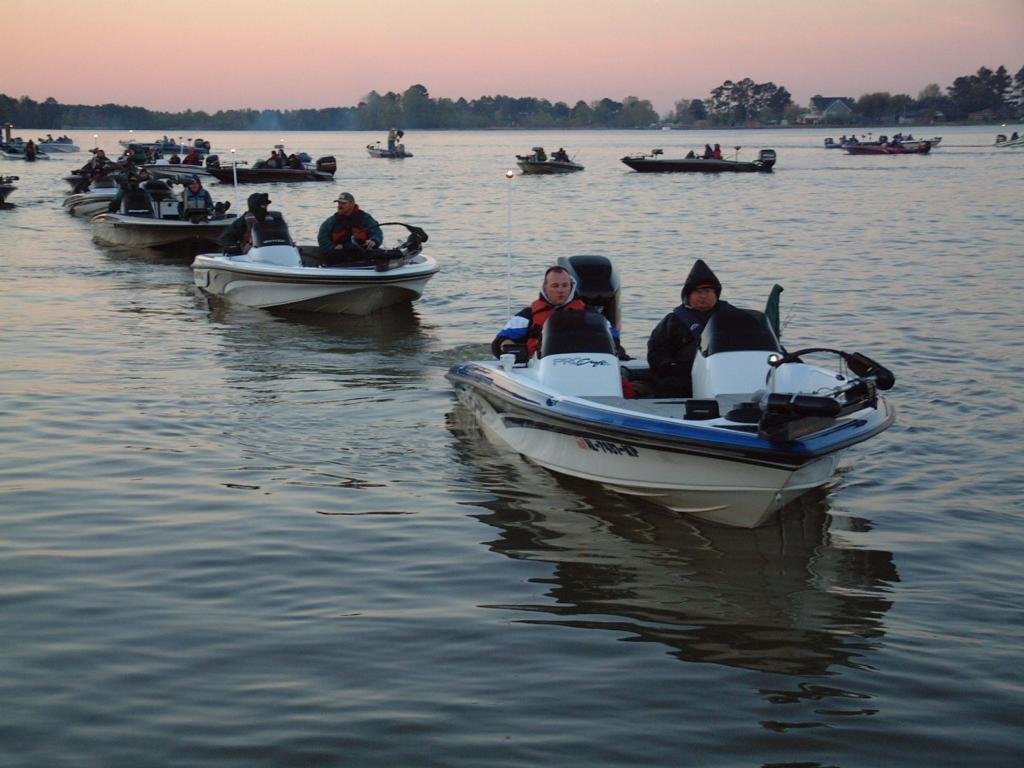 The lineup at the start dock commences for takeoff on day one of competition at Lake Santee Cooper. Photo by Jeff Schroeder.
February 10, 2005 • MLF • Press Releases

MANNING, S.C. – The $6.24 million EverStart Series is headed to the Santee Cooper lakes March 2-5 for the second event of the Southeast Division.

Famous for big weights, Santee Cooper may be at its peak when the event starts. “If we have normal weather between now and then, the water will probably warm up to the high-50s or low-60s, which is normal for that time of year,” said pro Micah Bennett of Summerville, S.C., who finished 18th at the EverStart Series event on Santee Cooper last year. “If temps are around 60, there will certainly be quite a few 20-pound sacks caught. If it’s a little warmer than that, the fish will be on the beds like last year. But it looks good right now. The water is in the mid-40s and the lake is rising.

“The fish will probably be very shallow – 4 feet or less. Most anglers will probably flip stumps and cypress trees with jigs and lizards. It could take 37 pounds to win.”

The winning pro, based on a full field, earns an Evinrude- or Yamaha-powered Ranger 519 VX equipped with Garmin electronics, a Minn Kota trolling motor and EverStart batteries plus $10,000 cash. If the winner is the original owner of a Ranger boat that is used during the tournament, the winner also receives a $10,000 bonus from Ranger for a top pro award of $60,000. If the winning pro is a Ranger Cup participant, Ranger will award another $3,000 cash (or $1,500 to the highest-finishing Ranger Cup participant if not the winner), and Yamaha will match 50 percent of Ranger Cup winnings if the angler’s boat is powered by a Yamaha outboard. Garmin will award the winning pro $1,000 if he uses only Garmin electronics and at least one unit is a qualifying unit, thus boosting potential winnings for the top pro to $65,500.

The winning co-angler, based on a full field, receives $5,000 cash, and if the winner is a Ranger boat owner, Ranger will award a new Ranger 519 VX for a total prize package worth $35,000. Co-anglers who make the final round of each regular-season EverStart Series event and wear an EverStart/Evinrude shirt and cap on stage are also awarded points toward the EverStart Batteries and Evinrude Outboard Engines Co-angler Award. The co-angler receiving the most points by the end of the season receives an Evinrude 225HO Direct Injection outboard engine rigged on a Ranger boat equipped with a Minn Kota trolling motor and EverStart batteries.

In EverStart Series competition pros supply the boats, fish from the front deck against other pros and control boat movement. Co-anglers fish from the back deck and compete against other co-anglers. Every angler who receives weight credit in a tournament earns points that determine angler standings. Two hundred points are awarded to the winner, 199 points for second, 198 points for third, and so on. The top 40 pros and top 40 co-anglers from each of the EverStart Series’ five divisions – Central, Northeast, Northern, Southeast and Western – will advance to the $1 million EverStart Series Championship on Pickwick Lake Nov. 2-5. The top 10 pros and top 10 co-anglers from each division also qualify for the Wal-Mart FLW Tour, the world’s most lucrative tournament series, where they can compete for a share of $7.6 million in 2006.

For more information on FLW Outdoors and its tournament programs, browse this Web site or call (270) 252-1000.