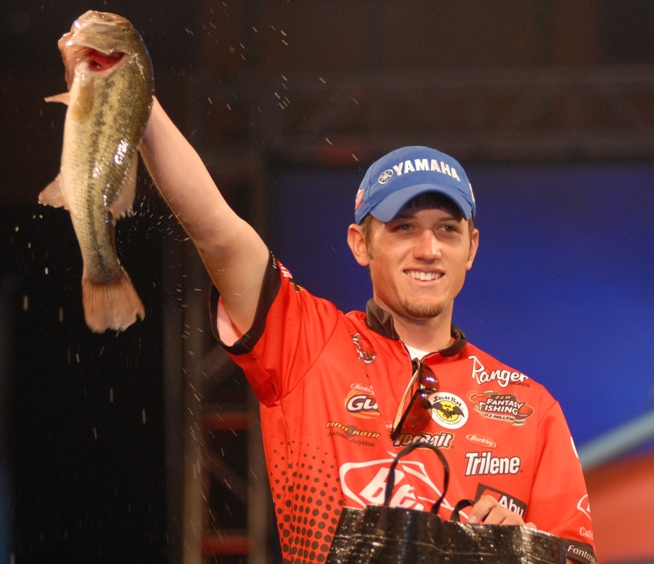 MINNEAPOLIS – Berkley co-angler Stetson Blaylock of Benton, Ark., was named the 2008 Wal-Mart FLW Tour’s Castrol Co-angler of the Year following the tour’s final qualifier, the Chevy Open, on the Detroit River July 10-13. Blaylock won the title with a total of 1,013 points out of a possible 1,200 over six qualifying events and will enter the Forrest Wood Cup presented by Castrol in Columbia, S.C., as the No. 1 co-angler seed.

“Honestly, I wasn’t even thinking about Angler of the Year when the season started,” said the 20-year-old Blaylock, who has earned more than $158,000 in his FLW Outdoors career. “I just wanted to win an FLW Tour event. I had already qualified for the Cup through the FLW Series East-West Fish-Off. After winning the Wal-Mart Open, I completely changed my mindset and focused on Angler of the Year. ”

Rounding out the top five contenders for the Co-angler of the Year title were Barry Isbell of Trussville, Ala., with 992 points; Paul Mueller of Southbury, Conn., with 972 points; Hector Delagarza of Garland, Texas, with 960 points; and Bryan Talmadge of Pell City, Ala., with 919 points.

For winning Castrol Co-angler of the Year, Blaylock received a $2,500 Wal-Mart gift card plus a year’s supply of Castrol marine oil.

Blaylock started the FLW Tour season off with a 79th-place finish on Lake Toho in Kissimmee, Fla. After Lake Toho, he rebounded nicely with an eighth-place on Lewis Smith Lake in Jasper, Ala. At the 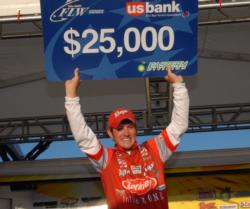 National Guard Open on Lake Norman in Charlotte, N.C., Blaylock finished 33rd. He then won $40,000 as the Wal-Mart Open champion on Beaver Lake in Rogers, Ark., and took second at the FLW Tour event on Fort Loudoun-Tellico Lakes in Knoxville, Tenn. At the season’s final qualifying event on the Detroit River in Detroit, the Berkley co-angler took 70th place. Through six events, Blaylock has earned $55,900 this season, and will be competing for a top co-angler award of $50,000 at the Forrest Wood Cup on Lake Murray Aug. 14-17. In his FLW Outdoors career, Blaylock has four victories and has finished in the top 10 17 times. Three of those four wins have come in the past nine months.

“I fish each tournament as though it’s the Forrest Wood Cup. That’s how hard I fish. Winning the FLW Series event on Pickwick last fall took the mental pressure off me where I didn’t have to think about that tournament that I haven’t won. From then on, my goal was to win an FLW Tour event.”

Blaylock said a key to his recent success has been Trilene’s new 100% Fluorocarbon line.

“I know for a fact that it’s the best line there is. That was a big key to my win on Beaver, getting bites on the lighter 20-pound-test line behind guys. A lot of my pros were using braid and they weren’t getting the bites I was. In Knoxville, I used the 12-pound test and a Berkley Sinking Minnow and finished second.”

In the foreseeable future, Blaylock plans to turn pro.

“I started fishing tournaments when I was 10 years old so I do have 10 years of experience. It’s a possibility for next year – we’ll see if things line up, but it’s definitely going to happen in the next few 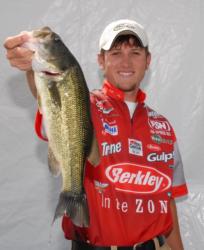 Tournament anglers aren’t the only ones winning big this season. With the introduction of FLW Fantasy Fishing, FLW Outdoors offers anyone the opportunity to enter for their chance to land the catch of a lifetime with the opportunity to win $7.3 million in cash and prizes. Players can become a virtual pro angler by signing up for Player’s Advantage, providing them with exclusive insider information that could guide them to a $100,000 victory at every FLW Tour stop and the Forrest Wood Cup. Player’s Advantage will give them an edge over the competition and increase their shot for a $1 million cash grand prize that will be awarded to the FLW Fantasy Fishing cumulative points winner. Those who visit FantasyFishing.com today can sign up for Player’s Advantage and FLW Outdoors will include a $15 Wal-Mart gift card.