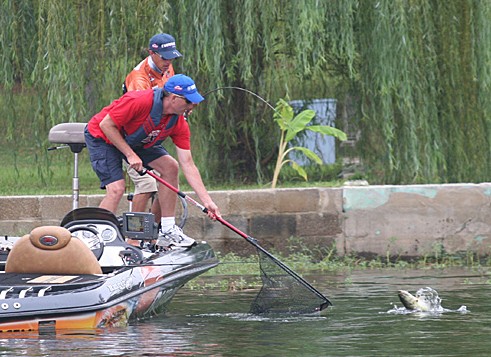 “My bites are very few and far between,” said Bennett, who has won more than $435,000 in FLW Outdoors events. “But if I get them, it’s a quality bite.

“Tomorrow I may get one or five bites,” Bennett added. “You never know what you’re going to get.”

Bennett admitted to “junk fishing,” or fishing without a pattern, although he said he has fine tuned his approach to what he’s fishing. Bennett said he’s targeting clear, shallow water with a patient retrieve, but he’s not afraid to speed the retrieve if his method isn’t producing.

“I’m covering a lot of water,” Bennett said. “If I don’t like it, I’m not staying and forcing myself.

“I’m nervous for tomorrow because I’ve run out of new water to fish,” Bennett added. “I’m going to start repeating some water tomorrow and hope I can catch a few fish doing that.”

While Bennett admitted to being nervous about the final day of competition, Lefebre exuded confidence.

“Today was a different day for me today,” said Lefebre, who has amassed more than $833,000 while recording four wins and 30 top-10 finishes in FLW Outdoors competition. “I’ve got a spot where they’re schooling, and I’ve been catching a limit pretty quickly and easily early, but today it was zippo. I had a limit in seven casts the first day and 12 or 13 casts the second day.”

Lefebre said he arrived at his first spot and caught nothing, which alarmed him, but he stuck it out and fished as many places as he could and picked up his limit by noon while fishing upriver. Lefebre said he was confident his pattern would hold up on the final day of competition.

“I just need a day like I had in practice,” Lefebre said. “I don’t want to be leading this tournament right now. I’d rather come from behind. I don’t want that pressure. Michael’s going to feel it.”

“This feels great,” said Hudson, who also won as a co-angler at the National Guard Open at Charlotte, N.C., in April. “Words can’t express it really. I get emotional just thinking about it.

“I won at Charlotte, but this is really a big deal,” Hudson added. “I’ve made a few top-10s and this is my first championship, but this is a big deal.”

Hudson relied on a spinning rig and a Red Crawler Berkley Power Finesse Worm Hand Pour. Hudson said he caught fish on the finesse worm in both shallow and deep water.

“That’s what I’m known for,” Hudson said. “I just try to keep it simple and just catch keepers. That’s what I try to do all year long.

“I was targeting shade,” Hudson added. “But fishing behind other guys, it’s not always available.”

Hudson opened the tournament in seventh place Thursday with five bass weighing 6-10 while fishing with Team Walmart pro George Cochran of Hot Springs, Ark. On Friday he jumped into fifth place on the strength of a four-bass catch weighing 6-03 while fishing with Team Chevy pro Larry Nixon of Bee Branch, Ark. Hudson sealed the deal Saturday when he fished with Travis.

Overall there were 22 bass weighing 41 pounds, 14 ounces caught in the Co-angler Division Saturday. The catch included no five-bass limits.

On Sunday, the first 1,500 children 14 and under visiting the Family Fun Zone will receive a free rod and reel combo. One lucky person attending the final weigh-in Sunday will even win a new Ranger Z20 powered by Yamaha. Participants must be present to win.

Also, multi-platinum recording artist Tracy Byrd will perform a free concert hosted by WCOS-97.5 FM on the main stage at The Colonial Center on Sunday at 4 p.m., just before the start of the final weigh-in.

Coverage of the Forrest Wood Cup will be broadcast to 81 million FSN (Fox Sports Net) subscribers in the United States as part of the “FLW Outdoors” television program airing Sept. 28 and Oct. 5. “FLW Outdoors” is also broadcast in Canada on WFN (World Fishing Network) and to more than 429 million households in the United Kingdom, Europe, Russia, Australia, Africa, Asia and the Middle East through a distribution agreement with Matchroom Sport, making it the most widely distributed fishing program in the world. The program airs Sunday mornings at 11 a.m. Eastern time in most markets. Check local listings for times in your area.

FLW Outdoors, named after Forrest L. Wood, the legendary founder of Ranger Boats, is the largest fishing tournament organization in the world. In 2008 alone the organization is offering more than 90,000 anglers the chance to win over $40 million through 230 tournaments in 10 circuits. FLW Outdoors is also taking fishing mainstream with the largest prizes and cash awards in the history of fantasy sports, $7.3 million.