“I’ve been doing this a long time and this is the first time I’ve qualified for the All-American,” said Staley, who said he has been tournament fishing for 25 years. “That’s what my goal was.”

“It’s deep and it’s got grass and the first days I fished grass in clear water on the lower end,” Staley said. “With all of the recent rain, the water was rising, so I went and looked for colored water.”

Staley said he found an area where a river was emptying colored water into Clarks Hill. Staley targeted points in the areas where the muddy water and clear water mixed.

“I caught fish early on a jig in 2 to 3 feet of water up on the bank as well as on spinnerbaits in pockets,” Staley said. “When I targeted the points, I threw a chartreuse shad Strike King Series 5 crankbait on points that dropped from 10 to 25 feet. I was actually targeting suspending fish. And that’s where I caught my bigger fish.”

Staley said he caught a quick limit on a spinnerbait and began culling with the jig and crankbait on the second day of competition. On the final day of the event, Staley spun the hub on his prop and was dead in the water.

“A friend of mine who failed to make the cut decided to turn around and help me out,” Staley said. “He was already headed home. I fished around and caught a limit while I was waiting on him. After I got the hub changed out I made about a 30-mile run and culled nearly every fish I had caught. I got lucky and the Lord blessed me.” 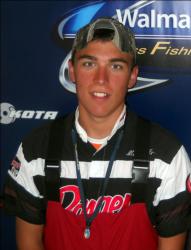 Evinrude or Yamaha motor as the co-angler winner Saturday thanks to 11 bass weighing 21 pounds, 14 ounces.

The top 40 boaters and 40 co-anglers in BFL’s North Carolina, Choo Choo, Gator and Music City divisions advanced to this no-entry-fee Clarks Hill Lake Regional Championship. All seven of the BFL regional championships will each send six boaters and six co-anglers to the no-entry-fee Walmart BFL All-American presented by Chevy. Anglers who compete in all five regular-season events within a division but do not advance to a Regional Championship are eligible to compete in the Chevy Wild Card, which will also send six boaters and six co-anglers to the All-American for a total of 48 boaters and 48 co-anglers advancing through BFL competition.