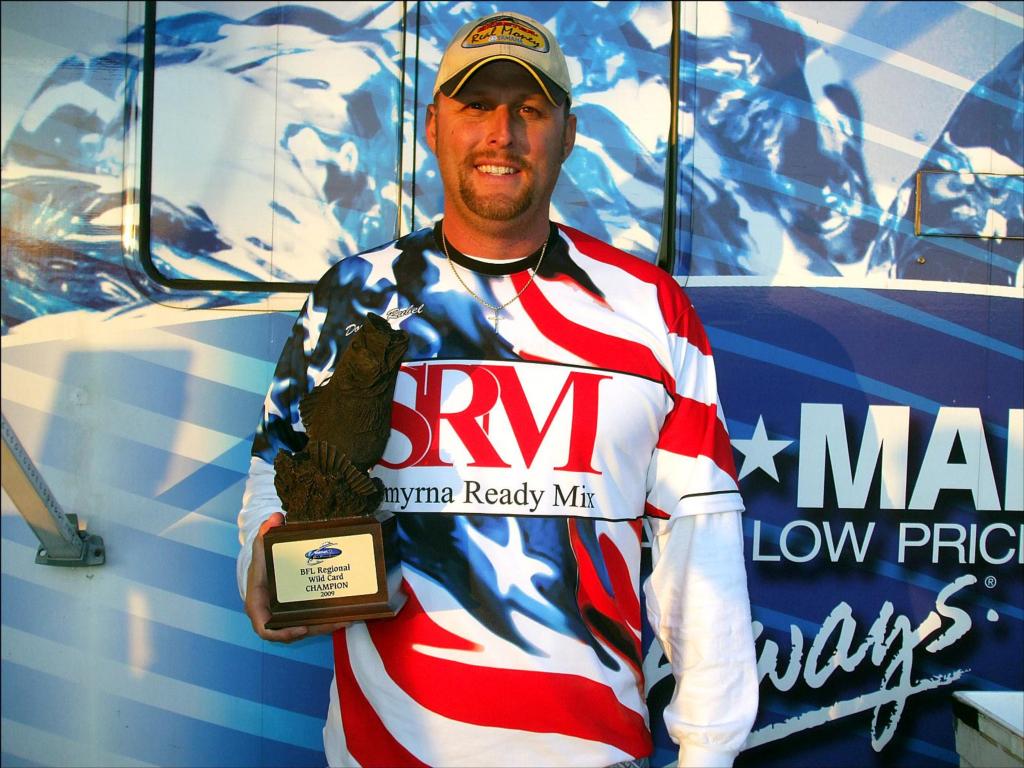 GALLATIN, Tenn. – On Saturday, Donnie Rubel of Murfreesboro, Tenn., won the Walmart Bass Fishing League Wild Card tournament, presented by Chevy and held on Old Hickory Lake, with a two-day catch of seven bass weighing 19 pounds, 10 ounces. The win qualifies him for the 2010 BFL All-American, where he could ultimately win a top prize of $140,000 and a trip to the 2010 Forrest Wood Cup. In addition, the victory earned Rubel $4,777 from the optional entry-fee-pot proceeds.

“It was a tough day of fishing,” said Rubel. “I really had to work hard.

“The rain that we got last night really muddied up the water in the creeks, but I just kept chuckin’ and winding and was able to get two keepers in the boat today. It was tough; I made over a thousand casts!”

Rubel was fishing shallow waters in depths of about 4 feet, using Lucky Craft crankbaits. This will be Rubel’s first trip to the BFL All-American.

Jason Boyett of Atlanta, Ga., qualified for the BFL All-American and earned $2,535 from the optional-entry-fee pot as the co-angler winner Saturday thanks to a two-day total of seven bass weighing 11 pounds, 12 ounces that he caught on a Rat-L-Trap.

Anglers who compete in all five regular-season events within a division but do not advance to a Regional Championship are eligible to compete in the Chevy Wild Card, which will send six boaters and six co-anglers to the 2010 BFL All-American where a total of 48 boaters and 48 co-anglers will compete. The seven regional championships plus the Wild Card championship each send six boaters and six co-anglers to the no-entry-fee Walmart BFL All-American presented by Chevy, which features a $1 million purse and a top award of $140,000 in the Boater Division and $70,000 in the Co-angler Division.

The winning boater and winning co-angler at the All-American will advance to the no-entry-fee Forrest Wood Cup in Atlanta in 2010. In all, the BFL offers weekend anglers the opportunity to qualify for three no-entry-fee championships with total cash awards exceeding $3.5 million. Plus, the top 40 boaters and 40 co-anglers from each BFL division may move up to the Stren Series for 2010 while All-American champions have the option to advance directly to the Walmart FLW Tour.