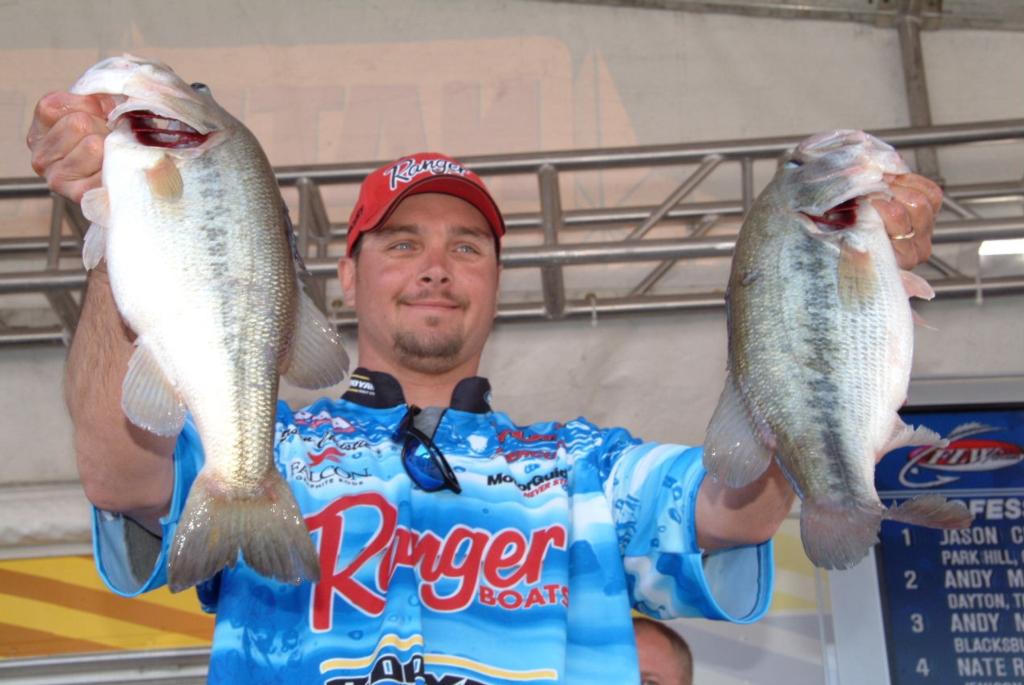 CHARLOTTE, N.C. – Blue skies and warm temperatures greeted anglers for the first day of competition Wednesday at the FLW Tour event presented by National Guard on Lake Norman. Pro Jason Christie of Park Hill, Okla., crossed the stage with a five-bass limit weighing 16 pounds even to lead day one. Christie now holds a 1-pound lead in the tournament featuring anglers from all across the country.

“What I’m trying to fish is the pockets I think the fish are coming into,” said Christie, whose weight included a bass that weighed 5 pounds even as well as one that was more than 4 1/2 pounds. “I was catching a lot of fish early. Number one, I’m trying to cover as much water as I can and looking at new water each day.”

Christie said he fished a pretty popular area of the lake the first day of competition and didn’t have other boats to compete with.

“I think there’s an area of the lake that guys went and checked and I think the water has changed,” Christie said. “I think it’s cleared up a lot and the fish are really moving up into the creek.

“If I can get 12 pounds tomorrow … I think that’s realistic,” Christie added.

“I was really relaxed,” Morgan said. “It was a beautiful day. It wasn’t cold, rainy or windy. It was just a beautiful spring day. It was kind of slow for me today. I caught only seven or eight keepers.

“The afternoon is kind of the deal,” Morgan said. “The afternoon, after 1 o’clock … you need to be where there’s a fish or two.”

Morgan said he caught fish on a spinnerbait and crankbait as well as a finesse jig.

“I guess I’ve just got good karma here,” said Morgan, who finished second at the 2009 Lake Norman FLW Tour event. “It flows well, there’s a lot of cover and it spreads people out. Lake Norman’s not a giant lake like a Santee (Cooper Reservoir) or (Lake) Okeechobee, but it fishes big. You can get into an area and think, `Man, there’s nobody on the lake fishing today.'”

Rounding out the top-10 pros after day one on Lake Norman are:

Pros are competing for a top award of up to $125,000 this week plus valuable points in the hope of qualifying for the Forrest Wood Cup which will be held Aug. 5-8 at Lake Lanier in Atlanta, Ga., where they could win as much as $600,000 – the sport’s biggest award.

Rounding out the top-10 Co-anglers are:

Co-anglers are fishing for a top award of $25,000 this week plus valuable points that could help them qualify for the 2010 Forrest Wood Cup.

Anglers will take off from Blythe Landing located at 15901 N.C. Highway 73 in Cornelius, N.C., at 7:15 each morning. Thursday’s and Friday’s weigh-ins will also be held at the marina beginning at 3 p.m. Saturday’s final weigh-in will be held at the Cabarrus Arena & Events Center located at 4751 Highway 49 North in Concord, N.C., beginning at 4 p.m.

Fans will be treated to a Family Fun Zone & Outdoor Expo at Cabarrus Arena & Events Center on Friday from 5 – 9 p.m. and Saturday prior to the final weigh-in from 10 a.m. – 4 p.m. There will be a drawing for a Can-Am ATV compliments of 99.7 the Fox and rod and reel combos will be given to the first 300 kids under 14 in attendance on Saturday. The Family Fun Zone & Outdoor Expo includes Ranger boat simulators, the opportunity to interact with professional anglers, enjoy interactive games, activities and giveaways provided by sponsors, and learn more about the sport of fishing and other outdoor activities. All activities are free and open to the public. For a full schedule of events, additional information and to register for the ATV, visit FLWOutdoors.com/ngopen.