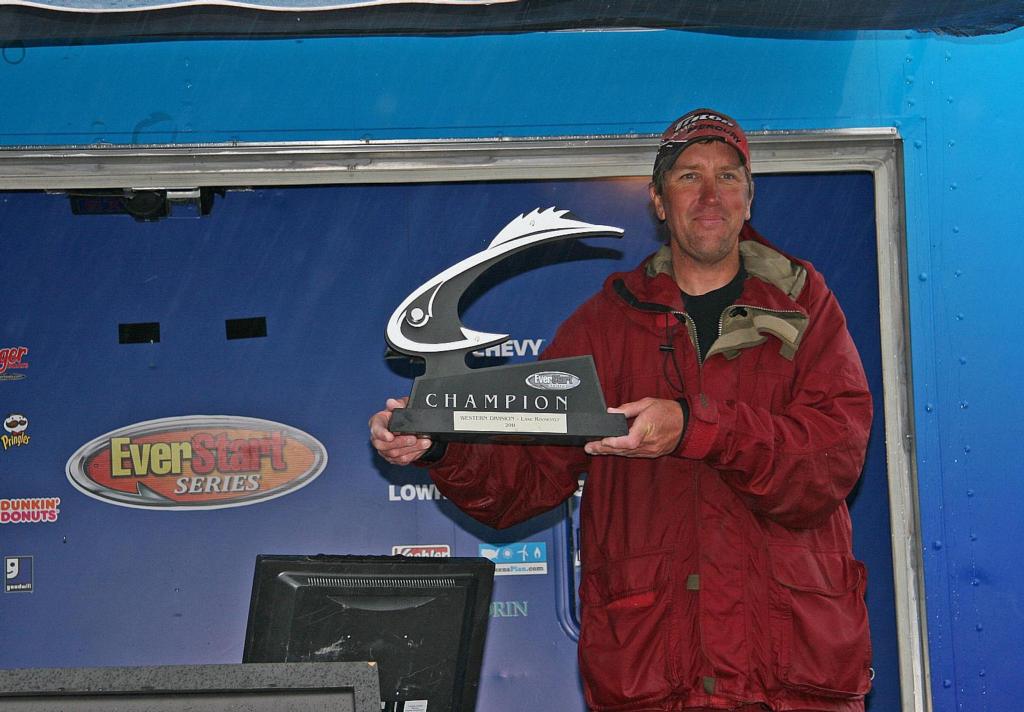 “I’m just speechless,” said Howden. “I found these fish in practice on Wednesday and I knew this was the area with the fish that would win the tournament. I was done fishing within an hour every day, today I was finished by 8:30.

“I have to thank my partner, Mike (Rychard), for literally giving me the shirt off his back,” Howden went on to say.” I have been flipping Strike King Coffee Tubes all week. The first fish I caught this morning I flipped into a tree and I had to go retrieve it through the water, I was literally drenched and Mike was good enough to give me his shirt.

Howden indicated that he was a little worried about what today’s weather would bring, however, despite unrelenting wind and rain, it didn’t seem to hamper a thing as he anchored today’s catch with a 6 pound, 9 ounce lunker.

Kevin Stewart caught the biggest bass of the tournament in the Pro Division Thursday – an 8-pound, 12-ounce bass – that earned him the day’s EverStart Series Big Bass award of $274.

Mike Rychard of Anderson, Calif., won the Co-angler Division and a Ranger boat with an Evinrude or Mercury outboard motor and $5,000 with a three-day total of 13 bass weighing 40 pound, 8 ounces. Rychard dedicated his victory to his father who is battling cancer.

Christopher Irigoyen caught the biggest bass of the tournament in the Co-angler Division Friday – a 7-pound, 9-ounce bass – that earned him the day’s EverStart Series Big Bass award of $182.

The next EverStart Series Western Division tournament will be May 5-7 at the California Delta in Stockton, Calif. and will be hosted by the Stockton Sports Commission.