Rain does not hamper walleye catch 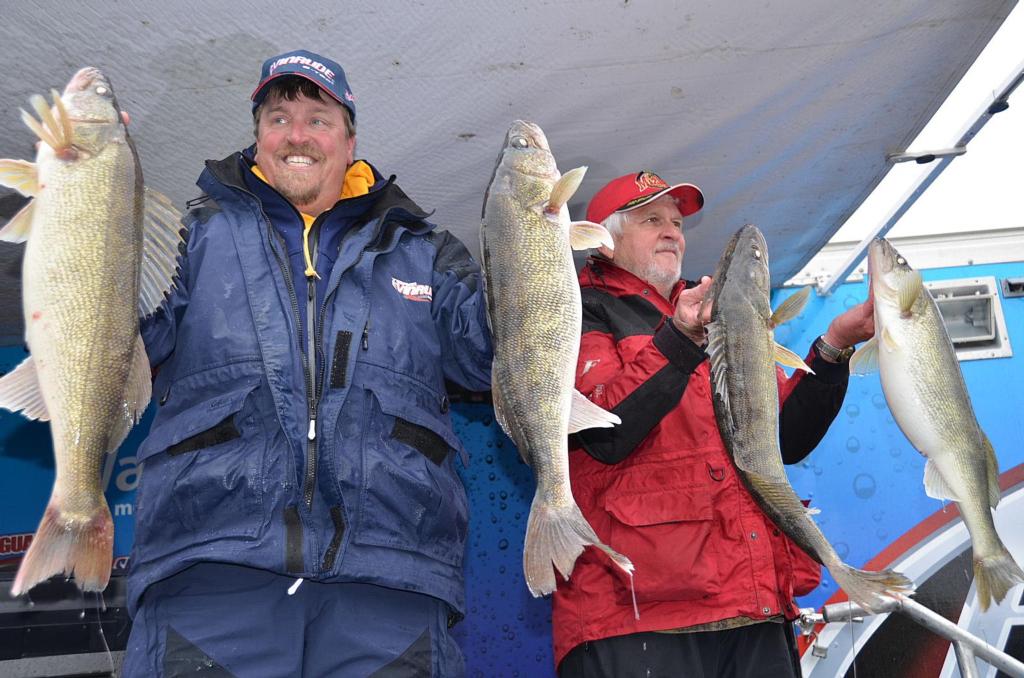 RED WING, Minn. – The steady rain that settled in late Thursday didn’t hamper walleye pro Tommy Skarlis of Waukon, Iowa, and his co-angler Jimmy Cox of Bono, Ark., on the first day of the National Guard FLW Walleye Tour presented by Evinrude. They brought in a limit of five walleyes weighing 36 pounds, 12 ounces to take a dominating lead on day one of the season opener being held on the Mississippi River in Red Wing, Minn.

“I am speechless,” said Skarlis, whose last FLW win was the 2008 Walleye Tour Championship. “This is the kind of day where you have to be modest and very thankful.”

Grieving the loss of Sonny Reynolds, FLW Walleye Tournament Director for the past 11 years, Skarlis referred to the heavy rain as tears from heaven as Sonny watched over all the anglers on day one of competition.

“The reason I moved back to Iowa was so that I could get back to river fishing,” Skarlis went on to say. “I grew up fishing the Mississippi River and I have a lot of fond memories of fishing in Red Wing. I learned a lot of tricks here and I am back to learn even more.

“Today I used a lot of home-made sinkers and jigs that I created with Do-it Molds and am having a lot of fun with it. Also key for me was the 7-foot St. Croix Legend LX 7-0 MHM rod that I used. It’s really over built but I need the sensitivity in the handle so that I can feel the snaggly bottom.

“Of the four programs I have identified for this tournament I only used one today,” Skarlis added. “I am confident that if I am left alone, the way I was today, I can catch the same quality of fish for the next two days. But I can’t stumble; I am fishing against the best caliber walleye anglers in the Midwest and I can’t afford a misstep.

Rounding out the remainder of the top 10 pros and co-anglers after day one on the Mississippi River are:

FLW is proud to announce that the 2012 FLW Walleye Tour will feature six pros running sponsor-wrapped boats for the upcoming season. 2011 FLW Walleye Tour Champion Dan Stier will represent EverStart; 2011 Angler of the Year Tom Keenan will don the Straight Talk colors; Dean Arnoldussen will be in the Walmart boat; John Balla will represent Dr Pepper; driving the Eggo boat will be Brian Brosdahl and representing Chevy is Jason Przekurat. The six boats are just one of the many exciting facets of the 2012 FLW Walleye Tour. The weekly television show `FLW’ will be broadcast in high-definition (HD) on NBC Sports Network and the Red Wing tournament will air Sept. 23 from 1 – 2 p.m. ET. `FLW’ is hosted by Chip Leer and is broadcast to more than 559 million households worldwide, making it the most widely distributed weekly outdoors-sports television show in the world.