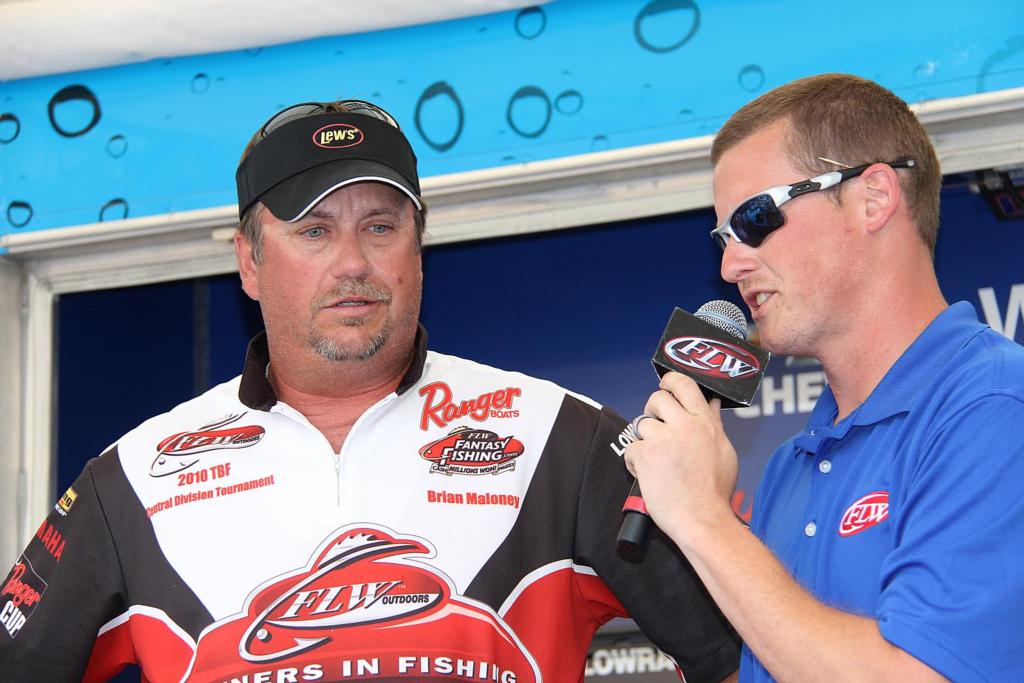 Top boater Brian Maloney caught most of his fish on shaky heads and a couple on crankbaits. Photo by David A. Brown.
May 18, 2012 • MLF • Phoenix Bass Fishing League

The BFL All-American is one of the longest-running championships in all of competitive bass fishing. The tournament, which is being hosted by National Harbor, features the top 49 boaters and top 49 co-anglers from across the country casting for top awards of up to $130,000 in the Boater Division and $60,000 in the Co-angler Division plus the opportunity to compete in the 2012 Forrest Wood Cup presented by Walmart on Lake Lanier Aug. 11-14.

Maloney got what he wished for on day 2 of the tournament – bluebird skies and warm temperatures – and he was able to capitalize on his wish of bringing in another solid sack of bass.

“We got on a big school of bass early,” said Maloney, who qualified through the Missouri TBF chapter. “But then it really slowed down about 9:30 to 10:00 o’clock, so we moved to a new area to try something different. That was wrong. We went back to the original area where we were fishing and the bite was back. I targeted the same ditches as yesterday; the bass seem to be sliding back in the holes as the tide pulls out.

“The bass I am catching appear to be post-spawn,” Maloney continued. “They are really beaten up and starting to heal, but I’ll take them. I was using shaky-head (rigs) again today and then started using crankbaits. I started using crankbaits just to try and hold the area. There were a lot of guys trying to move in, but I didn’t want the spot getting a lot of pressure so we started playing the waiting game.

“I’m not really familiar with this tidal game, but tomorrow should be a lot of fun.”

Only the top-10 anglers fish on the third and final day of the championship event on the Potomac River and the remaining field is:

Rounding out the top 10 co-anglers and fishing tomorrow are:

Anglers will take off from the National Harbor Marina located at 137 National Plaza in Oxon Hill, Md., at 8 a.m. Saturday morning with the final weigh-in beginning at 5:30 p.m. also at the marina.

Fans will be treated to the FLW Outdoors Expo at National Harbor Marina on Saturday from noon to 4 p.m. where they can learn more about the sport of fishing and other outdoor activities. The Expo includes Ranger boat simulators, the opportunity to interact with professional anglers, enjoy interactive games, activities and giveaways provided by sponsors. All activities are free and open to the public.

Coverage of the BFL All-American will be broadcast in high-definition (HD) on NBC Sports Network when “FLW” airs Sept. 2 from 1 – 2 p.m. ET. “FLW” is hosted by Jason Harper and is broadcast to more than 559 million households worldwide, making it the most widely distributed weekly outdoors-sports television show in the world.