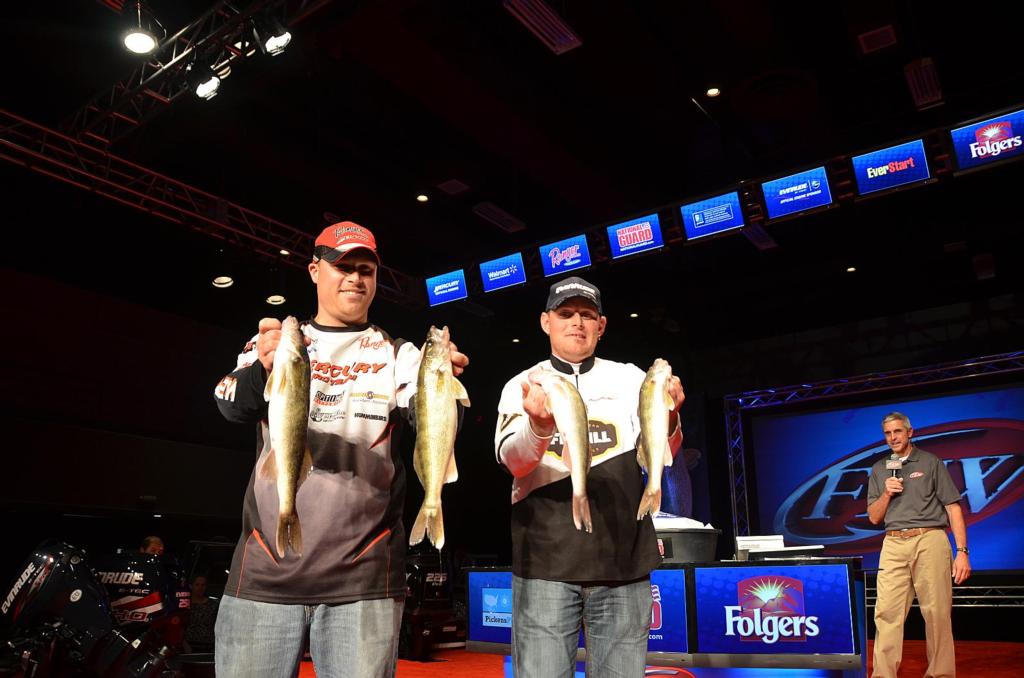 DAVENPORT, Iowa – Forty-two of the top walleye pros in the world began their four-day competition for a top cash award of $100,000, the richest prize in walleye fishing, at the National Guard FLW Walleye Championship on the Mississippi River on Thursday.

National Guard FLW Walleye Tour pro Danny Plautz of Madison, Wis., and co-angler Anthony Erdmann of Watertown, Wis., weighed in the day’s only five-walleye limit at 8 pounds, 14 ounces to jump to the top of the day one leader boards in their respective divisions. The duo now holds a slim 1-pound, 13-ounce lead over pro Ted Takasaki of Sioux Falls, S.D., and co-angler Tom Wiehoff of Pierre, S.D., who caught three walleye weighing 7-1.

“I had one spot where I caught my fish today,” said Plautz, who already has two top-10 tournament finishes in the 2012 season. “I stuck it out all day long and was lucky to pull out five fish. It’s an area that I found on my first day of practice. I caught a couple of fish and left it, and hadn’t been back since.”

While most tournament competitors decided to make the long run through the locking systems to fish in pool 14, known for having a better walleye population, Plautz decided to look for areas closer to the takeoff marina to maximize his fishing time.

“I’m staying in pool 16,” said Plautz. “The area that I’m fishing is pretty big, but I’ve really keyed in on one little spot that is paying off for me. There are a couple of other boats in the area, but they don’t really bother me. I’ve got the right baits.

“I’m casting crankbaits, but the specifics definitely mattered,” Plautz continued. “I don’t want to discuss what types or colors I’m using, but I will say I’m fishing shallow. And the current is definitely playing a role in how I’m catching my fish.

“I’m one of the first boats to launch tomorrow, so I’m confident that I can get back to my area first,” Plautz said. “I knew that I would catch a couple of fish out of there today, but I really didn’t expect to catch a limit. I know there’s still fish in the area, though, and I’ll be happy if I can get a couple of more fish tomorrow. I’m just going to fish hard the next couple of days and do the best that I can.”

The top 10 pros and co-anglers after day one on the Mississippi River are:

Overall there were 54 walleyes weighing 101 pounds, 2 ounces caught by 42 boats Thursday. Plautz and Erdmann had the only five-walleye limit of the day.