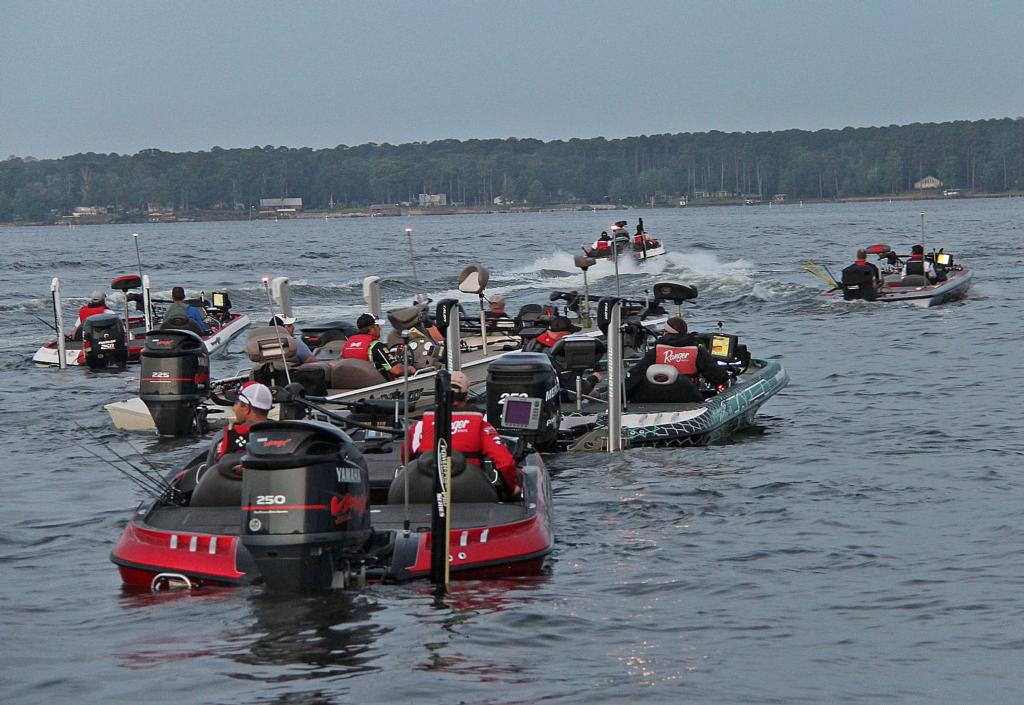 Boaters take off for their first crack at Toledo Bend. Photo by David A. Brown.
February 6, 2013 • MLF • Press Releases

“In my opinion, it is the best tournament lake in the country,” said Kellogg’s pro Jim Tutt of Longview, Texas. “There are a lot of ways you can catch them and there are a ton of healthy fish. On Toledo you can fish any type of water that you like to fish. You can go shallow, you can go deep, you can fish wood or you can fish grass.

“It will be a definite pre-spawn tournament,” Tutt continued. “Depending on how warm the water gets there might be a few spawners here and there, but the majority of the fish will be pre-spawn. The way the hydrilla is setting up has made reaction-style baits hot. My advice to college anglers would consist of three things: Rat-L-Traps, Rat-L-Traps and Rat-L-Traps.”

Tutt suspected the only thing that could keep this event from being a great tournament would be a strong northern wind. Tutt said this can wreak havoc on Toledo Bend by dirtying the waters and making boat control a nightmare for even the most experienced anglers. Tutt estimates the winning team will bring more than 20 pounds to the scales.

Anglers will take off from Paradise Point Park located in Hemphill, Texas, at 7 a.m. Saturday. Weigh-in will be held at the park beginning at 1:30 p.m. Takeoff and weigh-in are free and open to the public.

Schools competing in the Toledo Bend Reservoir tournament, which is hosted by Sabine County, include:

U. of Louisiana-Monroe – Nick Ladart and Brain Eaton, both of Monroe, La.

University of Arkansas-Little Rock – Jeremy Hall and Troy Johnson, both of Benton, Ark.