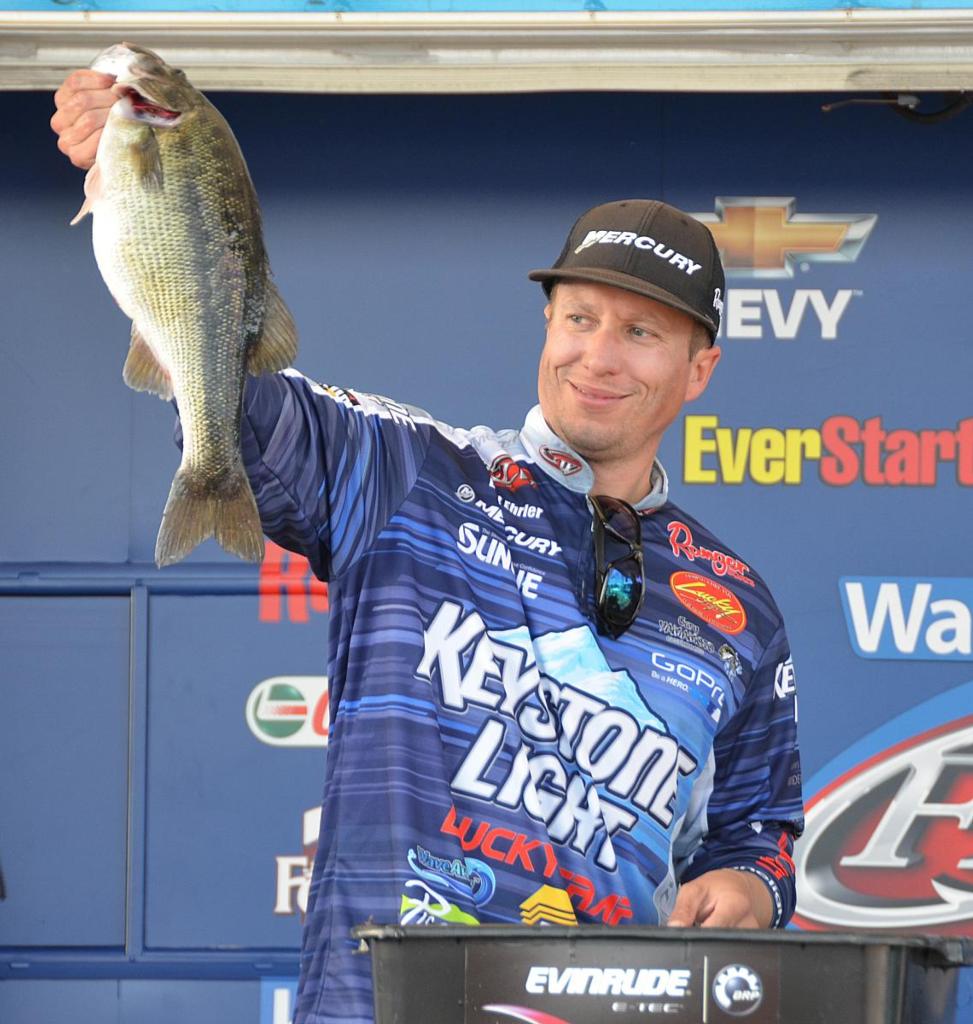 JASPER, Ala. – Keystone Light pro Brent Ehrler weighed in the largest stringer for the second consecutive day at the Walmart FLW Tour on Lewis Smith Lake presented by Evinrude, giving him a commanding lead heading into the third day of competition. A full field of the world’s best professional anglers continued their battle Friday for the top prize of up to $125,000.

The Redlands, Calif., angler brought another five-fish limit of spotted bass to the scales Friday, this one weighing 16 pounds, 7 ounces. With a two-day catch of 10 bass weighing 33-15, Ehrler now holds a 6-pound, 1-ounce lead over second-place pro Koby Kreiger of Okeechobee, Fla., who has a two-day total of 10 bass weighing 27-14.

“It took me a long time to catch a limit today,” said Ehrler, who currently sits in a three-way tie for most wins in FLW Tour competition with five. “It was really tough. I think that my good area that I had yesterday is over with. I was able to catch one big one off of it, but I think they’ve moved on and I’m going to have a much tougher time trying to find the big fish tomorrow.

“I absolutely hate leading tournaments this early,” Ehrler said. “I like the weight that I have caught the last two days, but I would much rather fly under the radar and work my way up on the final day.”

Ehrler was not ready to talk about specific baits used, but said he had seven different rods on his deck. He fished mainly in the same areas as yesterday, and said the pressure on the lake was having an effect on the fishing.

“Every day it has been harder and harder to catch five fish,” Ehrler said. “The weather has been up and down, but it’s been consistent with no real fronts coming through. It has to be the tournament pressure on the lake.

“I think that timing is crucial in this event,” he continued. “There are a few spots that I watched guys fish and then leave that I pulled up on later in the day and was able to catch a couple of nice ones. I’m not doing anything different; I think I’m just getting there at the right time.

“My gameplan for tomorrow is to just run the spots that I have been and hopefully I can catch a couple of big ones,” Ehrler went on to say. “I’ve looked around at a bunch of new areas and I haven’t really found a whole lot to get me excited. I might try out some new stuff, but I don’t plan on spending a lot of time trying to find them.”

The top 20 pros that will fish Saturday on Lewis Smith Lake are:

Biffle won the 3M ScotchBlue Big Bass Award on the pro side Friday with a fish weighing 6 pounds, 5 ounces worth $500.

For this event, FLW was issued a permit from the Alabama Department of Conservation and Natural Resources that exempted tournament competitors from the normal lake slot limit that states all bass measuring 13 to 15 inches must be immediately released.

Fans will be treated to the FLW Outdoors Expo at Walmart on Saturday and Sunday from noon to 4 p.m. prior to the final weigh-ins. The Expo includes Ranger boat simulators, the opportunity to interact with professional anglers, enjoy interactive games, activities and giveaways provided by sponsors, and fans can learn more about the sport of fishing and other outdoor activities. On Sunday, country music artist Dylan Scott will perform a free concert for fans on the FLW stage starting at 3 p.m. All activities are free and open to the public.