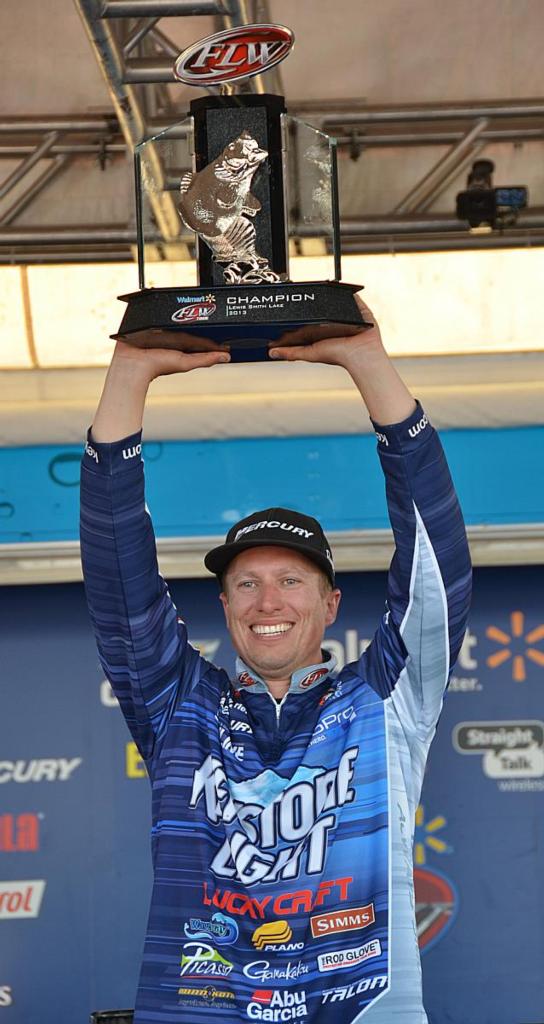 JASPER, Ala. – Keystone Light pro Brent Ehrler brought the largest stringer to the scales Sunday – for the third time in four days of competition – to win the Walmart FLW Tour on Lewis Smith Lake presented by Evinrude. Ehrler weighed in a five-bass limit worth 14 pounds, 11 ounces to win the $125,000 prize after leading wire-to-wire in the four-day tournament that showcased a full field of the best bass-fishing professionals in the world.

“This was one of the toughest tournaments that I have ever fished,” said Ehrler, who became only the third angler in FLW history to surpass $2 million in career earnings with his win on Sunday. “I was so stressed out; I was waking up at 2 or 3 a.m. every morning thinking about where I was going to fish that day. Fortunately, I was able to catch a couple of big ones off of a couple of areas where I knew they lived. They were very tough to catch, though.

“Most of the fish that I weighed in this week came on a green pumpkin-colored Yamamoto Senko wacky-rigged with a Gamakatsu hook,” Ehrler continued. “The other guys weren’t doing that. The only other angler that I think was throwing a Senko was Cody Meyer (who finished in eighth place). It was one of the keys for me this week, as the bigger fish really favored that Senko worm.

“Three or four fish that I weighed in earlier this week came from drop-shotting a morning dawn-colored Roboworm,” Ehrler said. “Today, the conditions changed and the wind was blowing real hard. I picked up a Picasso School E Rig when it got nasty and was able to catch my kicker on it. After that, I was able to slow down and relax. I culled up a few more times in the afternoon on the Senko.”

Ehrler said he fished mostly around the main body of Ryan Creek and never tried venturing back into the pockets as some anglers did.

“Those fish are coming off that main river and starting to stage,” he said. “They were suspending deep on the trees. I would throw the Senko, and the bait would take a long time to get down there.”

After his second-place finish at the first FLW Tour event of the year last month at Lake Okeechobee and his victory today on Lewis Smith Lake, Ehrler now has his sights set on even bigger prizes – Kellogg’s Angler of the Year and Forrest Wood Cup champion.

“I’ve been real close in the past, but I’ve never had that Angler of the Year title,” Ehrler said. “To be in the hunt for Angler of the Year feels really great right now, but my number one goal is always to make it to the Forrest Wood Cup. That’s the most prestigious tournament that you can ever win. We’re early in the season, but I feel good right now and I hope it can pan out for me for the rest of the year.”

Pros competed for a top award of up to $125,000 this week plus valuable points in the hope of qualifying for the 2013 Forrest Wood Cup presented by Walmart, the world championship of bass fishing. The top 35 anglers in the point standings from the six events on the 2013 Walmart FLW Tour will qualify. The 2013 Forrest Wood Cup will be in Shreveport, La., Aug. 15-18 on the Red River.

The Tour stop on Lewis Smith Lake presented by Evinrude was hosted by the Chamber of Commerce of Walker County and was the second of six events on the Walmart FLW Tour in the 2013 season. The next Walmart FLW Tour event will be held at Beaver Lake presented by Kellogg’s and will be held April 11-14 in Rogers, Ark. The event will be hosted by the Rogers Convention & Visitors Bureau and boats will launch from Prairie Creek Park in Rogers. For a complete schedule, visit FLWOutdoors.com.