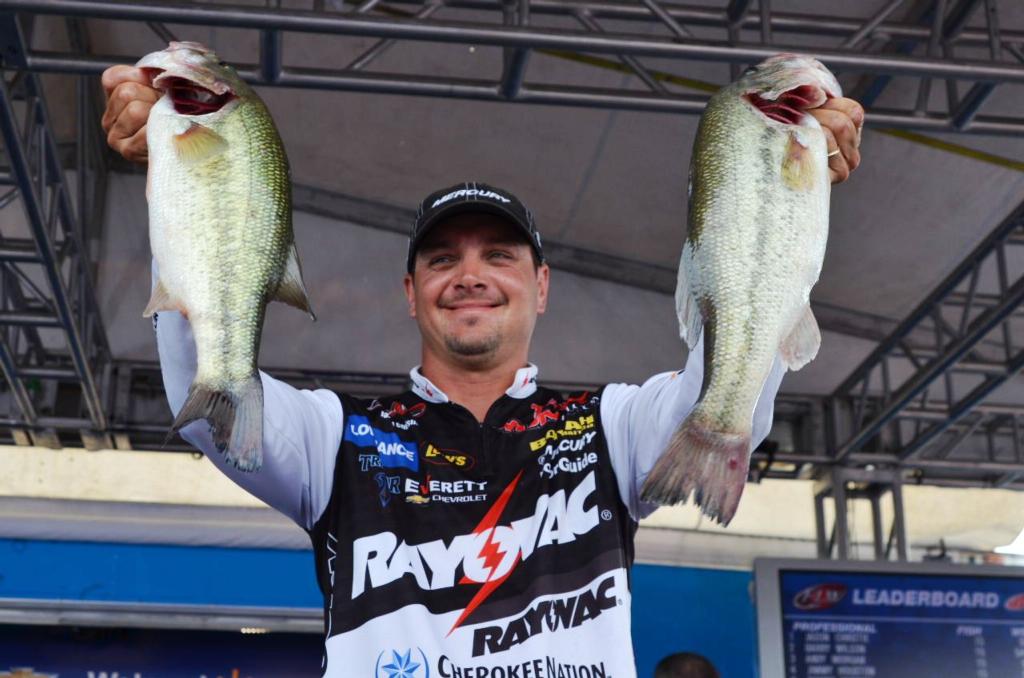 GROVE, Okla. – Rayovac pro Jason Christie of Park Hill, Okla., brought a five-bass limit to the scales Saturday weighing 17 pounds, 10 ounces giving him a three-day cumulative total of 15 bass for 58 pounds, 4 ounces and the lead for the third consecutive day at the Walmart FLW Tour at Grand Lake presented by Castrol. He now holds a solid 31/2-pound lead over second place pro Barry Wilson of Birmingham, Ala., in the event that features the best bass-fishing anglers in the world casting for the top cash award of up to $125,000.

“All that you can ask for in a bass tournament is to go into the last day and have a legitimate chance to win,” said Christie, who is seeking his second FLW Tour victory of the season after winning at Beaver Lake just two months ago. “If I can catch what I did today tomorrow, I have a good chance.”

Christie said that Saturday was his slowest day of the tournament so far, and that he only boated 10 to 12 keeper bass.

“We won’t know until tomorrow whether my fish will hold up or not,” Christie said. “I think I’m going to try a couple of different spots early, because my main area didn’t fire up until later today. I don’t have any other areas that I have the confidence that I do in my main area, though. Hopefully, they replenish.”

“I ran way down the lake today and tried to catch some crankbait fish,” Christie said. “I really did that to eliminate it. I didn’t want to be thinking about anything else tomorrow other than flipping bushes. It’s definitely getting a little tougher in my area, but I do believe that it can be won up there. We’re all great fisherman, but it’s all about how good your locations are… and if they can hold up for four days.”

The top 10 pros advancing to the final day of competition on Grand Lake are:

Keith Honeycutt of Temple, Texas, won the co-angler division and $25,000 Saturday with a three-day total of 15 bass weighing 45 pounds, 13 ounces, followed by Anthony Goggins of Auburn, Ala., in second place with 15 bass weighing 41 pounds, 6 ounces worth $7,343.

“When I drew Jason Christie today, I just thought to myself that there is no way in the world that he can flip every single bush,” said Honeycutt, who has earned more than $180,000 via fishing as a co-angler in FLW competition. “I just knew that there had to be a few bushes here and there for me.”

Honeycutt said that he caught his fish this week by flipping bushes and throwing shallow crankbaits.

“I really do appreciate what Jason (Christie) did for me today,” Honeycutt went on to say. “I had three bass at 1 p.m. and Jason heard me sighing in the back of the boat. He asked me if I wanted to go crankbait fishing, so of course I smiled and told him that I would love to go. We made a 25-mile run and went crankbait fishing, and I caught three or four more fish and got my limit. There is no doubt that Jason left the area where this tournament is going to be won to help me, and I really do appreciate it.”

In addition to the top award of $25,000, co-anglers were also fishing this week for valuable points that could help them qualify for the 2013 Forrest Wood Cup presented by Walmart. The top 35 co-anglers in the point standings from the six events on the 2013 Walmart FLW Tour will qualify.

Fans will also be treated to the FLW Outdoors Expo at the Walmart on Sunday from noon to 4 p.m. prior to the final weigh-in. The Expo includes Ranger boat simulators, the opportunity to interact with professional anglers, enjoy interactive games, activities and giveaways provided by sponsors, and fans can learn more about the sport of fishing and other outdoor activities. All activities are free and open to the public. Also on Sunday, country music artist Dylan Scott will perform a free live concert on the Walmart weigh-in stage at 3 p.m.