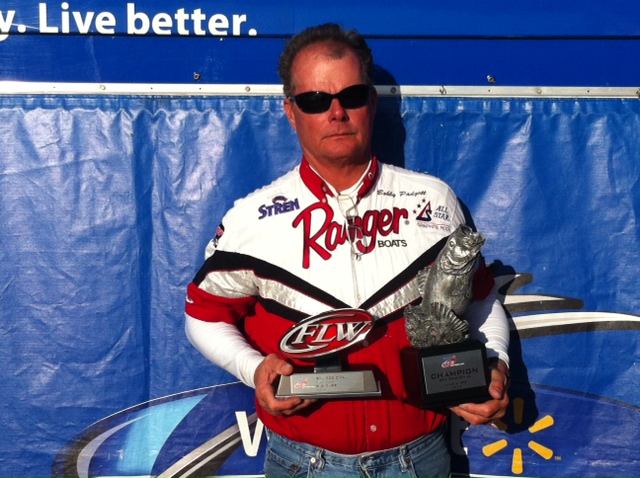 LANETT, Ala. – Bobby Padgett of Lawrence, Ga., won the Walmart Bass Fishing League (BFL) Chevy Wild Card on West Point Lake with a two-day total of 10 bass weighing 21 pounds, 15 ounces. For his victory, Padgett won $3,875 and entry into the BFL All-American presented by Chevy. The tournament was hosted by the Greater Valley Area Chamber of Commerce.

Padgett took advantage of a cold front on his home lake to qualify for the All-American for the second year in a row.

“It was good,” Padgett said of his win. “I’ve won a couple of them before, but it was fantastic. Everything just played out.

“This is my home lake,” continued Padgett. “It threw me a little bit of a curve. Usually you can catch them out deep really good this time of year. I’ve been fishing here 30 years; this is the first time it’s ever been full in 30 years. Usually, the lake is 6 or 7 feet low.

“We had a tremendous cold front come through on Thursday. It dropped down to 35 degrees and the wind started blowing. I was one of the last boats on the first day, so I just went fishing.

“On about the fourth cast I caught a pound-and-a-halfer on a spinnerbait at the dam,” said Padgett. “On the way back up the lake there was no one fishing windward points. So I decided to try it. The first point we came to we caught five (fish).

“It was easy fishing. If I didn’t know the lake at all it’s what I would have done.

“After I caught a limit I went upriver into the main creeks and I threw a crankbait and a Zoom Speed Craw. I caught a 6-pounder and a 3-pounder,” continued Padgett. “I was fishing secondary channel bends with isolated brush. Nothing visible … everything was strictly on my depthfinder.

“On day two I knew I would only need about 6 pounds to qualify for the All-American, so I changed it up. I went to a couple of places where we could catch them deep and caught a limit, and then gave the rod to my co-angler.

“Around 12:30 I went back up to the areas I’d caught them on the first day, and I started throwing a crankbait and swimming a Speed Craw again, and I caught three largemouth doing that.

“Largemouth are the key to winning on this lake,” finished Padgett. “You’ve got to catch some. But the cold front also helped me tremendously. It turned the fish off on the second day and that helped me.

Padgett said he caught his fish swimming a Zoom Speed Craw, on a Zoom Z4 crankbait, on a Strike Zone spinnerbait and on a drop-shot rig. 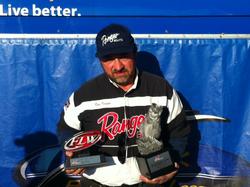 Ron Knight of Hot Springs, Ark., won the co-angler division with a two-day total of seven bass totaling 15 pounds, 14 ounces. For his efforts, Knight took home $1,890 and a berth in the BFL All-American tournament.