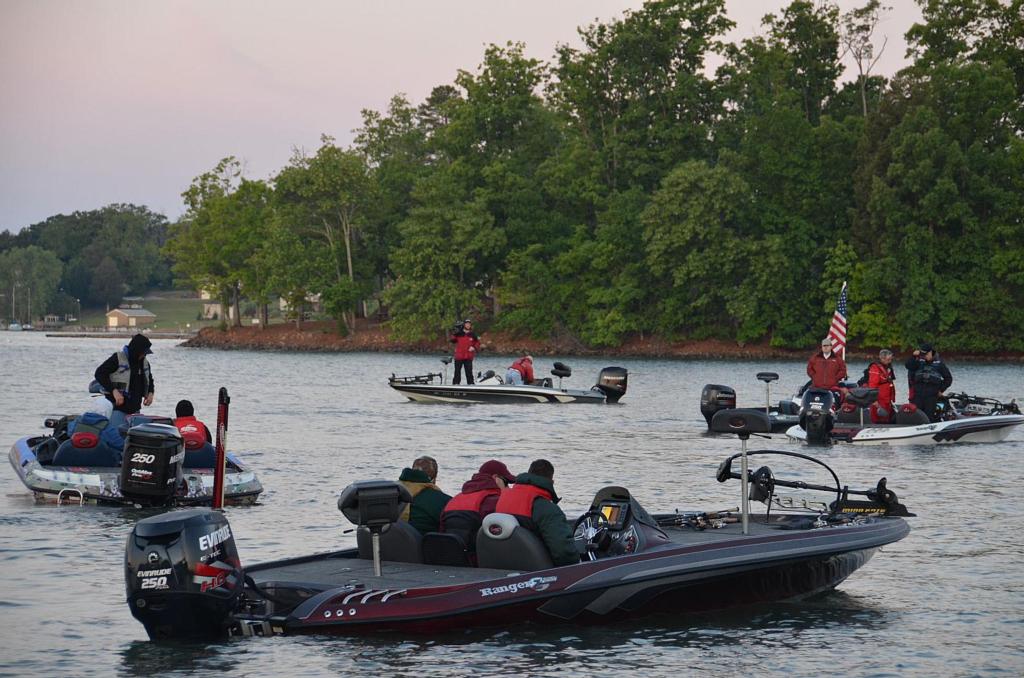 Opening takeoff at the 2012 FLW College Fishing National Championship is about to commence. Photo by Gary Mortenson.
March 3, 2014 • MLF • Archives

The High School National Championship is set to take place Sunday, March 9 on Lake Keowee. Teams competed last fall in five conference championships with the winner of each qualifying for the national championship.

Takeoff is at South Cove County Park at 7 a.m. and weigh-in is at 4 p.m. at the Walmart located at 1636 Sandifer Blvd. in Seneca, S.C. Both are free and open to the public.

The five teams competing for the High School National Championship are:

Also being held this week is the South Carolina State High School Fishing Championship and Anderson Open. These events will take place on Saturday, March 8 on Lake Russell.

There is a mandatory check-in and rules meeting at 6:30 p.m. on March 7 at the Crescent High School, located at 9104 highway 81 S., Iva, S.C. Takeoff is at safe light and the weigh-in takes place at 3 p.m at Mountain View Park.

Based on the highly successful 2009 launch of FLW College Fishing, which now enjoys participation by more than 600 colleges and universities nationwide, FLW and The Bass Federation (TBF) joined forces in 2011 to launch the first national High School Fishing program. By offering a high school bass fishing state championship in every state in the continental United States plus the province of Ontario, FLW and TBF are recruiting a record number of youth to the sport. Each year FLW and TBF operate more than 50 High School Fishing tournaments under the Student Angler Federation (SAF) umbrella, including opens, conference championships and a national championship that awards a $10,000 scholarship ($5,000 per student) to the winning two-angler team. The FLW/TBF SAF initiative remains the only national High School Fishing program.

SAF High School Fishing is a turnkey program that provides the following for just $25 per student:

• $1 million in insurance coverage for students, coaches, schools and volunteers

• Access to the largest volunteer angler network in the nation

• For students 16 and older, eligibility to win great prizes in monthly FLW giveaways