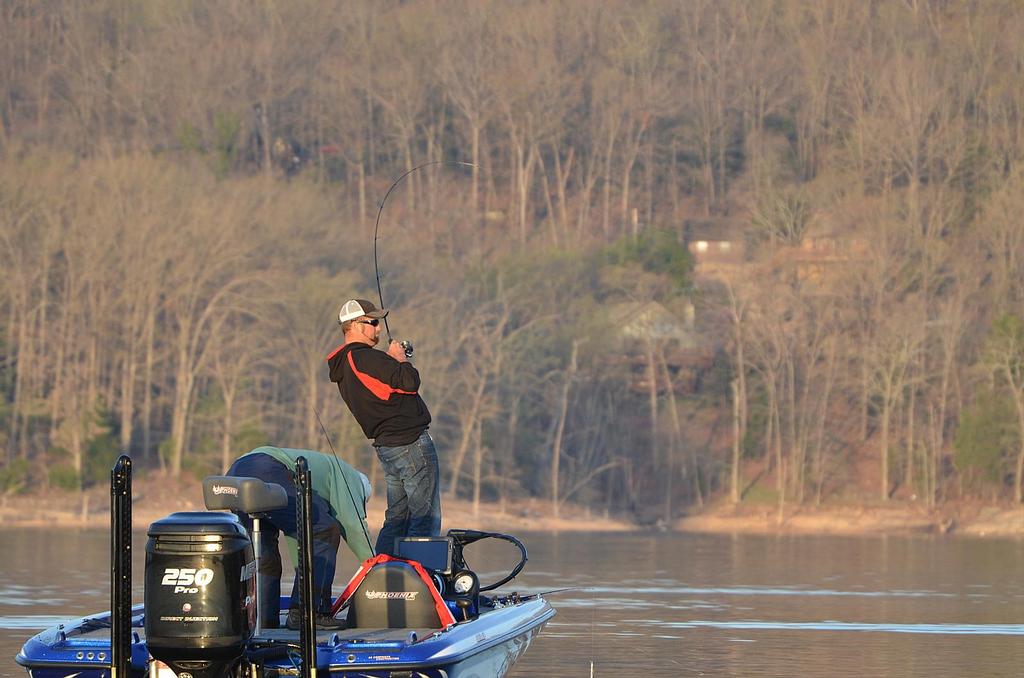 Spencer Shuffield leans back on a quality keeper that propels him to the top of the leader board. Photo by Kyle Wood.
April 11, 2014 • MLF • Archives

ROGERS, Ark. – Pro Spencer Shuffield of Bismarck, Ark., brought a five-bass limit to the scale weighing 13 pounds, 11 ounces to grab the lead on day two of the Walmart FLW Tour at Beaver Lake presented by Rayovac. Shuffield’s two-day cumulative weight of 29 pounds even gives him a 1 pound, 1 ounce lead over second-place angler Livingston Lures pro Andy Morgan of Dayton, Tenn., who has a two-day weight of 10 bass worth 27-15 as the tournament heads into the third day of competition. The field is now cut to the top 20 in the four-day event, hosted by Visit Rogers, that features 173 of the world’s best bass-fishing anglers competing for a top cash award of up to $125,000.

“I caught them quick this morning,” said Shuffield, the son of legendary Arkansas angler Ron Shuffield. “I knew that I was going to have to. There was no breeze and the lake was flat calm. After 10:30 this morning, it was brutal. I caught around 50 keepers yesterday, but today I only had like nine or 10. I can’t tell you how many 21/2- to 3-pounders that I saw coming after my bait today. They just wouldn’t bite it. We just didn’t have that breeze to give them that extra oomph.”

Shuffield said that he caught all of his fish on just two baits and that they were the same baits that he used Thursday. He said that he was targeting the transitional banks in Beaver Lake, looking for a specific type of rock and scouring the creeks for areas that “look right.”

“I’m just covering water,” Shuffield said. “The fish are still in the exact spots that I found them in during practice. The smallmouth just would not bite at all for me today, though. They’ve been the key fish for me every day, even in practice. Today I weighed in one largemouth and four spotted bass.

“The fish are still making their move in, it’s just that we didn’t have the wind today to make them bite,” Shuffield went on to say. “Tomorrow I see that the wind is supposed to blow pretty good again. I think it could get really crazy. I can’t wait.”

The top 20 pros that will fish Saturday on Beaver Lake are:

Shawn Murphy of Nicholasville, Ky., won the FLW Big Bass Award and $500 on Friday on the pro side with a bass weighing 5 pounds, 15 ounces.

Bryan New of Belmont, N.C., leads the co-angler division with 10 bass weighing 18-12 followed by Braxton Setzer of Auburn, Ala., in second place with eight bass weighing 17-6.

Anglers will take off from Prairie Creek Park located at 9300 N. Park Road in Rogers at 7 a.m. each morning. Saturday and Sunday’s final weigh-ins will be held at the John Q. Hammons Center located at 3303 Pinnacle Hills Parkway in Rogers beginning at 4 p.m.

Fans will also be treated to the FLW Expo at Walmart on Saturday and Sunday from noon to 4 p.m. prior to the final weigh-ins. The Expo includes Ranger boat simulators, the opportunity to interact with professional anglers, enjoy interactive games, activities and giveaways provided by sponsors, and fans can learn more about the sport of fishing and other outdoor activities. The first 150 children 14 and under who are accompanied by an adult will receive a voucher to redeem for a free rod and reel combo courtesy of KNWA each day after the final weigh-in. On Sunday, country music superstar Rodney Atkins will perform a free live concert on the Walmart weigh-in stage at 3 p.m. All activities are free and open to the public.

Coverage of the Beaver Lake tournament will be broadcast in high-definition (HD) on NBC Sports Network when “FLW” airs June 14 from 11 a.m.-12 p.m. ET. The Emmy-nominated “FLW” television show is hosted by Jason Harper and is broadcast to more than 564 million households worldwide, making it the most widely distributed weekly outdoors-sports television show in the world.