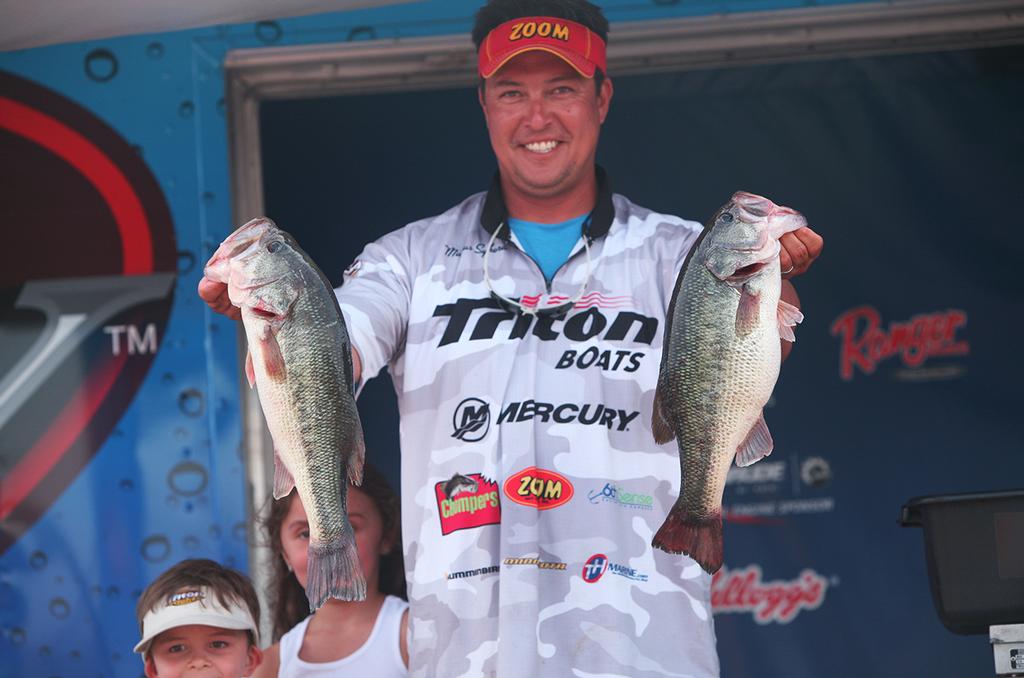 FLORENCE, Ala.- Marcus Sykora of Osage Beach, Mo., extended his lead at the Walmart BFL All-American presented by Chevy on Wilson Lake with five bass weighing 27 pounds, 4 ounces for a two-day total of 53-15. He has a commanding 14-pound, 6-ounce lead over second place angler Dino Moutogiannis of Newington, Conn., who has a two-day total of 10 bass weighing 39-9.

The BFL All-American is one of the longest-running championships in all of competitive bass fishing. The tournament, which is hosted by Florence/Lauderdale Tourism, features the top 49 boaters and top 49 co-anglers from across the country casting for top awards of up to $120,000 in the Boater Division and $60,000 in the Co-Angler Division, plus the opportunity to compete in the most lucrative tournament in bass fishing – the 2014 Forrest Wood Cup presented by Walmart on Lake Murray, Aug. 14-17.

“The first day I was done by 9 a.m., but today was a little slower,” Sykora said. “It took me longer to catch my weight, but I was happy to have a bigger bag today.”

Only the top 10 boaters fish on the third and final day. The top 10 that will fish tomorrow on Wilson Lake are:

The top 10 co-anglers that will fish tomorrow are:

Anglers will take off from Waterfront Marina located at 4451 Florence Boulevard in Florence at 7 a.m. Saturday morning with the final weigh-in be held following the Walmart FLW Tour weigh-in at Walmart located at 2701 Cloverdale Road in Florence beginning at 5:30 p.m.

Fans will also be treated to the FLW Expo at Walmart on Saturday from noon to 4 p.m. prior to the final weigh-ins. The Expo includes Ranger boat simulators and the Chevy Truck Tour plus the opportunity to interact with professional anglers and enjoy interactive games, activities, and giveaways provided by sponsors. Fans can also learn more about the sport of fishing and other outdoor activities. All activities are free and open to the public.