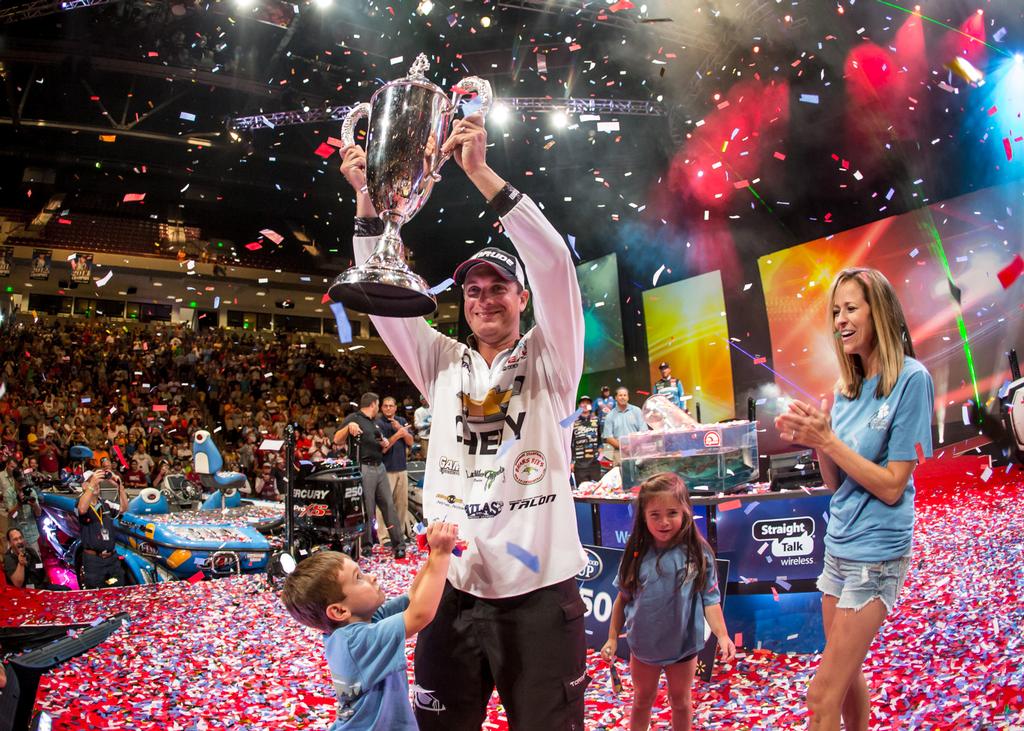 Chevy pro Anthony Gagliardi delightedly hoists the Forrest Wood Cup! Photo by Brian Lindberg.
August 17, 2014 • MLF • Press Releases
COLUMBIA, S.C. – Chevy pro Anthony Gagliardi of Prosperity, S.C., crossed the stage with a five-bass limit weighing 13 pounds, 14 ounces Sunday to claim the title of Forrest Wood Cup Champion at the Forrest Wood Cup at Lake Murray presented by Walmart. Gagliardi, with a four-day total of 19 bass for 51-2, won by a narrow 1-ounce margin over Straight Talk Wireless pro Scott Canterbury of Springville, Ala., and won the $500,000 prize in professional bass fishing’s world championship that featured 45 of the best professional anglers from across the country casting for the sport’s top cash award of $500,000.
“This is unbelievable,” said Gagliardi, who overcame an early-season disqualification at the first FLW Tour event of the year on Lake Okeechobee and managed to qualify to compete in the Forrest Wood Cup in just five events. “To win the Forrest Wood Cup, no matter where it is, is the most prestigious event that I could win in our sport. But to do it here, in front of all of these people who were rooting for me, it really just makes it so much more special.
“I’ve never felt like I did this morning,” Gagliardi continued. “I was running down the lake, the camera helicopter was running beside me. The feeling that I had, just being here, in this tournament, on my home lake with the support that I’ve had – it was such a special feeling that I’ve never experienced before in a tournament.”
Gagliardi said that he caught his fish this week on three key baits. On day one, he caught fish on a 5-inch Scaled Sardine-colored Basstrix swimbait with a 3/8-ounce Buckeye Lures jig head. He caught a few of his solid keeper fish up the Saluda River on a Texas-rigged 10-inch Zoom Ol’ Monster worm, and his key bait on Sunday was a Yamamoto Baits D-Shad soft plastic jerkbait.
“Every time this year that it looked like my run was going to end, I would catch a big one at the end of the day and stay alive,” Gagliardi said. “I’m super hard on myself when I don’t perform as well as I think I should, but my wife Kristin is always pulling me out of those little slumps. After my disqualification at Okeechobee, it was one of the lowest points of my life. I literally thought I had a zero-percent chance of making this tournament. She stayed positive and forced me to be positive too and that was crucial for me this season. I could not possibly be any happier at this moment.”
The top 10 pros finished the tournament in:
1st:          Chevy pro Anthony Gagliardi, Prosperity, S.C., 19 bass, 51-2, $500,000
2nd:         Straight Talk Wireless pro Scott Canterbury, Springville, Ala., 19 bass, 51-1, $60,000
3rd:          Brent Ehrler, Redlands, Calif., 20 bass, 50-11, $50,000
4th:          Casey Ashley, Donalds, S.C., 20 bass, 50-7, $40,000
5th:          Steve Kennedy, Auburn, Ala., 20 bass, 50-7, $35,000
6th:          Matt Herren, Ashville, Ala., 20 bass, 48-0, $30,500
7th:          Chevy pro Bryan Thrift, Shelby, N.C., 18 bass, 44-6, $26,000
8th:          Michael Wooley, Collierville, Tenn., 16 bass, 43-4, $24,000
9th:          Scott Martin, Clewiston, Fla., 16 bass, 35-13, $22,000
10th:        Rayovac pro Jacob Wheeler, Indianapolis, Ind., 13 bass, 33-7, $20,000
A complete list of results can be found at FLWOutdoors.com.
Overall there were 39 bass weighing 109 pounds, 15 ounces caught by pros Sunday. The catch included six five-bass limits.
Bryan New of Belmont, N.C., won the co-angler division and $50,000 Friday with a two-day total of seven bass weighing 15 pounds, 14 ounces followed by Jason Johnson of Gainesville, Ga., in second place with six bass weighing 12-8 worth $10,000.
The 2014 Forrest Wood Cup at Lake Murray presented by Walmart was hosted by Capital City/Lake Murray Country Regional Tourism.
FLW and Visit Hot Springs announced Friday that Hot Springs, Ark., would once again be hosting the Forrest Wood Cup, the world championship of bass fishing, Aug. 20-23, 2015, at Lake Ouachita. The last time the Forrest Wood Cup, the sport’s premier event, was held in Hot Springs was 2011.
FLW Tour pro Rich Dalbey of Greenville, Texas, was awarded the third annual Forrest L. Wood Sportsmanship and Community Leadership Award on Saturday, and a donation will be made to Dalbey’s charity of choice. FLW recognized the angler that best exemplified the ideals of sportsmanship and community service throughout the 2014 season. The Forrest L. Wood Sportsmanship and Community Leadership Award recognizes the individual who displayed overall commitment of sportsmanship and community leadership, on and off the water, by displaying ethical behavior, upholding integrity, class, selflessness, conservation efforts and kindness to others.
Coverage of the Forrest Wood Cup will be broadcast in high-definition (HD) on NBC when “FLW” airs Oct. 5 from 2-3 p.m. ET. The Emmy-nominated "FLW" television show is hosted by Jason Harper and is broadcast to more than 564 million households worldwide, making it the most widely distributed weekly outdoors-sports television show in the world.
For complete details and updated information visit FLWOutdoors.com. For regular updates, photos, tournament news and more, follow us on Facebook at Facebook.com/FLWFishing and on Twitter at Twitter.com/FLWFishing.