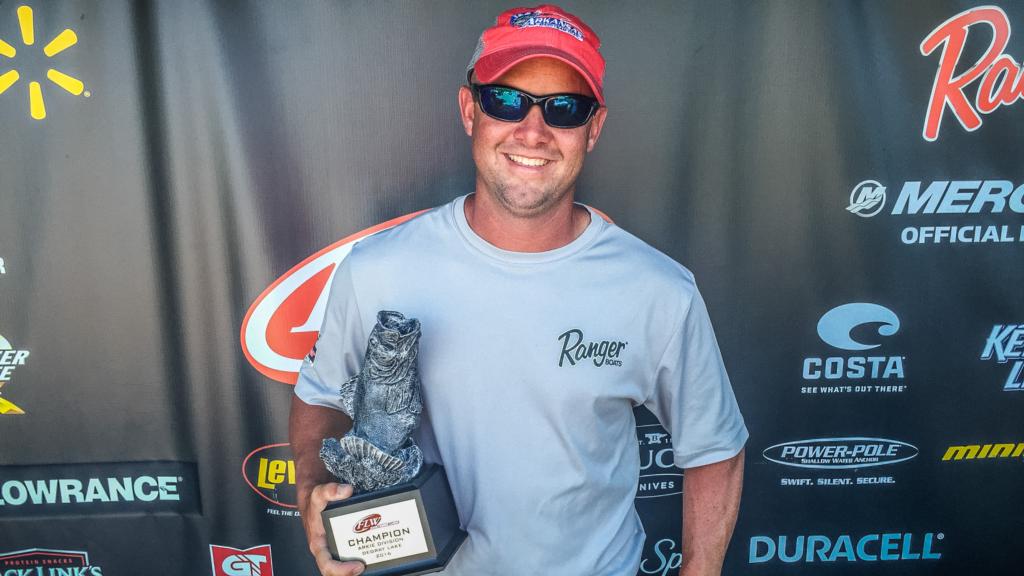 “I concentrated on pockets that had a lot of bushes from the dam all the way up the Caddo River,” said Kindy, who earned his third win in FLW competition. “I targeted postspawn bucks that were feeding on fry in the shade.”

“If the bushes were really thick, I’d flip the Hog,” said Kindy. “If they were scattered, I preferred to skip the Toad in there. I probably hit 20 different pockets. The sun needed to be high, but not directly above my area. That’s when the shade was the best.”

The Arkansas angler said he was able to hook 12 to 14 keepers throughout his day.

“I caught most of my fish between 9 a.m. and 1 p.m.,” said Kindy. “Two of my limit bass – including my biggest – came on the Hog, and the rest were on the Toad. I just kept my head down and stayed persistent.”

Glaze caught a 4-pound, 1-ounce bass – the biggest of the tournament in the pro division – and earned the day’s Boater Big Bass award of $460.

Wayne Hutton of Imboden, Arkansas, caught the biggest bass of the tournament in the co-angler division, a fish weighing 3 pounds, 10 ounces and earned the day’s Co-angler Big Bass award of $230.