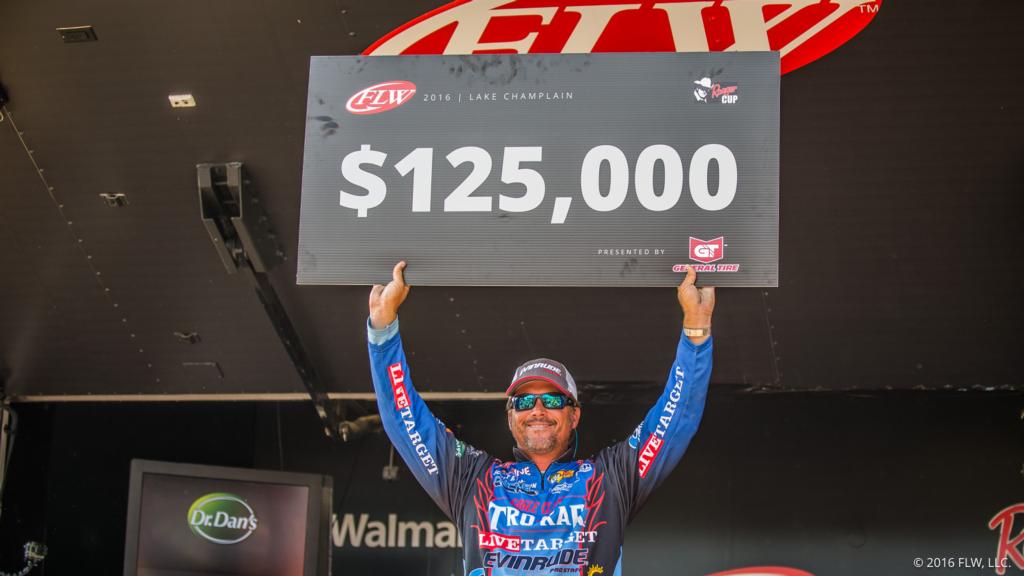 Martin weighed a five-bass limit weighing 16 pounds even to win with a wire-to-wire victory at the Walmart FLW Tour at Lake Champlain presented by General Tire. Martin’s four-day total of 74-10 was enough to earn the win by a 1-pound margin and earn a record-breaking sixth career victory in FLW Tour competition. Three of those wins have come on Lake Champlain.

“This lake has been very special to me over the years,” said Martin, who pushed his FLW career earnings to more than $2.5 million. “I don’t have a secret spot, but I put in a lot of hard work over the years and I truly love fishing here. It’s been a stressful four days, but I fished with a focus and a purpose this week.”

Martin spent most of the first two days of competition targeting largemouth areas on the north end of the lake near Missisquoi Bay. As the tournament progressed into the weekend Martin was forced to scramble and fish for spawning smallmouth.

“I saw that the smallmouth were spawning during our practice period but I also found a couple areas on the north end that were holding largemouth, so I figured that I had the best of both worlds,” Martin said. “Yesterday, when I had some issues, I was able to audible and go to those smallmouth and that’s really what won the tournament for me. It would have been a completely different tournament if I hadn’t caught those smallmouth.”

Martin weighed a mixed bag Sunday consisting of 3 largemouth and 2 smallmouth. He named three baits as being key to his success throughout the week – a Live Target LMB70 crankbait, a ½-ounce green-pumpkin-colored Impact Lures jig with an unnamed creature bait and a white vibrating jig.

“The crankbait was really key for me – especially when I weighed in 22 pounds on day one,” Martin said. “My secondary bait was the jig, but I was doing something a little different. I had the skirt trimmed up real small and compact, and I would bite off most of the creature bait that I was using so the whole presentation was very compact. That made a huge difference.

“I fished hard in this event and left everything on the table,” Martin went on to say. “I wanted to prove to my family and kids that hard work pays off. I prayed to the Lord to bless me and allow me to make good decisions this week and that’s exactly what happened. This win was special.”

Overall there were 50 bass weighing 153 pounds, 10 ounces caught by pros Sunday. All of the final 10 pros weighed in five-bass limits.

Adding another accolade to his illustrious career, Livingston Lures pro Andy Morgan of Dayton, Tennessee, clinched his third Angler of the Year title Friday. Morgan made the top-20 cut in 10th place, guaranteeing him the season-long cumulative points title. Morgan became the third angler in FLW Tour history to win the title three times, earning him a check for $100,000 and an automatic berth into the 2017 Forrest Wood Cup.

Johnston clinched the 2016 Walmart FLW Tour Rookie of the Year award, which is awarded to the rookie pro angler who finishes the season with the highest point total.

Al Gagliarducci of West Suffield, Connecticut, won the co-angler division and $20,000 Friday with a two-day total of 10 bass weighing 33 pounds, 11 ounces, followed by David Hudson of Jasper, Alabama, who finished in second place with 10 bass weighing 31 pounds, 13 ounces worth $7,600.

The Walmart FLW Tour at Lake Champlain presented by General Tire was hosted by the City of Plattsburgh and the Adirondack Coast Visitors Bureau. It was the sixth and final regular-season tournament in the FLW Tour’s 2016 season. The next event for FLW Tour anglers will be the 2016 Forrest Wood Cup Championship presented by Walmart held on Wheeler Lake, August 4-7 in Huntsville, Alabama.

Coverage of the Lake Champlain tournament will premiere in high-definition (HD) on NBC Sports Network (NBCSN) Oct. 12 from 1 p.m.-2 p.m. EDT. The Emmy-nominated "FLW" television show airs on NBCSN, the Pursuit Channel and the World Fishing Network and is broadcast to more than 564 million households worldwide, making it the most widely distributed weekly outdoors-sports television show in the world.