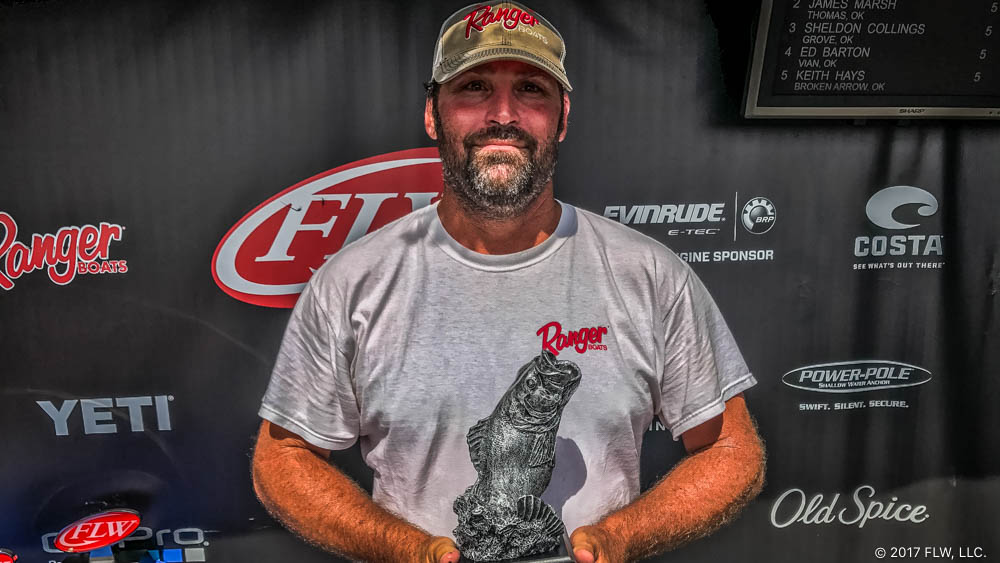 “I started out fishing 6 to 8 miles north of takeoff, on the upper end of the lake,” said Brumnett, who earned his first career victory in BFL competition. “About 20 minutes in I caught a 4-pounder on a football jig, but after another hour or so I couldn’t get a bite. So, I started making my way back down the lake.

“I noticed that they were pulling water, so I went and hit a couple of points that had some big wood on it,” Brumnett continued. “I was throwing a chartreuse and white (Strike King) spinnerbait with gold Colorado blades and I ended up catching a 6½-pounder at my first spot. When I caught that one I figured that is what I needed to be doing.”

Brumnett said that he fished shallow for the rest of the afternoon, targeting fish that were feeding on shad around big wood and bushes. He said that he ended up catching seven keepers on the spinnerbait.

“Near the end I came down close to the check-in and got out on a ledge,” Brumnett said. “I picked the football jig back up and caught a nice one with about 10 minutes to go. That fish won me the tournament.”

Brumnett said his jig that caught his first and last fish was a peanut butter and jelly-colored Jewel Football jig with a Gene Larew Biffle Bug trailer.

Don Benson of Eufaula, Oklahoma, caught a 6-pound, 7-ounce bass, which was the heaviest of the tournament in the Boater Division. The catch earned him the day’s Boater Big Bass award of $655.

The T-H Marine BFL at Fort Gibson Lake was hosted by the Wagoner Area Chamber of Commerce.