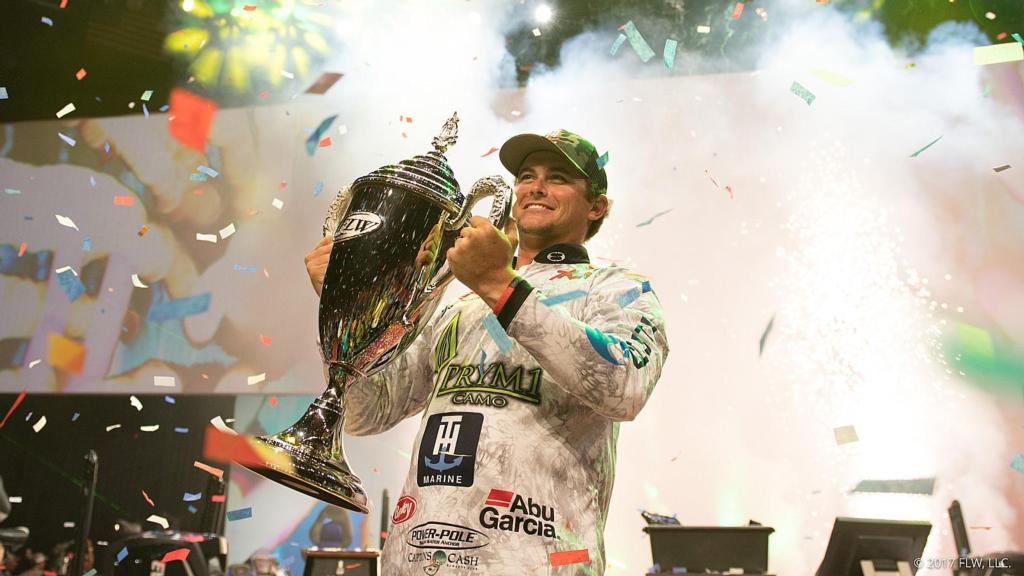 COLUMBIA, S.C. – FLW Tour rookie Justin Atkins of Florence, Alabama, brought a five-bass limit to the scale Sunday weighing 22 pounds, 1 ounce – the second-heaviest limit ever weighed in the 22-year history of the Forrest Wood Cup – to earn the win at the 2017 Forrest Wood Cup on Lake Murray. Over three days, Atkins weighed in 15 fish totaling 59 pounds, 4 ounces to edge out second-place pro Travis Fox of Rogers, Arkansas, by 2 pounds, 9 ounces and win the $300,000 top cash prize. The tournament featured 53 of the top bass-fishing anglers in the world competing for professional bass-fishing’s world championship.

“When I say I feel like this is what I’m meant to do I don’t mean that in any kind of arrogant way,” said Atkins, who became just the third angler to win the Forrest Wood Cup in their rookie season. “I just went out on a limb of faith this year. I didn’t have the money to fish the full Tour when I started. I had enough money to fish about four events, and I was hoping I would make it. I felt like God had a plan, and that’s what I was supposed to be doing. I just went out there and fished, and today signed off that I was supposed to be there.”

Atkins targeted cane piles throughout the week and the fat blueback herring-eating largemouths that hung around them. He estimated that he had about 60 to 80 waypoints on cane piles he liked, and most of the piles topped out about 8 to 10 feet below the surface, rising up from about 20 or 22 feet deep. The fresher and “bushier” the pile was, the more fish were in it.

“I caught every fish that I weighed in this week on an Ima Little Stick 135 in chrome,” Atkins said. “I fished them on a 7:1 gear ratio Abu Garcia reel with 30-pound-test braid and a 7-foot, 5-inch medium-heavy composite rod. I think the key was being consistent and sticking with the topwater bait. My Humminbird electronics really played a role helping me find the brush and the cane piles. Other guys weren’t able to graph them, but my Humminbird could.

“I still feel like I’m in a dream and going to wake up soon,” Atkins went on to say. “To come out on top and win this tournament really just solidifies that I can fish at this level and I’m supposed to be here. I’m already excited to get the season started next year on Lake Okeechobee.”

The top 10 pros at the 2017 Forrest Wood Cup on Lake Murray finished:

Overall there were 41 bass weighing 140 pounds, 5 ounces caught by pros Sunday. Six of the final 10 anglers weighed in five-bass limits.

The 2017 Forrest Wood Cup at Lake Murray in Columbia, South Carolina, was hosted by the Capital City Lake Murray Country Regional Tourism Board. Total attendance for the three-day event was 68,315 fishing fans.

Television coverage of the 2017 Forrest Wood Cup will premiere in high-definition (HD) on NBC Sports Network (NBCSN) Sept. 27 from Noon -1 p.m. EDT. The Emmy-nominated "FLW" television show airs on NBCSN, the Pursuit Channel and the World Fishing Network and is broadcast to more than 564 million households worldwide, making it the most widely distributed weekly outdoors-sports television show in the world.