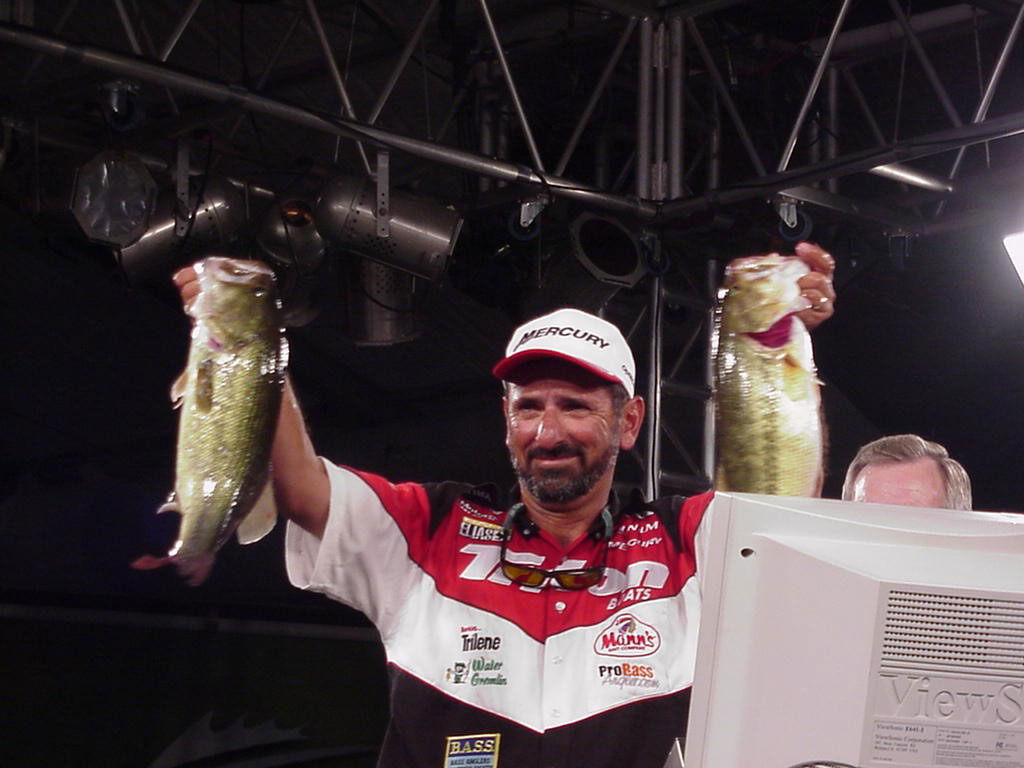 Paul Elias of Pachuta, Miss., shows off part of his extraordinary 18 pound, 4 ounce catch on day one of the FLW Championship. Elias was the overall leader after the first day of competition. Photo by Gary Mortenson. Angler: Paul Elias.
September 13, 2000 • Gary Mortenson • Tackle Warehouse Pro Circuit

SHREVEPORT, La. – Under the backdrop of a sweltering Louisiana sun, Paul Elias of Pachuta, Miss., turned in an equally blistering performance to capture the overall lead in the professional division on the first day of the Wal-Mart FLW Tour Championship in Shreveport, La.

With temperatures blazing into the mid-90s by 11 a.m., Elias fought through the increasingly uncomfortable muggy conditions to record an eye-popping first-round catch of 18 pounds, 4 ounces – more than two full pounds removed from his nearest competitor.

“I’d just as soon have them cancel the tournament today and pay me right now,” Elias joked in the wake of his lead in the standings in the four-day, $450,000 event. “That would be real nice.”

On the co-angler side, Tom Hunley of Stamping Ground, Ky., easily outdistanced the competition with a solid day-one catch of 13 pounds, 12 ounces.

“I left home with every intention of winning this thing,” said Hunley, who officially announced his intention to jump to the professional class of the FLW Tour for the start of the 2001 season. “I know I’m capable of doing this for a living.”

Bernie Schultz of Gainesville, Fla., finished in second place in the professional division with an outstanding first-day total of 15-14 ounces. However, right on his heels in third place was Rick Clunn – perhaps the hottest angler on the entire FLW Tour right now. Clunn, who won two of the last three FLW tournaments and recorded a second-place finish in a third leading up to the championship, recorded a formidable catch of 15 pounds, 4 ounces.

Perhaps even more foreboding for the remainder of the professional field was Clunn’s admission that he wasn’t even close to reaching his peak performance.

“I just don’t feel like I have these fish totally figured out yet,” he said. “I only had six bites today. I’m hoping to catch 10 to 11 pounds tomorrow. It’s the type of tournament where you have to catch one fish an hour.”

Rounding out the top-five professional standings after day one were Larry Nixon of Bee Branch, Ark., and Marty Stone of Linden, N.C., – who each turned in an identical catch of 14 pounds, 11 ounces.

However, there were some disappointments as well. 2000 Land O’ Lakes Angler of the Year Clark Wendlandt of Cedar Park, Texas, finished in 45th place out of 50 competitors with a total day-one catch of 5 pounds, 5 ounces. Peter Thliveros of Jacksonville, Fla., winner of the 2000 ESPN Great Outdoor Games Bass Fishing Championship, came in 47th place with a catch of 5 pounds.

Thliveros said he was “lucky” to catch even five pounds.

“I got to get even luckier tomorrow,” he said.

The 10 anglers with the largest two-day totals will advance to Friday’s semifinal-round of competition. The top five anglers after Friday’s competition will battle for the $250,000 grand prize on Saturday.

FLW Co-Angler of the Year David Hudson of Jasper, Ala., also turned in a disappointing performance with a one-fish catch weighing 2 pounds, 6 ounces. Hudson slipped to 39th place overall.

“In some ways I feel like I almost don’t need to fish tomorrow. But the competition here is too good for me to relax,” said Hunley, who has fished competitively for the last 14 years. “My goal is to fish just as hard tomorrow as I did today. I’m hoping this will be my grand finale before I turn pro next year. I really want to win. And I really need the cash.”

Elias, who turned pro more than 23 years ago, said he was going to continue to approach the tournament from a very tactical standpoint.

“I was real careful not to set my hook on too many fish in practice and it paid off,” said Elias. “My goal today was to catch 14 to 15 pounds of fish and I did it. Tomorrow my goal is to catch about 10 pounds of fish. If I manage to accomplish that, I’m going to pack it in. But you have to be careful not to let up too much. There are a lot of good anglers out here.”

With two “secret” fishing holes that he hopes will carry him through the tournament, Elias says he is poised to make a serious run at the $250,000 first prize.

“It’s a long tournament,” he said. “But right now I feel great.”