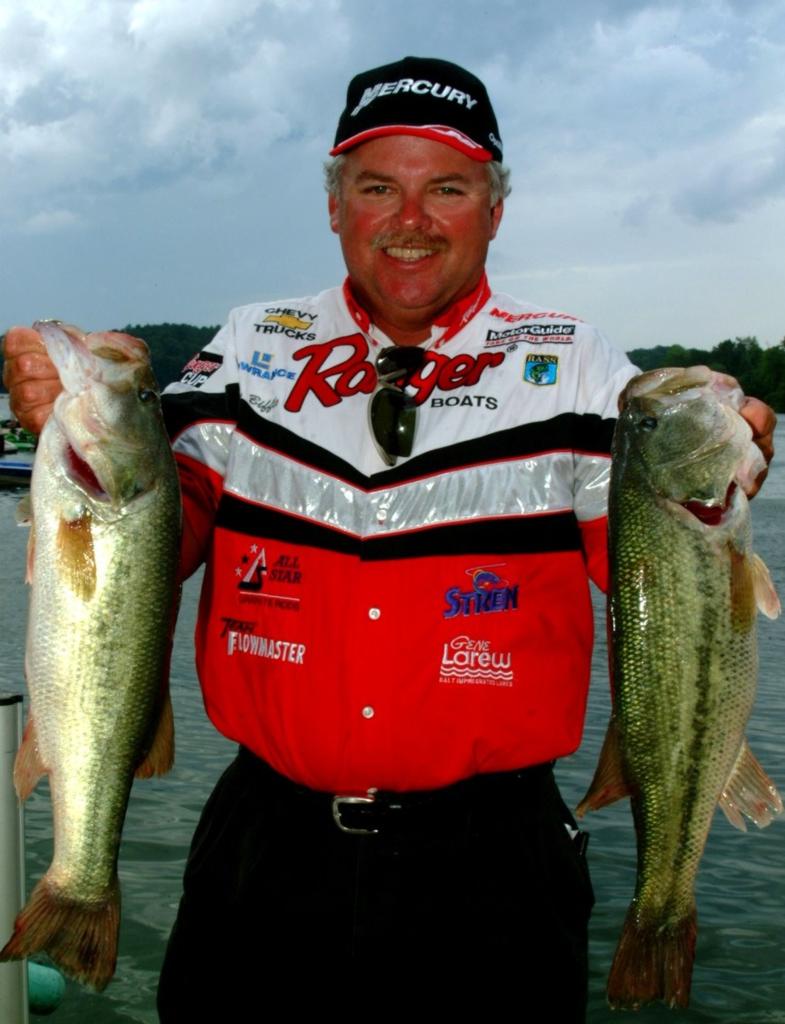 Pro Tommy Biffle quietly caught the two biggest stringers of the week so far –18-13 Wednesday and 19-4 Thursday – and leads the Pro Division by over 6 pounds after the opening round. Photo by Jeff Schroeder. Angler: Tommy Biffle.
June 19, 2003 • Gary Mortenson • Tackle Warehouse Pro Circuit

FLORENCE, Ala. – Coming into the Forrest Wood Open on Wheeler Lake, Tommy Biffle of Wagoner, Okla., knew he needed to fish the tournament of his life to have any chance at the 2003 FLW Angler of the Year title. But while Biffle upheld his end of the bargain, turning in a whopping two-day catch of 38 pounds, 1 ounce to hold onto first place heading into Friday’s semifinals, it wasn’t quite enough to overtake Dan Morehead of Paducah, Ky., in the 2003 Land O’Lakes Angler of the Year race.

Even so, Biffle wasn’t about to complain. After all, with the help of Thursday’s finish, the Oklahoma native had put himself in perfect position to make a run at the $200,000 first-place prize on Wheeler Lake. In addition, Biffle’s performance made him the frontrunner for the prestigious 2003 Ranger Cup – awarded to the top Ranger-sponsored pro in the country.

Not bad for two days of fishing.

“When I left home this week, I told my wife that I was fishing to win this tournament,” said Biffle. “I knew that was the only way I’d have a chance to win angler of the year and the Ranger Cup. Although it didn’t work out as far as the angler-of-the-year title goes, I know I gave it my best shot. I still have a chance to win the tournament on Wheeler Lake and the Ranger Cup. So, overall, I really don’t have any regrets.”

Biffle ultimately finished in fourth place in the 2003 FLW Angler of the Year race.

However, with the AOY contest now out of the way, Biffle said he can really concentrate on the task at hand – winning the title on Wheeler Lake.

“I really feel good about this tournament so far,” said Biffle. “I had a limit by 9:30 a.m. this morning and I know I can catch some fish. I have one pretty good spot that is really working for me. And I have several other spots I haven’t fished yet.”

Biffle said he is targeting bass on grass as well as deep river ledges with a combination of jigs and Carolina rigs. However, as well as he’s done so far, Biffle knows all too well that the tournament is far from over.

“Leading the tournament after the second day is all good, but you have to be leading at the end,” he said. “That’s what’s important.” 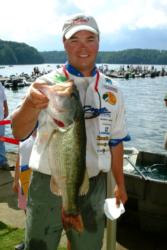 Fishing in only his second FLW Tour event since 1997, BASS superstar Tim Horton of Muscle Shoals, Ala., was determined to make this tournament count. Using a two-day catch of 31 pounds, 6 ounces, Horton stormed into the semifinals, earning his first-ever top-10 cut on the FLW Tour in the process.

Horton said he is fishing a 10-inch Yum worm in a watermelon color almost exclusively, targeting bass in grass beds in about 6 feet of water.

“And I’m going to do the same thing tomorrow,” he said. “The key is just being patient.”

Dion Hibdon of Stover, Mo., qualified for the semifinals in third place after landing a two-day catch of 30 pounds, 8 ounces.

Chad Cook of Summerville, S.C., grabbed the fourth qualifying spot with a total catch of 29 pounds, 6 ounces, while Bill Chapman of Salt Rock, W. Va., earned the fifth qualifying position with a catch of 28 pounds, 12 ounces.

Although it was a hard-fought battle to the end, Dan Morehead of Paducah, Ky., finally emerged victorious in the 2003 Land O’Lakes Angler of the Year competition after holding off a furious charge from some of the top anglers in the nation. The final results, while technically unofficial at this time, are as follows: Morehead (first with 1,048 points); David Dudley of Manteo, N.C. (second with 1,001 points); Clark Wendlandt of Cedar Park, Texas (third with 999 points); Tommy Biffle of Wagoner, Okla., (fourth with a point range of 996-987, depending on his eventual finish in the finals) and Tim Carroll of Owasso, Okla., (fifth with 973 points). 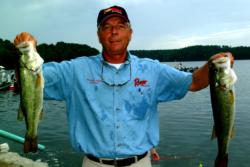 “It’s very exciting,” said Peoples. “I’ve made the cut several times, but I’ve never wound up leading the tournament before. It’s just great to get this far.”

Alex Ormand of Bessemer City, N.C., qualified for the finals in second place after landing a two-day catch of 25 pounds, 5 ounces.

Simon Morrow of Alexander City, Ala., grabbed third place with a catch of 24 pounds, 2 ounces.

Lonnie Fuller, Jr., making his third top-10 appearances of the year, qualified for the finals in fourth place with a total catch of 23 pounds, 12 ounces.

Co-angler of the Year race

The final results for the 2003 FLW Co-angler of the Year race, while technically unofficial at this time, are as follows: Quint Bourgeois of Knoxville, Tenn., (first place with 1,029 points); Greg Lineberry of Galax, Va., (second with 1,012 points); Jason Abram of Bluff City, Tenn., (third with 997 points); Tommy Szwankowski of Hope, Ark., (fourth with 974 points); and Ralph Wilson of Warner Robins, Ga., (fifth with 972 points).

Tomorrow’s takeoff is scheduled to take place at 7 a.m. at Joe Wheeler State Park, located at 4401 McLean Drive in Rogersville, Ala.