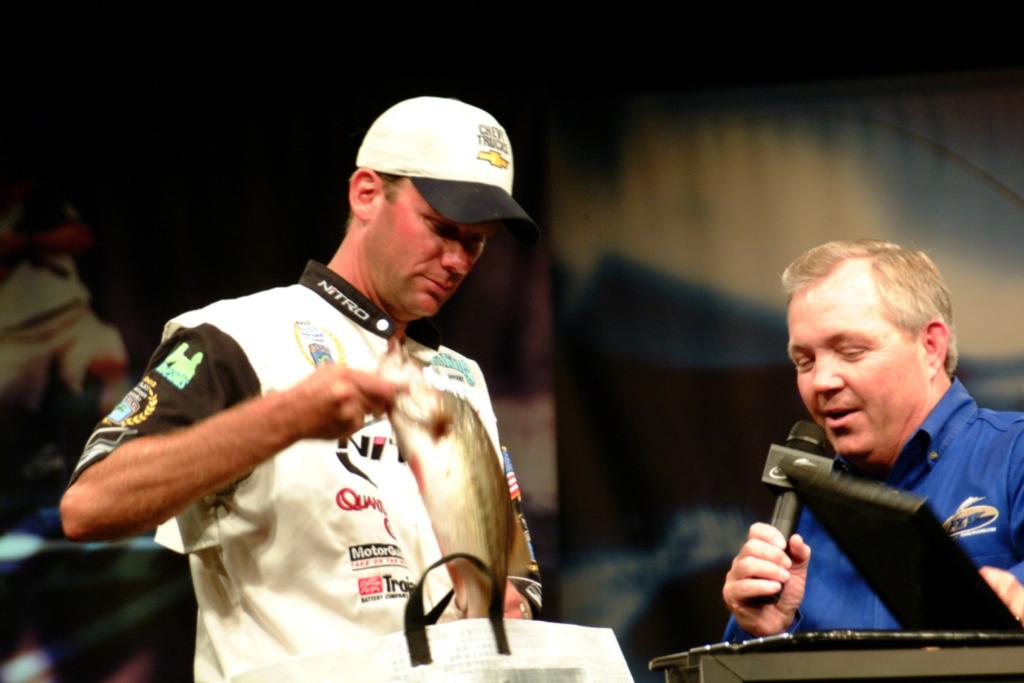 Kevin VanDam weighs in a fish en route to engineering one of the most impressive comebacks in the tournament to date. Photo by Gary Mortenson. Angler: Kevin VanDam.
September 11, 2003 • Jeff Schroeder • Tackle Warehouse Pro Circuit

Welcome back to the fray … There were a few notable comebacks Thursday by pros who bonked on the first day of competition on the James River. One of them was Paul Elias, who caught the smallest keeper bass for a 12-ounce total Wednesday. On Thursday, he mounted a five-bass comeback attack that weighed 12-1 and beat Chip Harrison by over 7 pounds. The biggest rebound, however, went to the indomitable Kevin VanDam, who posted the day’s heaviest weight with five bass weighing 12-13. After day one, VanDam trailed Terry Bolton by 5-12, but ended up defeating him by more than 4 1/2 pounds. Clark Wendlandt, who will face off against VanDam Friday, said: “The thing about Kevin is, if he has one bad day, it’s about 100 percent of the time that he won’t have two in a row.”

Don’t print that: Wendlandt vs. VanDam … Publicly, Wendlandt and VanDam each talked about how it doesn’t matter against whom they’re competing this week, how they’re going to fish against the fish and try to catch as much as they can – blah, blah, blah. But it’s a fact that both of these guys are two of the, if not the top two, fiercest competitors on tour. These two pro anglers have worked furiously over the last 10 years, with similar success, trying to etch their own names into the pantheon of competitive bass fishing. So don’t think for a minute that the magnitude of their head-to-head matchup in the FLW Championship semifinals has escaped their notice. You’re not going to see it between quotation marks anywhere, but word is that Wendlandt and VanDam want to beat each other badly – and for more reasons than just money. There’s a whole lot of pride involved here, and it’s going to come down to whoever wants it most Friday.

Changing tides … Wesley Strader caught the most fish in the opening round with 19 pounds, 14 ounces by stacking two solid stringers together on the tough James River. The affable Strader, who noted that his first-round matchup against fellow Fujifilm team member Randy Blaukat was the second year in a row that Team Fuji has had to fish against itself in the FLW Championship (Wes Thomas and Joel Richardson went at it in 2002), used a slow technique to win in the opening round – he mainly flipped a jig into cover – but wasn’t sure if his pattern would hold up. “I feel pretty good about what I’m doing, but you know how tidal fishing is; all that could change tomorrow,” Strader said.

All it takes is time … When the James River threw its super-high tide at anglers Wednesday, it left many of them befuddled. But leave it to a collection of the top anglers in the world to figure it out in just one day and make the right adjustments. While just two anglers caught over 10 pounds Wednesday, four of them topped that mark Thursday, including Elias and VanDam who both had virtually nothing on day one. Dave Lefebre advanced over Scott Martin with a two-day weight of 9-13, and hinted that things are looking up for him since the tide has shown signs of dropping. “I opened a door today,” he said. “If this tournament was held one week earlier, we would have seen some huge bags. We might see some still this week.” 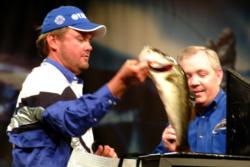 Bittersweet success … Greg Hackney won his marquee matchup against Bill Chapman, which was billed as a flipping showdown. But Hackney caught four of his bass Thursday with a spinner bait. … Chapman notched a two-day weight of 14 pounds, 7 ounces – the 11th-heaviest weight in the opening round – but lost to Hackney’s 18-7. Asked how it felt to fish so well and still have to go home, Chapman said: “It never leaves my mind. It doesn’t feel good. The sad part is that somebody who caught 6 pounds will be fishing tomorrow.” Still, Chapman appreciated what he was up against in his matchup against Hackney. “When I saw that I was paired up against Greg, I knew it was going to be tough. He just got the big bite today,” he said.

More losing winners, bracket-style … Tommy Biffle was the guy who advanced with 6 pounds, which, in fact, turned out to be the lowest qualifying weight. Chapman’s weight, however, wasn’t the heaviest by a pro who missed the cut. That dubious honor goes to Matt Herren, who weighed in 14-14 but lost to Rob Kilby’s 19-6. Besides Herren and Chapman, three more pros were sent to the showers after posting weights over 10 pounds: Tim Carroll (13-14), Aaron Martens (11-5) and Randy Blaukat (10-6). For the record, 10 of the 24 pros who qualified under the bracket format caught less than 10 pounds.

Roommate rumble … Mike Hawkes and Andre Moore are roommates while on tour, but competed against each other this week. The same was true of Cody Bird and Kelly Jordon. All week long, the roommate matchups have been teasing each other about how they were going to sabotage each other’s fishing, like someone dumping popcorn into someone else’s motor assembly, for instance. “I really didn’t do anything that he can prove,” said Hawkes, who won his battle. Jordon was a bit more diplomatic: “I told (Bird) that I hope he wins because it wears him out to no end that I’ve been beating him all year.” Bird did win.

Hudson takes a swim … Co-angler David Hudson was thrown out of Wesley Strader’s boat at takeoff Thursday morning as it hit some boat wakes and pitched at a funny angle at about 40 mph. Fortunately, Hudson was unhurt and he went on to qualify for the co-angler finals in fourth place. “That happens sometimes,” Hudson said. “The keel on those boats are so keen, they’ll just catch (waves) wrong sometimes. That’s why we zip (the lifejackets) up and buckle them up.” 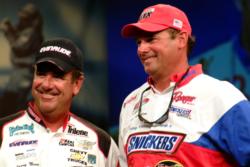 “Larry’s got a bad arm, though. I sure want to shake his hand to congratulate him.”
– John Sappington, defending FLW Championship winner, who faces off against Larry Nixon in the semifinals. Nixon has been fishing with a brace on his arm this week.

“Yeah, I could have caught the fifth one pretty easily, but I figured I had a good lead so I went practicing. Then I shook off a bunch more. You believe that, don’t you?”
– Wily veteran Larry Nixon, playing mind games with Sappington. Nixon only caught four bass Thursday.

“I’ve seen how Larry’s done here in the past, so I’m surprised he’s gotten this far.”
– Sappington, returning the smack talk.