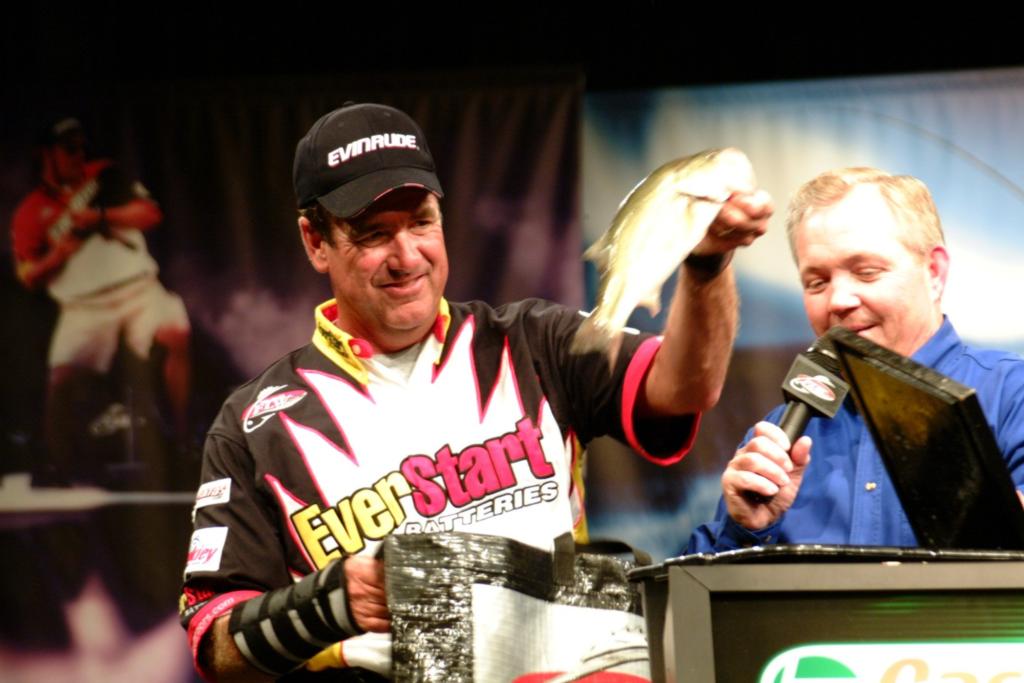 RICHMOND, Va. – It was almost too good to be true. By the end of Friday’s dramatic semifinal weigh-in, bass-fishing fans not only witnessed some of the greatest anglers in the world headed for a collision course in the finals, but they were also treated to a number of almost unbelievable storylines ranging from breathtaking suspense to unimaginable heartache. Throw in some upsets, a hometown hero, tense moments, good humor and a few well-placed 6-pound largemouth bass and it quickly became apparent that only one conclusion could have been drawn from today’s action: Bass-fishing fans got everything they could have hoped for … and more.

Heading into the semifinal weigh-in, the question on nearly everyone’s mind was this: Who would emerge from the so-called “Bracket of Doom?” Would it be two-time FLW Tour Angler of the Year Clark Wendlandt or Kevin VanDam, perhaps the greatest angler in the world over the last five years? In the end, VanDam (6 pounds, 12 ounces) managed to overcome yet another extremely difficult hurdle, fighting off torrential rains, 25-mph winds and, ultimately, outfishing Wendlandt by 4 pounds, 9 ounces.

“It was brutal today,” said VanDam, who saw his chances of advancing almost completely slip away after recording a nearly disastrous catch of 1 pound, 1 ounce on the first day of competition. “It was just one of those deals. You really had to bear down. Clark is a great fisherman, and I knew I’d have to put as many fish in the boat as possible to beat him.”

Wendlandt, as usual, was gracious in defeat.

“It was a tough day for me,” he said. “I was fishing against the best fisherman in the world – it’s one of those matchups you really look forward to. It just didn’t work out for me today.”

With a stamped ticket to the finals already in hand, VanDam assessed his chances of grabbing the $500,000 first-place prize.

“I like to fish fast. My philosophy has always been to put my bait in front of as many fish as possible. But the weather is going to be a big factor for me tomorrow,” said VanDam. “I’ve never won an FLW event before, but if it calms down, maybe the stars will finally align for me. We’ve all been thinking about this day all year. It’s just a great place to be standing right now.” 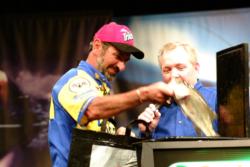 If you had told Paul Elias of Pachuta, Miss., that he’d be able to advance to a championship final and have a shot at winning a half-million dollars with the aid of only one 2-pound, 1-ounce fish, he probably would have told you that you were crazy. However, had you told him that he would also have to overcome being stranded on the water for more than three hours with equipment problems, he probably would have had you committed to an institution. But, if truth be told, that’s exactly what happened.

“I had some problems out there today,” said Elias, in the understatement of the afternoon. “I hit an underwater log in the channel and was stranded for something like three or three-and-a-half hours. I really thought I was in trouble. And then I only get one keeper bite all day.”

Luckily for Elias, his opponent, Wesley Strader of Spring City, Tenn., struggled as well as he only managed to turn in a catch of 13 ounces.

“I’ll tell you what, the rain, the clouds and the wind got me today,” said Strader, who had the largest two-day stringer – 19 pounds, 14 ounces – heading into the semifinals. “This is a humbling sport. Just about the time you think you have everything figured out, things change on you.”

As for Elias, he is hopeful that he will be able to finally make it back to his prime fishing location for the finals.

“I didn’t get to go to my good spot today, but maybe I can get there tomorrow,” said Elias. “This is great, fishing for $500,000. I never dreamed this would happen.”

Heartache and joy against all odds

When Tommy Biffle of Wagoner, Okla., finally walked to the scales, there was little doubt that he knew that he’d had a very good day. And when FLW tournament official Charlie Evans finally announced the results, his suspicion was confirmed. Not only did he record a massive 12-pound, 13-ounce stringer, but Biffle now also boasted the largest sack weighed in during the entire semifinals to that point. Given the fact that only a very select few anglers had weighed in a bag that large all week, Biffle had to like his chances.

But then Greg Hackney of Gonzales, La., approached the scales. After weighing in four decent fish, Hackney reached deep into his bag only to unveil a monstrous 6-pound-plus largemouth bass. The final result: 14 pounds, 7 ounces. As signs of pure joy and simultaneous relief drifted across Hackney’s face, Biffle’s shoulders slumped in defeat.

“It was a bad deal,” said Biffle, who had already endured his fair share of heartache on the FLW Tour over the years, including three (not a typo) second-place finishes in FLW championships alone. “Overall, I had a great tournament and a great year. And Greg has been on fish all week. But when you get this close, it really kind of hurts a little bit.”

But Biffle did get a little revenge. Hackney, who, like Biffle, was pretty sure that he would advance to the finals heading back to weigh-in, said that he nearly had a minor heart attack watching Biffle pulling one monster bass after another out of his bag.

“I was really sweating it out,” said Hackney. “I was guessing that I had something like 12 or 13 pounds and when I saw Tommy on the screen backstage, I really started getting nervous.”

But while Hackney ultimately advanced, the Louisiana native was far from certain about his chances in tomorrow’s finals, despite having arguably the best fishing hole of the entire remaining 12 anglers.

“Honestly, I can’t tell you if I’ll do better or worse tomorrow,” he said. I was getting about 15 bites a day in practice and now I’m down to like five. We’ll just have to see what happens tomorrow.”

And what about Hackney’s giant fish that put him over the top in today’s competition?

“That 6-pounder really came at a good time for me today,” he said. “When I hooked it about noon, I really thought it was a 10-pound fish. I looked at my co-angler and said, `This is a monster.’ But the funny thing is, after I got my limit, I thought I had enough to advance so I did a little practice fishing. But when Tommy started weighing in his fish, I started thinking that I should have fished a little bit harder. I’m really glad it worked out.”

As the only Virginia native to qualify for the championship in the Pro Division, John Crews entered the tournament with a unique kind of pressure. Not only was he expected to do well because he was fishing on his hometown water, but he also entered the tournament with the knowledge that his opening-round rival was none other than Rick Clunn – arguably the best angler to have ever held a bass-fishing rod. Desite the tough odds, Crews (9 pounds, 8 ounces) continued his high-pressure march to the finals by knocking off Mike Hawkes of Sabinal, Texas, by a margin of 4 pounds, 13 ounces.

Now, the biggest test of his young career is ahead of him.

“Every direction you look, there are champions,” said Crews, pointing to the star-studded cast of finalists. “But it’s an honor and privilege just to fish with them. I’m really looking forward to getting out there tomorrow.”

Dudley lends another powerful name to list of finalists

“It was a lot of fun out there today,” said Dudley. “Well, it was fun besides the wind and the rain.”

Dudley, who netted a whopping $700,000 payday in the Ranger M1 tournament in 2002, should be immune to the pressure of fishing in tomorrow’s finals. However, the “Manteo Machine” admitted that he would have to fish better on Saturday if he is to have a chance at the big prize.

“I’m really looking forward to tomorrow,” said Dudley. “But I’ve got to do better than I did today. It’s probably going to take 13 pounds to win and I’m going to have to step it up. I didn’t have a very good practice, but I’m learning more and more as the tournament goes on. We’ll just have to wait and see what happens tomorrow.”

Nixon prepares for a unique interview

As one of the hosts of the “FLW Outdoors” television program on the Outdoor Life Network, Larry Nixon of Bee Branch, Ark., is used to interviewing FLW Tour anglers on a regular basis. However, after defeating 2002 FLW Champion John Sappington of Wyandotte, Okla., and advancing to the finals, Nixon might want to start thinking about how one goes about interviewing oneself.

“I’d have no problem with that,” joked Nixon.

However, although Nixon (8 pounds) easily bested Sappington – who could only produce one 14-ounce keeper in today’s competition – it wasn’t easy on the nerves.

“Everything just got messed up out there today,” said Nixon, referring to the horrendous fishing conditions the semifinalists faced nearly all day. “I really had to scramble. I couldn’t even get my lure anywhere near where I wanted to.”

Not only did Nixon have to brave the weather as well as a wrist injury, but he also had to overcome some psychological gamesmanship from Sappington as well.

“When we got backstage, I kept shaking my bag when Larry wasn’t looking,” said Sappington, smiling from ear to ear as he told the story. “Then Larry would turn his head and I’d stop. Then I’d shake it again. And when I carried my bag (with only a 14-ounce fish in it), I dropped my shoulder down real low like it weighed a ton. Then I’d shake the bag again.”

Nixon ultimately seemed amused by the entire ploy, breaking out into a big grin once he realized he’d been duped.

That’s why they play the game 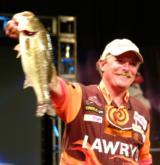 In retrospect, Alvin Shaw of State Road, N.C., probably never really got the respect from pundits that he deserved coming into the championship. However, to his credit, he’s been proving the prognosticators wrong ever since. For starters, Shaw, the 48th and final seed to qualify for the championship, out-dueled Dan Morehead of Paducah, Ky., the No. 1 seed and 2003 FLW Angler of the Year, by 13 pounds and 6 ounces in the opening round. Then, just as efficiently and quietly, Shaw (8 pounds, 10 ounces) defeated semifinalist Dave Lefebre of Erie, Pa., by 3 pounds and 10 ounces to advance to the finals.

And if Shaw has his way, he wouldn’t mind proving the naysayers wrong again tomorrow.

“I’m not fishing for anything other than first place,” said Shaw.

It’s a pretty safe guess that nobody doubts him now.

2003 FLW Championship action continues tomorrow morning with the top 12 finalists squaring off for a one-day run at the $500,000 championship prize. Takeoff is scheduled to take place 7 a.m. at the Osborne Boat Landing, located at 9680 Osborne Turn Pike in Richmond, Va. Anglers qualifying for the finals will have all of their weights reset to zero for the start of tomorrow’s competition.