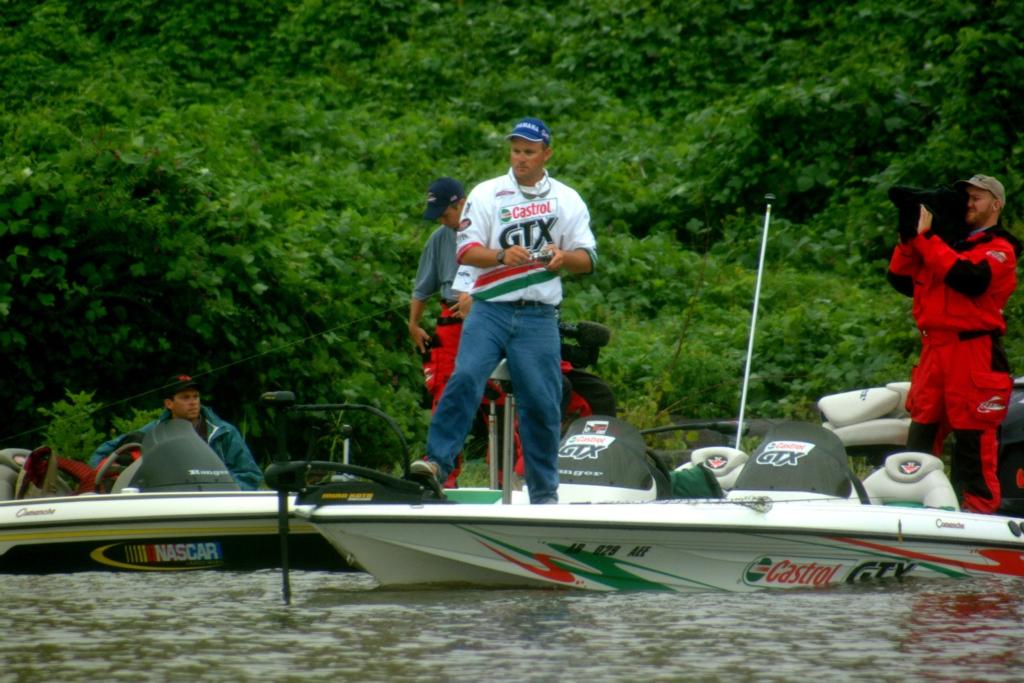 Prince of tides … All week long, David Dudley has quietly pooh-poohed all the complaints about the high tide on the James River, which was a situation that most of the anglers didn’t prepare for in practice. “I didn’t practice as much as I normally do because I knew it was going to change so much,” he said. “But I’ve been going out and learning something new every day.” What he learned was that fish were moving in along a stretch of bank at the mouth of the Appomattox River right at the town of Hopewell. He evidently figured this out somewhere in the first two days, as his weights increased as the week wore on. “Today, I moved around quite a bit, but all of my fish came from the mouth of the Appomattox River,” he said. However he does it, Dudley is certain to be hailed as one of the best tidal-water tournament fisherman of the modern era. In addition to his $500,000 FLW Championship win on the James River Saturday, he won the largest payout ever in bass fishing last year, $700,000 at the Ranger M1, on the Mobile Delta in Alabama – also a tidal bass fishery. 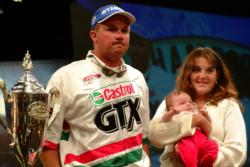 A year to remember … If you throw out his worst tournament, Alabama’s Wheeler Lake, the Manteo Machine finished no worse than 33rd place all year long on the FLW Tour and finished the season second in points. Let’s not forget that Dudley also won the first EverStart Northern Division tournament of the season at Minnesota’s Lake Vermilion in June. In July, Dudley also had his first child, a son. His wife, Angela, said, in the understatement of the day: “Oh yeah, it’s been an incredible year.”

Why Dudley’s so hot … Dudley said that he hasn’t missed a fish all year long. Not a single bass that bit his bait in competition has broken off, come unbuttoned or otherwise not ended up in his boat. That is, until Saturday. Watch the TV broadcast of the FLW Championship and you will see Dudley miss his first fish of the season as he’s competing for $500,000. Needless to say, he almost came unglued, throwing his rod down. But he regained his composure, caught his five bass – the only limit of the day – and went on to win. “I was upset there,” he said later, “but I realized that God’s in control – and He doesn’t make mistakes.” For the record, Dudley eventually lost two hooked bass in the championship finals.

More that got away … Runner-up Harmon Davis fished just across the mouth of the Appomattox River from Dudley Saturday and enjoyed the same influx of bass from the main river channel that the winner did. What he didn’t enjoy, obviously, was coming up 3 ounces short of victory. “I’m not happy, no,” said Davis, who was the 2002 FLW Rookie of the Year and who was fishing in his first FLW final round ever at this year’s championship. “When they announced this tournament last year, I just had the strangest feeling about it that I could win. I’ve never said anything about it until now. So this hurts, but I’ll be back.” What hurt most was the fact that Davis, who only weighed in four bass, lost two keepers of his own Saturday. “It’s simple. If I catch one more for a limit today, I win with over 10 pounds,” Davis said.

This just in from the “How Convenient” department … Castrol was the presenting sponsor for the 2003 FLW Tour Championship. Dudley is Team Castrol’s highest-profile angler. “I can’t tell you how grateful I am to Castrol,” said a teary-eyed Dudley. “They’ve supported me all the way through this.” 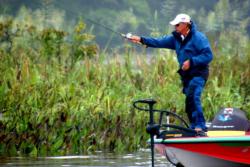 And the contingencies … Greg Hackney, who unfortunately zeroed Saturday, won the Shop-Vac Clean Sweep award for the highest total weight over the first three days. He amassed 32 pounds, 7 ounces Wednesday through Friday. … Alvin Shaw won the Energizer Keeps On Going award for being the angler who came back from the lowest seed to make the finals. Shaw was seeded last in 48th place and finished the week in ninth place. … Andy Morgan won the Snickers Big Bass of the Year award and $5,000 for the 9-pound, 15-ounce largemouth he caught at Florida’s Lake Okeechobee in January.

1.2 million: Amount, in dollars, of the money that David Dudley has won in just two FLW Outdoors tournaments, the 2003 FLW Championship and the 2002 Ranger M1.

8,000: Estimated number of fishing fans in attendance at the FLW Championship final weigh-in Saturday at the Richmond Convention Center. The place was packed.

“Three ounces was the difference between being able to fish for a living and going home and going back to work.”
– Harmon Davis

“I’ve got to work on Monday.”
– David Dudley, when asked what he was going to do next. A professional fishing guide, he has a saltwater trip scheduled for Monday.

“Now I won’t get in trouble for all the shopping I did this week.”
– Angela Dudley, David’s wife

“We were all swinging for the fences, but it seems like a lot of us flied out.”
– Kevin VanDam, explaining why only one finalist came in with a five-bass limit Saturday. Many pros said they were trying to land that one big bite.