Dudley does it again! 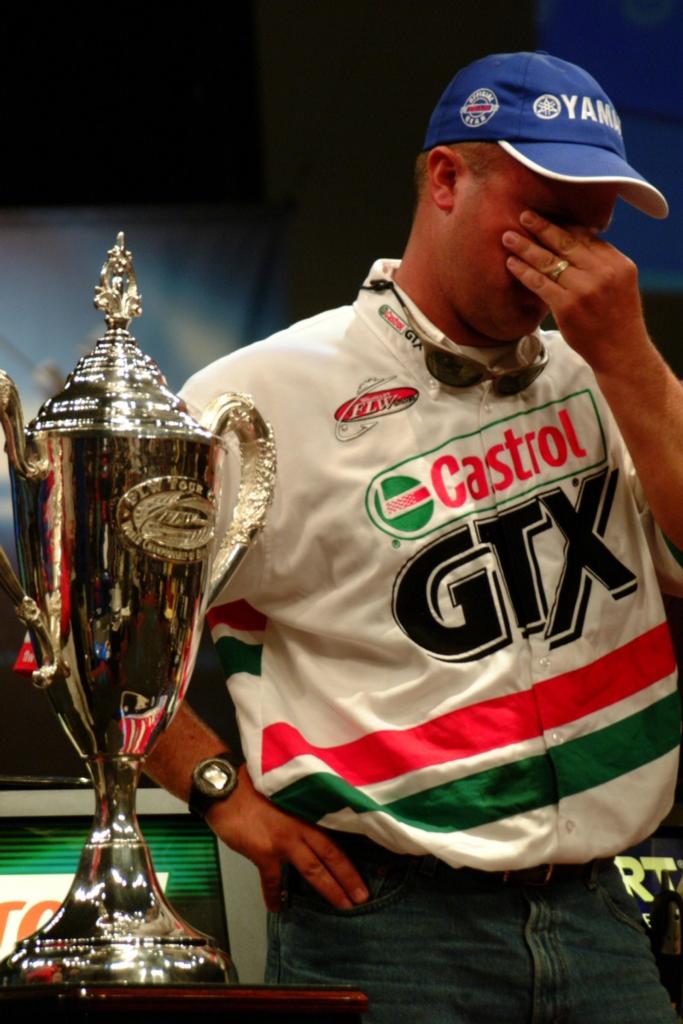 RICHMOND, Va. – With a steeled determination and a poker face that would have intimidated the best card players on the Las Vegas circuit, David Dudley of Manteo, N.C., sat and watched as his main rival Harmon Davis of Marlow, Okla., methodically racked up a 9-pound, 4-ounce limit. At this point, no other finalist but Dudley could mathematically defeat Davis. The tension mounted. Dudley, who had only one fish remaining, desperately needed to come up with at least 2 pounds, 6 ounces to have any shot at the title. But did he have it? Nobody knew … except Dudley, the man who already had a $700,000 payday under his belt for winning last year’s Ranger M1 tournament.

As the crowd watched in nervous anticipation, Dudley walked to the scales, paused and then jerked out a 2-pound, 9-ounce largemouth bass – his fifth and final fish. Dudley pumped his fist. Davis, who had only weighed in four fish of a potential five-fish limit, was now only 4 ounces from victory. However, when Davis reached into his livewell, he grasped only air. Dudley, upon realizing that he had won perhaps the most difficult tournament of his life, thrust his arms toward the sky in victory. In one fell swoop, Dudley became the all-time money leader on the FLW Tour, pushing his career earning at FLW Outdoors and Ranger M1 events over the $1.5 million mark. 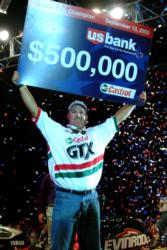 However, when asked to say a few words onstage about his fantastic and historic accomplishment, Dudley – perhaps for the first time in his life – was speechless. As he choked back tears, Dudley tried to regroup. But he failed, over and over again. Finally, after slumping back in his chair in complete exhaustion, Dudley spoke.

“I feel very proud of this win,” said Dudley, who battled a highly competitive field and nasty weather all week to capture the first-place prize of $500,000. “This means more to me than winning the $700,000 at the Ranger M1 tournament because I feel like I really earned this victory. It feels great. This is probably the best win of my career.”

Dudley said that he knew he had a good chance of capturing the title when he saw how high the water had risen earlier this morning.

“When I got to the boat ramp for takeoff and I saw that the water was over the dock, I was really happy,” he said. “I was hoping for high water because I thought that’d really put me at an advantage.”

As it turned out, he was right on.

“People kept talking all week about how tough it was to fish with the tides, but the tides weren’t very important to me,” he said. “The key to this water is figuring out where the fish are positioned in current. Whether it’s high tide or low tide, you still have to understand where the fish are at.” 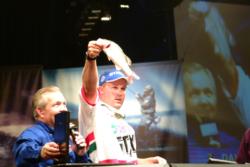 Dudley threw a 1/2-ounce homemade spinner bait with a 6-inch trailer nicknamed the Rabbit Dog Spinner bait to land the majority of his catch in today’s competition. However, Dudley argued that the key to his victory was finding a very unique flat near the mouth of the Appomattox River.

“I found a flat with current and a clean bottom – no muck or dead vegetation – where the fish would migrate to off the main channel,” he said. “On this type of water, you always have to find a spot that’s a migration route for the fish. Once I found it, I knew the spot would keep replenishing itself with fish because that’s the first place they’d go when they came off the channel. When the fish are moving around a lot, you have to find their migration routes.”

Dudley was then asked to put his accomplishment, as well as the tremendous growth of the sport, in perspective.

“It’s taken Larry Nixon, one of the best fishermen of all time, his whole career to win $1 million,” said Dudley. “And it’s taken me just two tournaments. It just goes to show you how far this sport has come. I’m just glad I started my career when I did.”

Unfortunately for the 11 other finalists, they were probably left wishing that Dudley had started his career in 2010. 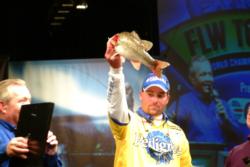 For Harmon Davis of Marlow, Okla., the finals of the 2003 FLW Championship would only be remembered – at least in the short term – as a day of missed opportunities and great frustration.

“This is the only day all week that I didn’t catch a limit and it cost me,” said Davis, who had to settle for a second-place check for $75,000. “Three ounces was the difference between me getting to fish for a living and going home and going back to work. Next week, nobody is going to remember who finished in second place.”

However, Davis acknowledged that he had his chances to win.

“I was on the fish to win this tournament, that’s what’s so frustrating,” said Davis, who currently works as the part owner of a paint and body shop back home in Oklahoma. “I also missed three fish today, at least one of which was a 2- or 3-pounder. And that was the difference. If I catch that fish, I come in with at least 10 or 11 pounds.”

“I had one little creek where I had been catching fish all week,” he said. “The fish were really stacked there. But the tides just went nuts today. I needed to fish the incoming tides and it usually (occurred) around 11 a.m. The tides roared out today, but they didn’t want to come back in. I guess it just wasn’t meant to be.”

Davis said he targeted big slick laydowns with a Bandit crankbait in a Louisiana shad color to land his fish.

Kilby comes up short as well 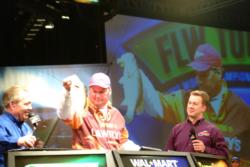 (Photo by Gary Mortenson)” BORDER=”1″ ALIGN=”LEFT”>Rob Kilby of Hot Springs, Ark., had no intention of fishing for anything other than first place. But although he didn’t win the title, he did come away with a pretty good consolation prize – a third-place finish and a check for nearly $41,000.

“I was one of those guys who went for broke today,” said Kilby. “I knew all of my areas were too muddy to fish, so I basically abandoned all of the spots I had found before. I made a run that probably took about one hour and 25 minutes. I also lost a fish that was probably between 5 and 6 pounds. But I knew I was in trouble when I saw the weather this morning.

“I had a little pattern going in the back of the creeks, but the water kind of blew everything out today,” Kilby continued. “I just ran out of fish.”

Kilby, who ultimately recorded a total catch of 5 pounds, 15 ounces, used a combination of Terminator jigs, spinner baits and wooden crankbaits to land his catch in the finals. 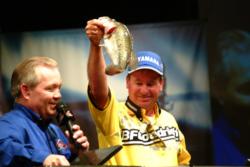 Despite fishing a fantastic tournament, Cody Bird of Granbury, Texas, came up short in the finals.

“I really thought I’d do a lot better today,” said Bird, who recorded a total catch of 3 pounds, 15 ounces to capture fourth place and a check for $35,000. “I caught a 3-pounder right off the bat, and I was feeling pretty good for a while. But things just didn’t work out. I’ve had a good time, but I really wanted to get the lettuce (top prize).”

Shad Schenck of Waynetown, Ind., appeared to be the most upbeat finalist aside from Dudley by the time weigh-in had concluded. Schenck, an up-and-coming young gun on the FLW Tour, ultimately turned in a 3-pound, 10-ounce catch to finish in fifth place.

“It was a remarkable tournament,” said Schenck. “Everywhere I fished today were places where I had caught a big fish in practice. I just couldn’t get the bites. But three of my best friends drove 700 miles to be with me today and that meant a lot. Overall, I had a great time.” 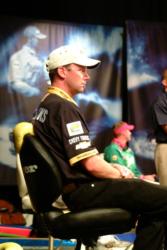 Although Kevin VanDam of Kalamazoo, Mich., has won nearly every prize there is to win on the professional bass-fishing circuit, he again failed to capture the one thing that has eluded him throughout his career – an FLW tournament crown.

“The water just got real muddy with all of that rain so I had to move around a lot,” said VanDam. “But I never gave up. I was casting like a madman all day. I just knew the next stop was where I’d catch a 5-pounder. I spent most of the time trying to find that one magic area, but all I was able to find were two little fish. We’re all swinging for the fences today. I just came up a little short. But I have no regrets.”

The 2004 FLW Tour season will commence Jan. 21 on Lake Okeechobee in Clewiston, Fla.