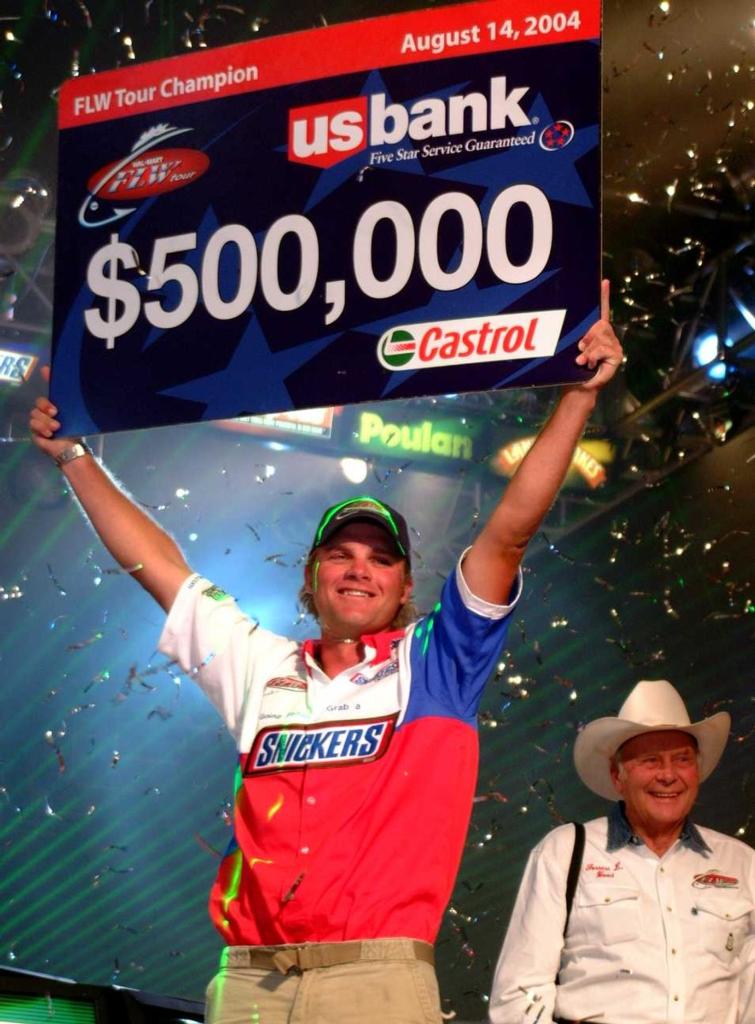 BIRMINGHAM, Ala. – If there were ever any doubts about whether the best pro angler would beat the brackets and win at Logan Martin Lake this week, Luke Clausen put them all to rest Saturday. The 26-year-old rookie pro from Spokane, Wash., led all challengers for the fourth day in a row and won the 2004 Wal-Mart FLW Tour Championship with a five-bass limit weighing 14 pounds, 10 ounces.

Simply put, Clausen was the best angler here this week, and he earned every penny of the $500,000 winner’s check.

“I can’t even believe what’s happening,” Clausen said. “I was so stressed out this morning that I couldn’t even make a cast under a dock. I was so nervous.”

Nervous? Maybe. Rattled? Not even close. Clausen spent the week mowing over some of the toughest competition in the brackets, competition that included a heavyweight shootout with Shad Schenck of Waynetown, Ind., in the opening round and a hard-fought win over Greg Hackney of Gonzales, La., in the semifinals. Clausen caught the heaviest limits of the entire 48-angler pro field three of the tournament’s four days and led in total weight throughout the event. Overall, he caught 55 pounds of bass during the championship.

Not only did the 26-year-old make history as the youngest to win the FLW Championship, he became the first pro to complete a four-day sweep in an FLW tournament. Several have come close since the tour began in 1996 – like David Fritts of Lexington, Ky., and Alton Jones of Waco, Texas – but none have won before.

“I think that’s pretty awesome,” Clausen said. “Everything was just going right for me this week. It’s great to fish against company like this. It’s just amazing.”

What’s more amazing is that Clausen defeated the likes of Scott Martin, Mickey Bruce, Charlie Ingram and Clark Wendlandt, among others, on a lake that he had never even fished before. This was his first trip Logan Martin Lake.

With the way the fishing developed for this tournament, perhaps that played right into the winner’s hands. Water fluctuations – first a drop in water level in the opening round, then a rise on Friday – plus a cold front threw many pros off balance when the tournament started Wednesday. Clausen, however, never strayed from his finesse-fishing pattern around docks, but he did have to adjust every day.

“The day it got overcast, I really struggled until I realized that they were under docks. I caught almost all of my fish off of docks, though I did catch a few off secondary points,” he said, adding that his magic bait was a prototype Reaction Innovations green-pumpkin finesse worm on 6- and 8-pound line. “I would run out of water each day, so I’d go find some more. A lot of fish I was catching were suspended and they were biting it on the fall. I think the light bait was key.”

Clausen said he caught about 10 keepers when it counted Saturday, almost all spotted bass. He caught one largemouth the entire week, he said, which was his big fish this morning.

Clausen’s win capped a triumphant week for West Coast anglers at this year’s championship. The co-angler winner, Stephen Tosh Jr., is from Waterford, Calif., and both he and Clausen came to the FLW Tour this season after posting big numbers in the nascent EverStart Series Western Division the last two years. There, Clausen won the Clear Lake tournament in 2003.

Clausen’s FLW Outdoors career earnings prior to this week stood at $31,500. Now he can tack a big old “5” on the front of that figure.

“This is incredible,” he said. “I don’t even know what I’ll do with the money. I’ll probably put it in the bank and look at the balance every day. The hardest part’s going to be writing that check to the government.”

Clausen had to earn his win Saturday because Scott Martin put up another nice limit – 14 pounds, 4 ounces – and nearly won his second FLW tournament in a row. Last month, Martin won the Forrest Wood Open and $200,000 at Lake Champlain. The son of TV bass legend Roland Martin, the Clewiston, Fla., native won his first FLW event as a pro at the Pascagoula River in 2000.

This week, he earned $50,000 for second place at the championship.

Asked about his hot hand right now, Martin said: “I’ve been getting up really early and staying really late, and it’s paid off.

Gagliardi falls short of No. 2

Another 2004 FLW winner, Anthony Gagliardi of Prosperity, S.C., claimed the third spot with a limit weighing 13 pounds, 7 ounces. Gagliardi, who won at Kentucky Lake in May, added another $40,000 to his career earnings this week.

“I got lucky. I caught two big fish before 9 o’clock,” he said. “It makes for a long day when you’ve got two good fish in your livewell and you’re struggling all day to get some 2-pounders to go with it.”

Jimmy Millsaps of Canton, Ga., delighted the capacity crowd with a crazy catch Saturday, dredging up a log, some weeds and who knows what else in an valiant effort to land a fish. He finished in fourth place with a limit weighing 12 pounds, 4 ounces and earned $35,000.

“This was a heart-attack fish,” he said at weigh-in as video of the catch rolled.

“I had an opportunity for a big stringer today, but a few of them just got off,” he said.

Kevin Vida of Clare, Mich., rounded out his solid week at Logan Martin Lake with another decent limit – 11 pounds, 8 ounces – and finished in sixth place. He earned $24,000.

“What a tremendous fishery this is,” he said. “I’ve never caught spotted bass like this in my life.”

A number of pros admitted to “swinging for the fences” and going for big fish instead of just a limit Saturday. Consequently, the weights fell off in the bottom half of the leaderboard.

Coverage of the Wal-Mart FLW Tour Championship will be broadcast on the Outdoor Life Network on the “FLW Outdoors” television program. A tournament preview show featuring bass-fishing legend Hank Parker will air Aug. 15 at noon CDT and Aug. 19 at 4 p.m. CDT, and fishing fans can watch the tournament weigh-in with hosts Carlton Wing, Taylor Carr and Charlie Evans Aug. 22 at noon and Aug. 26 at 4 p.m. Tournament veteran Larry Nixon will host a tournament wrap-up show Aug. 29 at noon, and that show will re-air Sept. 2 at 4 p.m.