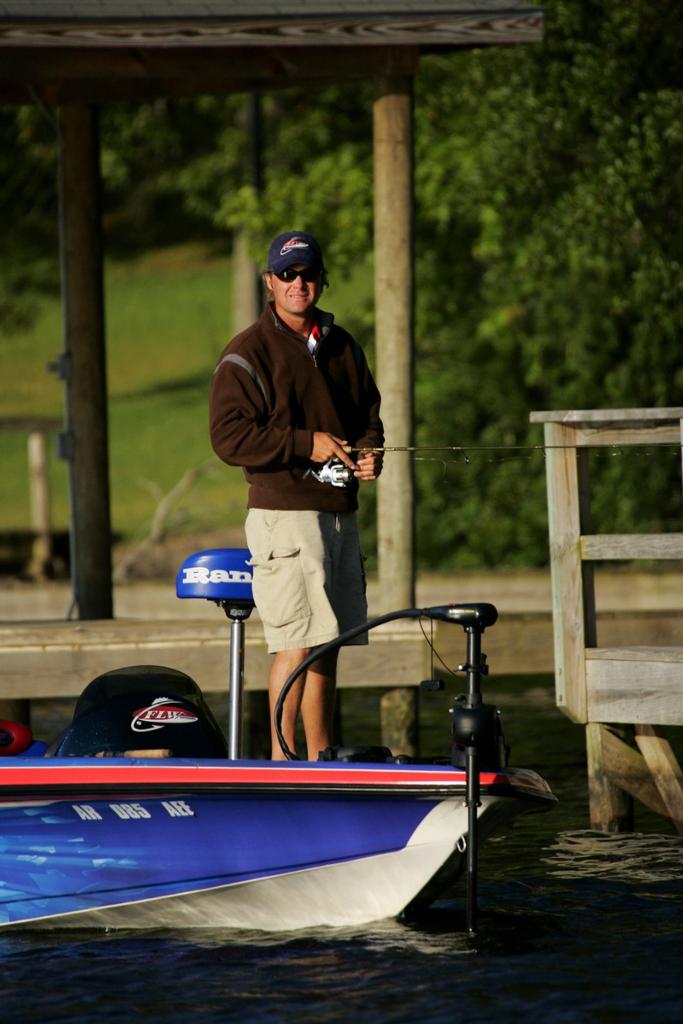 No matter how you slice it, Luke Clausen of Spokane, Wash., dominated the Aug. 11-14 FLW Tour Championship on Logan Martin Lake.

While a 7-ounce margin over Scott Martin of Clewiston, Fla., does not sound like a “domination,” consider that Clausen bested the 14-pound mark three of the four competition days (there were only five limits over 14 pounds weighed in during the entire event), and Clausen’s cumulative weight for four days was 55 pounds even, 7 pounds better than Martin’s cumulative weight of 47 pounds, 12 ounces.

Indeed, Clausen dialed into to a productive pattern at Logan Martin during the dog days of summer when fish have a reputation for being scattered, finicky and generally uncooperative.

The basics of Clausen’s pattern centered on skipping finesse baits under docks. But instead of fishing a hundred different docks a day, he cherry-picked only the best docks and fished them repeatedly during the tournament.

“I think the key for me was spending more time on single, productive docks rather than just fishing down long stretches of docks,” said the Western pro.

Clausen spent six days practicing for the 2004 Wal-Mart FLW Tour Championship. During the first three days, he fished upriver where he found a few shallow fish, but nothing that would amount to more than 10 pounds per day.

When he switched to the lower end of the lake, he struck pay dirt.

“I found better quality fish down the lake from about the park (Pell City Lakeside Park) to the dam,” he said. “I had a couple of 17-pound days, and the fishing down there really fit me better than what I was doing upriver.”

As Clausen practiced fishing along dozens of docks catching one fish here and one fish there, he discovered that certain docks had entire schools of fish under them. 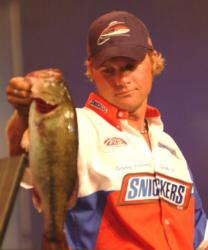 “On several occasions, I’d catch a fish from a dock and there would be five or six with it,” Clausen explained. “And I could get multiple bites off those docks.”

It didn’t take him long to draw upon the similarities of the docks that harbored the schools.

The similarities had little to do with the physical characteristics of the docks in terms of size, shape or age, but rather the bottom contour along the docks.

“A lot of the docks were on flat, featureless banks,” he said. “Most of them would end in 6 to 8 feet of water. But there would be one or two docks along the stretch that had a small, defined lead (ditch or drain) coming from the main lake up against the pilings making it a foot or two deeper, which apparently made a difference because those were the docks that held numbers of fish.”

During the tournament, Clausen would fish his best docks in the morning and then go searching for new docks to add to his milk run.

Another key to Clausen’s dock-fishing efficiency was matching his fishing pace with the activity level of the fish.

“The fish were definitely a lot more aggressive in the morning,” he said. “They would be on the back corner pilings, and they bit the bait on the initial fall. But after nine o’ clock, I really had to be patient and start picking the docks apart. ”

As a result, Clausen would begin every day of the tournament fishing fast and covering his best docks quickly. As the sun got higher in the sky, he would slow down and become more methodical with his presentation.

His primary bait during the event was a prototype finesse worm made by Reaction Innovations. The finesse worm features a fatter head and egg-sack area that keeps the hook weedless, a skinny midsection and a large, bulbous tail designed to wag in the water.

Clausen rigged the green-pumpkin-colored worms weedless on 1/16- and 1/8-ounce jigheads. He fished the jighead worm on 6- and 8-pound-test Sunline FC Sniper fluorocarbon line.

“One is a medium action and the other one is a medium-light action,” he said. “I used the medium-light-action rod for the 1/16-ounce head, so I could really load up the rod to skip it far under the docks.”

In the mornings when he was covering water quickly, he used the 1/8-ounce head on the 8-pound-test line.

Later in the afternoon, when fishing conditions demanded an accurate presentation to the darkest part of the shade under the docks, the 1/16-ounce head tied to 6-pound-test line became his weapon.

However, Clausen put on a dock-skipping clinic that demonstrated his meticulous patience and fishing ability.

Boat position was a critical element of his strategy. He always took the time to position the boat so the craft acted as a blockade against wind ripple, creating a slick spot on the water on which he could skip his bait.

Even though this tactic reduced the ripple, he could not control the bigger boat wakes.

Many of the boat docks on Logan Martin are built low to the water. As a set of boat wakes travels under a dock, it raises and lowers the water line on the dock, making dock skipping a precise timing game. 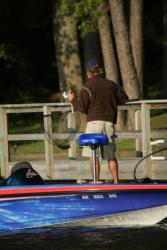 “I had to get my skip casts in sync with the boat wakes,” Clausen explained. “It was to my advantage to time my cast so that the bait was skipping under the dock at the exact second a trough was passing under a dock, because it opened up a bigger gap between the water line and dock. Sometimes I had to try two or three times before I got it where I wanted it.”

Those who know Clausen are familiar with his laid-back demeanor and ability to remain unfrazzled amid chaos. The constant hang-ups and breakoffs that come with skipping docks were a testament to his infallible patience.

“I was breaking off and retying about 25 times per day,” he said. “I would fill my reel spools with new line every night, and by the end of the day, I hardly had any line left on them – that’s just part of it.”

Even more amazing were his nerves of steel while wrestling 3-pound spotted bass from beneath craggy docks on 6-pound-test line.

With $500,000 on the line during the final round on Saturday, Clausen admitted that his cool-as-a-cucumber composure cracked a bit.

“First thing that morning I was pretty stressed out,” Clausen recalled. “Larry Nixon and the camera crew showed up, and I was a little shaken up by it – having Nixon watch you skip docks for $500,000 is pretty unnerving. But once the camera boats and some of the spectators left, I settled back down, got in my groove and caught them pretty good.”