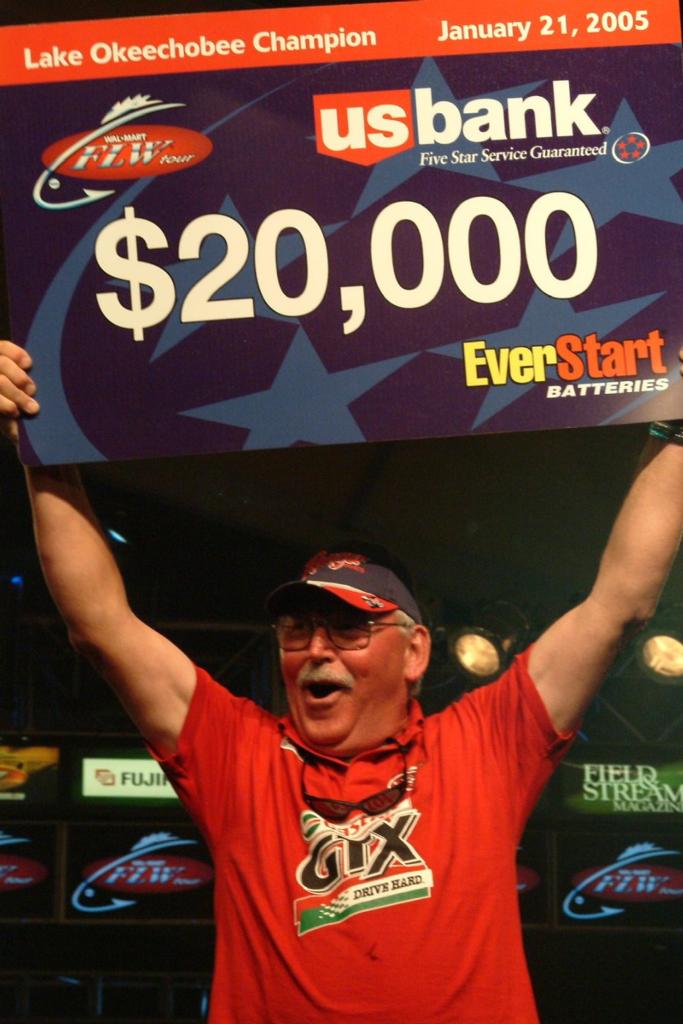 CLEWISTON, Fla. – During Thursday’s weigh-in, co-angler Dwight Ameling of Sebring, Fla., just barely managed enough fish – qualifying by a mere 2 ounces, to be exact – to hang on to 10th place and win a berth in Friday’s all-important finals. Today, however, there was no such drama. In fact, in many respects, Friday’s final contest was pretty much over before it began. Posting a healthy five-fish stringer weighing 14 pounds, 13 ounces, Ameling cruised to victory in the finals, crushing his next closest opponent by more than 11 pounds.

After claiming his first tournament victory on the FLW Tour and netting a first-place check of $20,000, Ameling could barely wipe the smile from his face.

“It’s fantastic. What a scene. What a lake,” Ameling said. “I had a couple of lucky bites. I missed a couple of fish. But I did good.”

Beaming from ear to ear, Ameling said he had a pretty good idea that he’d be in the running for the title heading back to the boat ramp. However, he wasn’t prepared to get his hopes up until the final anglers had weighed in.

“I can’t even believe it,” said Ameling, who qualified for the FLW Tour by finishing eighth overall in the EverStart Series Northern Division points’ competition in 2004. “I knew that I was going to finish high, but you just never know on this lake. As far as I’m concerned, this is like wining the Bassmaster Classic.”

“This is the highlight of my fishing career,” Ameling continued. “My wife talked me into getting into this tournament. She said that I was getting older and that it was finally time to step up to the plate.”

To be sure, Ameling stepped up to the plate in more ways than one. Overcoming some extremely foggy early morning conditions, Ameling and his pro partner realized after the start of takeoff that neither one of them had a net. And it only got worse from there.

“We went back to Roland Martin Marina to get a net. But when we finally started to head out – all of the other boats were gone by this time – we realized we’d lost our camera boat. Apparently the camera boat overheated and we had to go back and find them. By the time we got going again, we probably lost about 30 minutes of fishing.”

Per tournament rules, anglers must remain with their camera boats at all times. But despite the setback, Ameling knew to stay calm.

“I knew we had to put it behind us,” said Ameling, who targeted bass in grass mats fishing a 1-ounce weight and a Baby Paca Craw in melon and summer craw colors. “As you can see, it turned out well. When you make the top 10, you can’t think about anything else but winning. This just feels great.”

Although Jason Knapp of Uniontown, Pa., only managed a catch of 3 pounds, 4 ounces in the finals, it was good enough for a second-place finish and a check for $10,000.

“It was really tough out there today,” Knapp said. “And with my catch, I was thinking that I’d wind up in something like eighth place. So I’m pretty happy right now. I had an awesome tournament overall. It feels unbelievable.”

Knapp, who was targeting scattered hydrilla with a Rat-L-Trap in chrome, gold and black colors, said the season couldn’t have gotten off to a better start.

“This is a great start of the year for me,” Knapp said. “I was thinking that if everything went well this year, I’d try to switch over to the pro side next year. I couldn’t really have asked for a better way to begin the season.”

Dino Caporuscio of Coto De Caza, Calif., couldn’t even believe he got invited to the Lake Okeechobee event – let alone finish the tournament in third place and take home a check for $9,000.

“It’s just awesome,” said Caporuscio, who landed a total catch of 3 pounds, 2 ounces in the finals. “This is my first time here. I’m kind of speechless right now. I tried to register for this tournament, but I really didn’t think I was going to get in. I was all set to fish the Lake Havasu EverStart tournament next week. But then (tournament officials) gave me a call and said I was in. It’s been a great week.”

Caporuscio said he really enjoyed his experience at Lake Okeechobee this week. For starters, he said that he had three great pro partners. And then, he had the pleasure of landing a 9 1/2-pound largemouth in yesterday’s competition. Today’s third-place finish was just the icing on the cake.

“This is my very first FLW tournament and I didn’t think I’d even get in,” said Caporuscio, who targeted bass most of the week with a spinnerbait. “Now, I’m heading straight out to Lake Havasu. I’m only going to have about one day of practice. But you know what, it’s worth it. This is one of the best times I’ve ever had fishing.”

Meanwhile, William Bridges of Tallapoosa, Ga., landed in fifth place with a catch of 1 pound, 8 ounces.

“It was a tough day,” said Bridges, who walked away with $7,000 in prize money. “But I enjoyed myself greatly.”

Rounding out the top 10 co-angler finalists are the following: